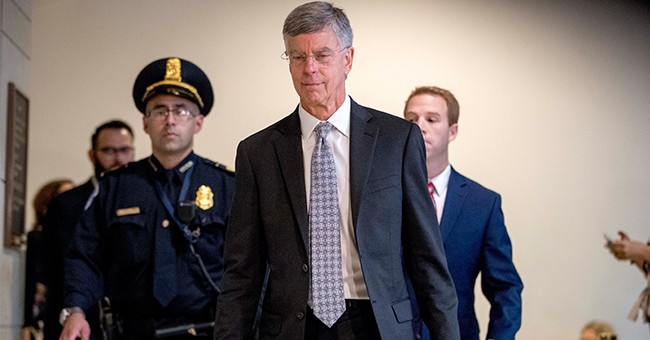 Last evening, following comments from a string of House Intelligence Committee Democrats about the supposedly explosive and potentially game-changing testimony of Bill Taylor, US Chief of Mission in Ukraine, the full transcript of his prepared opening statement was made public.  While it does not, in my view, represent the unequivocal impeachment 'smoking gun' that some are framing it as, it strikes me as powerful and highly concerning.  You can read the entire thing here, and I'd encourage you to do so.

Taylor comes across as a bright, earnest, committed public servant who is motivated by American foreign policy interests, not domestic politics.  His long history of distinguished military and diplomatic service spans administrations from both parties, and his commitment to countering Russian aggression is crystal clear.  Any attempts to attack or smear Taylor for telling the truth -- based on his meticulously-detailed notes -- would be a mistake.  My main takeaways from his opening statement:

In July, to his shock, Taylor learns that Congressionally-approved military aid to Ukraine had been put on hold, indefinitely & for unclear reasons. The Ukrainians would not learn this fact until it was reported weeks later (& weeks after the now-famous Trump/Zelensky call). 3/ pic.twitter.com/ww4xfH96q6

As his fear grew that an inappropriate quid pro quo involving investigations was driving Trump's decisions on military aid, Taylor says he asked Sondland (Trump's amb to the EU) about the issue. Taylor testifies that Sondland confirmed the investigations-for-aid understanding 5/ pic.twitter.com/DXwk03Tcfb

Taylor says he objected to this apparent arrangement, warning (again) that tying US political interests to military aid disbursement decisions would be "crazy." Finally, in early/mid-Sept (following Congressional pressure), the paused aid was finally released & flowed to Kiev 7/ pic.twitter.com/LBO4xHjqVe

This summary thread is also useful.  Now, there are some mitigating factors at play:  First, when Trump administration officials -- including the president himself -- were leaning on their Ukrainian counterparts about the desired investigations (the Biden/Burisma one being far more problematic than the 2016 election meddling one, in my opinion), the Ukrainians did not know that the planned military aid had been paused.  As Marc Thiessen writes today, Ukraine being unaware of the force behind the 'quid' is a meaningful factor, as is the relative appropriateness of the 'quo' (many foreign policy quid pro quos are wholly acceptable and responsible; again, though, a president requesting or demanding that a foreign government publicly announce an investigation into a political rival's family, in the course of conducting American foreign policy, is an illegitimate abuse of power).  I'd add that Ukraine's president has said explicitly that he did not feel undue pressure on this front, even if the 'irregular' US channel was maneuvering to apply said pressure -- up to and including helping to draft a statement for Zelensky.

Second, despite a lack of a public announcement from Zelensky on the investigations (which would have 'boxed in' the Ukrainian leader, Trump reportedly said), the aid ultimately did flow to Ukraine.  If there was supposed to be an arrangement, it fell apart.  And third, is there any compelling case that Taylor may have misinterpreted the "stalemate" line, which is a pivotal phrase in all of this?  We need more testimony.  On the other side of the ledger, simply chanting the words "no quid pro quo," even in real time, does not mean there wasn't a quid pro quo, in practice.  Taylor's testimony strongly suggests that there was an undeniable and problematic quid pro quo in the works, even if it eventually failed or was abandoned, for reasons that remain mysterious.  But wait, did Taylor's account fall apart under skeptical questioning?

“The truth is, in two minutes, John Ratcliffe destroyed this witness. There is no quid pro quo” pic.twitter.com/O6yb8FFJYH

Kevin McCarthy said something similar.  Ratcliffe, I'll note, won plaudits from many conservatives for his feisty back-and-forth with Robert Mueller in July.  If Taylor's case was "destroyed" during the closed-door hearing, I'd love to see what was said, and assess the exchange for myself.  The problem is that House Democrats' secretive process has obscured the full picture of what's happening.  As public opinion is being shaped, voters are only seeing what Adam Schiff allows or wants them to see, with the rest of it -- including potentially key back-and-forths with lawmakers that could puncture or refute various narratives -- remaining shrouded from view, under the rules.  Schiff has offered various excuses for conducting virtually all of his committee's impeachment work behind closed doors, but even if taken at face value (I do not assume good faith on his part), they pale in comparison to the priority of transparency.

I'm open to the argument that Republicans are griping loudly about the process because the substance is difficult to defend or nearly impossible to spin.  I'm also open to the argument that countervailing information is being wrongfully withheld, which would be of a piece with other alleged Schiff machinations.  House Democrats should entrust the people with this judgment by making full transcripts public -- both from testimony that has already occurred, as well as moving forward.  In short, Taylor's allegations should be taken very seriously, and more witnesses should be called, or re-called, in response to them.  We should also see what else he had to say off-script and how he responded to challenges.  I'll leave you with this analysis, which is worth your while:

"[Trump] wanted a commitment. Either a public statement or the formal reopening of the probes by the Ukrainian government. Perform your labor, then you get your compensation. Quid pro quo."https://t.co/4IxSlIxCmS