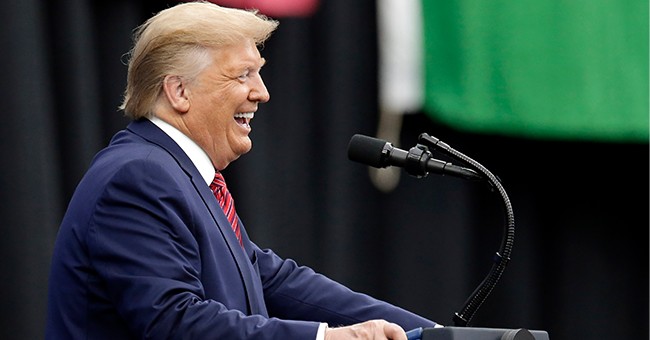 There's a lot of statistical noise out there, so I wouldn't get too swept up in any individual poll -- especially as many Americans are still trying to figure out what to make of the Ukraine situation, and impeachment more broadly.  Virtually every major pollster has measured a clear uptick in support for at least launching an impeachment inquiry, though other surveys have asked different variations of impeachment-related questions (unsurprisingly, there's more popular support for beginning an inquiry than for removing the president from office).  A brand new batch of numbers from The Hill's pollster shows Trump's overall approval rating surging to one of its highest levels of his presidency:

President Trump’s approval ticked up to 49 percent — its highest mark this year, according to a new Hill-HarrisX survey released on Wednesday. The figure marks a 2-point increase from a Sept. 11-12 poll, but a 2-point decrease from its previous peak of 51 percent last August. Trump's disapproval rating, meanwhile, dropped to 51 percent, which marks his lowest level so far this year. The nationwide survey was conducted on Sept. 28 and 29, less than a week after House Democrats launched a formal impeachment inquiry into Trump over concerns raised in a whistleblower's complaint about the president's communications with Ukraine.

Contrast that finding with Monmouth's latest outcome showing Trump flat, and both Gallup and Rasmussen tracking Trump's standing downward.  A fresh national survey from USA Today finds plurality support for impeachment, including for removing Trump from office, but fewer than 40 percent of respondents say there's sufficient reliable evidence for doing so.  As I said above, many people are still puzzling through these questions and waiting for more information, but some of the trends among independents should be troubling to the Trump campaign.  This is also an interesting nugget from the internal data:

52% believe that Trump asking Ukraine to investigate Biden is an abuse of power compared to just 21% who don't.

That said, 42% believe there are valid reasons to look into the Bidens compared to 21% who do not.

Definitely an interesting pair of questions.

No wonder the Biden campaign is trying to reset its (thus far tepid) response to this controversy with some more fiery rhetoric.  There is real danger in this story for him, too, and they're finally realizing it, aided by a still-surging Warren campaign.  Read Josh Kraushaar's analysis of the categories of impeachment bellwethers in the Senate, with this in mind: Major developments could swing events heavily in one direction or the other, depending on certain factors.  For instance, the emergence of evidence of a clear quid pro quo involving the withholding of Congressionally-authorized military aid to Ukraine (which we don't yet have, and reasons to doubt that it exists) would be devastating for Trump.  Cutting the other way, a damning Inspector General report on the Russia probe (with Durham's wider review pending) could at least deflect the glare of misconduct and potential abuses back to Trump's opponents.  Stay tuned, as they say.

Meanwhile, as larger elements of the public have started to favor at least an impeachment inquiry, Republicans are targeting vulnerable Democrats on the issue, turning the screws on a few dozen Democratic House members for whom the I-word is a source of particularly acute anxiety:

"The GOP ad campaign is unnerving to some Democrats." - @washingtonpost https://t.co/vGYUmovj5a

Here is part of Team Trump's messaging against impeachment:

'Gotchas' everywhere, right?  Well, maybe partially.  Counter-point: The Clinton impeachment involved very different circumstances and facts, so using Democrats' previous warnings against impeachment in this context amounts to an argument that going through the process of removing a president from office is always wrong -- on the grounds that invalidates a free and fair election.  It sidesteps the substance of what is considered the impeachable offenses.  Counter-counter-point: As Kenneth Starr reminded my radio audience yesterday, Bill Clinton committed crimes, whereas President Trump's misuse/abuse of power on the Ukraine call doesn't appear to have actually violated the law (pending additional details).  It's true that the House doesn't need to cite a literal crime in order to impeach a president, but it seems very unlikely that the Senate would find 67 votes to boot a president from office over non-illegal misconduct.  I'll leave you with this:

Kind of hard for Team Trump to make this case when he's out there yelling "TREASON" everyday.

Pelosi is good at this game, they should, at least rhetorically, follow her lead. https://t.co/2qt4F3oIBh

Parting thought: Is the House conducting an "impeachment inquiry" in name only?