Detroit Debate II: Biden Does Better, But He Really Isn't Very Good At This 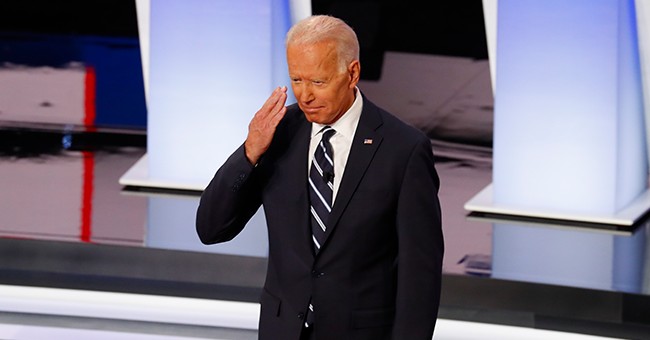 Two days and nearly six hours of live coverage later, we are finally through with July's round of the Democratic debates.  Republicans' first televised forum of the last cycle came toward the end of the first week of August 2015.  As we enter that same month in the current cycle, Democrats have already had four debates.  It's all too early, both debates were too long, and there were far too many candidates involved.  That will all finally start to change before the next battle arrives in September, thanks to more stringent qualification thresholds.  As for last night, my quick reactions were as follows:

Biden escapes mostly unscathed, compared to last time. He still does not strike me as a strong, confident, sharp candidate.

Rough night for Harris, punctuated by the Tulsi hit.

Booker will probably get a bump.

Joe Biden is, and will remain, the frontrunner -- at least for the time being, and perhaps for the distance.  He was flat-out bad in Miami, but was better prepared last evening, helping him survive quite a lot of incoming fire.  He counter-punched here and there, blunting and parrying certain attacks more effectively than he did last time.  But I'm just going to say it: To me, he really reads like a genial old man who's past his prime, and might be on the verge of being well past his prime.  He is not sharp.  He is not quick.  He uses filler words and labors to organize his thoughts and sentences.  He stops talking mid-sentence when his time has expired, almost as if he's relieved that he doesn't have to keep going.  It's entirely conceivable that he will be considered the safest and most viable choice for the Democrats, will lead wire to wire, and will be nominated.  It's also conceivable that he could be underwhelming as a general election candidate in some significant ways, yet still win.

But once again, despite his relative improvement, Biden's overall performance -- setting ideology completely aside -- would not give me confidence about entering a bruising general election slog with him at helm.  It's a feeling I had watching him last month, and I just felt it again.  Even the flubs during his closing statement ("eight more years" of Trump, and the text message debacle) invoked images of an aging actor who couldn't remember his lines, and a grandparent who doesn't understand texting.  It feels a bit mean and unseemly typing those words, frankly, but it's right in front of us, yes?  I'm not alone in seeing these things, right?

Kamala Harris breezily lied and distorted repeatedly, without being called on it, yet she still had a decidedly bad outing.  Her healthcare "plan" is a mess that she doesn't seem to understand (is this her sixth stance now?), and she got wrecked by Tulsi Gabbard on criminal justice issues.  That exchange really drew blood because she'd been posturing as such a champion on that front in order to juxtapose herself with Biden, then the Hawaii Congresswoman blew up that facade, pointedly and effectively.  The Californian later seemed to vanish for long stretches of time, almost like she was a non-factor.  It's too early to declare the 'Harris moment' over, but she's already receded to her previous status in the polls.  Detroit probably won't help reverse that backslide.  And this isn't an attractive attitude:

Man, Kamala on CNN just now dismissed Tulsi's attacks on her criminal justice record by saying "obviously, I am a top tier candidate" and that Gabbard is just at "0 or 1 percent."

Cory Booker's style does not appeal to me at all, so I have trouble assessing whether he's connecting with others.  His whole schtick is grating, like he's trying way too hard, all the time.  He swings wildly from positioning himself as a happy uniter, to calling Republicans "enemies" and "complicit in evil."  Nevertheless, my sense is that he helped himself tonight and may have earned a bump.  Not on the order of Kamala's win last time out, but a positive step.

Tulsi Gabbard will be remembered for her dead-eyed skewering of Harris.  Biden should send her a bouquet of flowers.  Some of her other answers sounded fairly sensible, but then she went and reminded us that she's an Assad apologist and an Iran enabler, and even accused President Trump of "supporting Al Qaeda," so there's that.

Andrew Yang seems like a nice and smart fellow.  His attention to the shifting future of the American employment landscape is important.  Some of his responses to questions posed to him are deft.  But he sounds like a one-trick pony with his endless references to his Big Plan of cutting $1,000 monthly checks to every American, which almost nobody takes seriously, and rightfully so.

Julian Castro is auditioning for Vice President and he's done enough to remain in the mix for anyone who becomes the nominee.  His cringey 'adios to Trump' line might as well have been, "remember, top tier competitors, I'm Hispanic!"

Michael Bennet gave a few solid answers from the center-left perspective, and won the crowd over on a race relations question, but he's not long for this field.  Neither is Bill DeBlasio, whose relentless unlikeability is almost impressive.  Jay Inslee, despite his executive experience and demonstrable progressive record, isn't catching on. And Kirsten Gillibrand is just the worst.  Her oft-repeated point that she won a conservative House district earlier in her career serves only to remind everyone that she used to pretend to have different views and values.  To call her a pandering climber would be a gross understatement.

CNN devoted maybe 10 minutes out of nearly three hours to foreign policy.  That's indefensible.  But hey, at least we got a Mueller question this time.  I'm not sure how things will shake out, but if I were Elizabeth Warren's team, I'd be feeling pretty good today.  I'll leave you with this polling nugget, which directly contradicts the anti-private insurance ravings of the hardcore single-payer crowd -- and also represents a warning to all the other Democrats who favor a deeply private coverage-eroding "public option" Medicare for All alternative:

Kamala is just a trainwreck on this issue:

WATCH: Kamala Harris confirms she will take away the private health insurance plans that 150 million Americans have through their employer.

If you like your plan, you don't get to keep it. pic.twitter.com/6oZjkUYQPQ