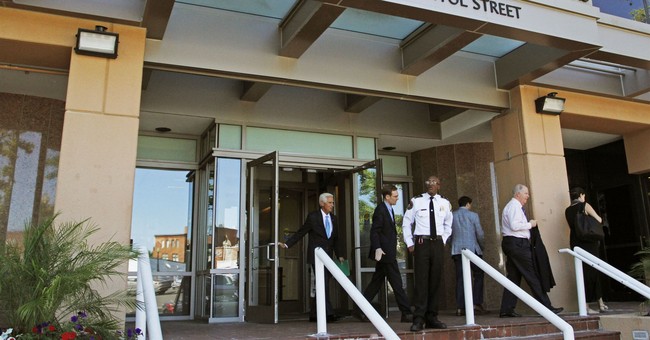 One suspects that Democrats will start marching to the same beat sooner or later, as the task of defeating President Trump will overwhelm all other simmering internal tensions, but that moment evidently has not yet arrived.  Setting aside the whole Squad debacle, the chairwoman of House Democrats' campaign arm -- which had a very good cycle in 2018 -- is trying to beat back an insurrection within her ranks over the issue of diversity.  Politico reports:

The Democratic Congressional Campaign Committee is in full-blown turmoil. Democratic Congressional Campaign Committee Chairwoman Cheri Bustos (D-Ill.) was set to make an unplanned trip to Washington from her district Monday amid an outcry from top black and Latino lawmakers over a lack of diversity in the campaign arm's senior management ranks. Bustos’ sudden return to D.C., just days after Congress left for a six-week-long August recess, comes as aides and lawmakers are calling for systematic changes to the DCCC, the party’s main election organ. POLITICO reported last week that black and Hispanic lawmakers are furious with Bustos’ stewardship of the campaign arm. They say the upper echelon of the DCCC is bereft of diversity, and it is not doing enough to reach Latino voters and hire consultants of color. In addition, several of Bustos’ senior aides have left in the first six months of her tenure, including her chief of staff — a black woman — and her director of mail and polling director, both women. In the most dramatic move so far, Texas Reps. Vicente Gonzalez and Filemon Vela told POLITICO Sunday that Bustos should fire her top aide, DCCC executive director Allison Jaslow.

Much of the tension and emotion boils down to unvarnished identity politics -- or at least that's how the sniping is being framed.  I have no special insight into what else may be driving these conflicts, but professed anger over skin color is the rhetorical terrain on which these skirmishes are being fought:

“The DCCC is now in complete chaos,” the pair said in a statement to POLITICO. “The single most immediate action that Cheri Bustos can take to restore confidence in the organization and to promote diversity is to appoint a qualified person of color, of which there are many, as executive director at once. We find the silence of the Congressional Hispanic Caucus on this issue to be deafening.” In response to the outcry, Bustos has agreed to participate in diversity and inclusion training for DCCC employees. An August training had previously been scheduled for just staff...Bustos’ return to Washington comes on the heels of an emergency all-staff meeting Friday after the POLITICO story published. Jaslow cried as she assumed blame for the lack of diversity in the DCCC, according to multiple people in the room. Others felt the DCCC misled them in its handling of a staffer, Tayhlor Coleman, who posted derogatory tweets about LGBTQ people and Latinos nearly 10 years ago. The all-staff meeting was “very emotional all around,” according to a committee aide. Multiple employees of the campaign arm got visibly upset...Some employees expressed anger during the meeting that the campaign arm’s executive and deputy directors are not people of color. Others complained that only a small number of people of color are in positions reporting directly to Jaslow

What strikes me as I read this story is that there do not appear to be substantive complaints about the success or effectiveness of the DCCC under Bustos. The midterm cycle produced a blue wave of gains, after all. There are some complaints mentioned in the Politico report about a vendor blacklist (with the DCCC refusing to contract with firms that are helping any challengers defeat incumbents), as well as grousing over Bustos working to re-elect one of the last pro-life Democrats in elected federal office (then backtracking, under pressure from the abortion lobby).  But in terms of explicit demands, the majority of the quotes in the piece involve people making demands about the skin color composition of the team.  As I've written before, this is the world Democrats have created for themselves:

Multiple Democratic sources said they left Saturday's call feeling like little is actually being done to address the diversity issues that have been simmering for months, or that Bustos understands the totality of the problem. Since POLITICO’s initial report, multiple Democratic lawmakers privately questioned the DCCC’s claim that 13 out of 27 senior staffers are racially diverse, saying only a few of those are actually working in the upper ranks of the campaign arm. During the call Saturday, several staffers demanded an “immediate restructuring” of the senior DCCC leadership team to make it more diverse.

Meanwhile, over at the DNC, a reminder that things aren't going terribly well:

INBOX: In the definition of a Friday Night News Dump, the @DNC reports raising just $9.5 million in June and has just $9.3 million cash on hand. The @GOP has at least $43M cash on hand. #Roadto2020 pic.twitter.com/5ZZFaDs5uH

And moderate Democrats keep fretting, publicly, about the direction of the national party's policy and rhetoric:

?? Democrats “expressed deep concern that this week’s debate in Detroit will feature another inevitable shift to the left, one that will alienate swing voters in battleground states like Pennsylvania, Michigan, and Wisconsin.” https://t.co/KhTdPKhlGc

Centrist Democrats say the last debate was, even for a primary, unusually fixated on subjects that either didn’t interest or outright repelled voters in the middle of the political spectrum...Even more alarming, they said, was the speed at which some once-fringe issues were widely adopted by the presidential field, like decriminalizing border crossings.

I'll leave you with a word of caution for Republicans tempted to gloat over Democratic dysfunction: I cannot recall a less functional national campaign than the Trump 2016 effort, which got vastly outspent and out-organized. And won. Sometimes, the national mood and the desire for change can overcome traditional institutional factors. There will be an exceptionally strong desire on the center-left to dislodge and replace Trump. That passion should not be underestimated.