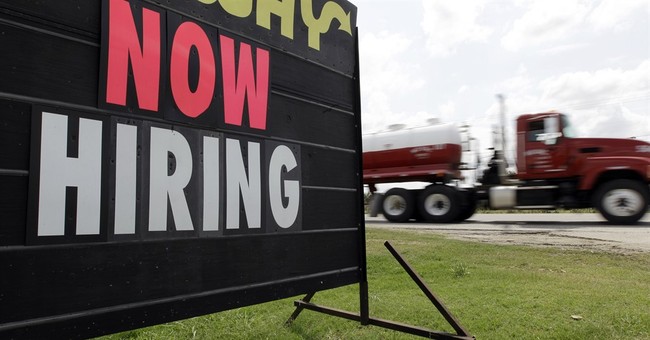 One of the trickier bits of political positioning facing Democrats this cycle is how to talk about the American economy.  By nearly every metric, it's performing quite well.  Unemployment is low, growth is pretty strong, wages are rising, the stock market is up -- and we're in the midst of the longest overall US economic expansion in recorded history.  Roughly 70 percent of voters are optimistic about both their personal financial situation and the national picture, and a relatively unpopular president consistently earns his highest marks on this issue, which happens to be at the top of the pile in terms of importance.  2020 Democrats, unable to laud the successful GOP tax reform law or President Trump's reduction of burdensome regulations, are instead attempting to downplay the extent to which the economy is thriving.  The Wall Street Journal's editorial tackled a number of these claims.  The editors begin by laying out Democrats' complaints:

Democrats running for President see America as a Dickensian nightmare of inequality. It’s the best of times for millionaires and billionaires, and the worst of times for everybody else. Time to wake up from the Barack Obama economy, folks, and admit how many more Americans are prospering from the faster economic growth and tighter labor market after the policy changes of 2017...“Who is this economy really working for? It’s doing great for a thinner and thinner slice at the top,” Massachusetts Sen. Elizabeth Warren declared at the debate. “When you’ve got a government, when you’ve got an economy that does great for those with money and isn’t doing great for everyone else, that is corruption, pure and simple.” Sen. Cory Booker, who hails from high-tax New Jersey, moaned that “I live in a low-income black and brown community. I see every single day that this economy is not working for average Americans.” California Sen. Kamala Harris added: “You ask [the President], how are you measuring the greatness of this economy of yours? And they point to the jobless numbers.”

Their statistics-based response to Sen. Booker:

Start with Mr. Booker’s claim that minorities are being left behind. Really? The jobless rate for blacks is 6.2%, which is only 2.9 percentage-points higher than for whites versus a 4.6 percentage-point difference before the start of the 2008 recession. Unemployment has fallen twice as much among blacks as whites since December 2016. Nearly one million more blacks and two million more Hispanics are employed than when Barack Obama left office, and minorities account for more than half of all new jobs created during the Trump Presidency. Unemployment among black women has hovered near 5% for the last six months, the lowest since 1972, and a mere 3.5% of high school graduates are unemployed.

And what to make about Kamala's point about people working multiple jobs -- a variant of which she has previously been fact-checked over?

But what about Senator Harris’s assertion that folks are stringing together jobs to make ends meet? About 5% of Americans hold more than one job, and this rate has held relatively constant since 2010. Yet there are now 1.3 million fewer Americans working part-time for economic reasons than at the end of the Obama Presidency. A tighter job market is also pushing up wages for the average Cory or Kamala. Average hourly earnings for production-level manufacturing workers have grown at an annual rate of 2.8% during the Trump Presidency compared to 1.9% during Barack Obama’s second term. Production-level manufacturing wages have accelerated even faster in Pennsylvania, Michigan and Indiana. (See the nearby chart.) While parts of Appalachia continue to struggle from a decline in coal mining, shale-gas drilling has created thousands of jobs including downstream in pipeline construction and petrochemicals—all of which Democrats want to kill.

Finally, on income inequality -- Warren's hobby horse -- the Journal runs through the actual outcomes of conflicting approaches to economic policy.  Results over rhetoric:

The Obama Democrats talked constantly about inequality rather than growth, and the result was less growth and more inequality. The Trump Administration has for the most part focused on growth. Its policy mix of deregulation and tax reform has unleashed more private investment and job creation that has lifted productivity and wages for the non-affluent. The result has been faster growth and less inequality. Corporate profits have grown four times as much during President Trump’s first two years than during Mr. Obama’s second term. Yet investor dividend payments increased more during the Obama Presidency as businesses pulled back on investing in equipment, buildings and workers. There are no guarantees this growth will continue, and bad trade and monetary policy could derail it. But the Democrats now running for President want to return to the Obama policy mix of high taxes, willy-nilly regulation and income redistribution, and more of it. To win the economic argument they have to deny the reality that Donald Trump’s policies are helping the Americans that Democratic policies left behind.

The warning about bad trade or monetary policy threatening the strength and durability of the ongoing expansion is an important one.  One of the most disconcerting critiques of the Trump economy isn't that it's not really working for people, because it clearly is -- but rather, that it won't last. Things are undoubtedly cyclical, and no president can control wider economic forces, beyond implementing advantageous or deleterious policies.  If the economy softens considerably over the next 15 months, this president will very likely fail to win a second term.  But is that likely?  A number of experts, some of whom have frequently seen their expectations surpassed in recent years, say so.  But a recent New York Times report points to the strong June jobs report easing fears of trade wars hampering bottom-line progress.  And this op/ed posits that the consulting boom has had a real impact in helping businesses make better logistical decisions about inventory and other planning matters, keeping balance sheets more stable across multiple industries:

.@AndyKessler has an explanation for the durability of the current economic expansion. Well worth the read. https://t.co/bvxfwCC0h7

I'll leave you with a final policy note.  Democrats are universally supportive of hiking the federal minimum wage, but the nonpartisan (but not infallible) Congressional Budget Office says such a move would imperil more than one million American jobs:

It's settled science that minimum wage increases benefit some workers, but directly harm others by raising the cost of employment.  Jobs are eliminated (sometimes through automation), hours are reduced, consumers' costs go up, and the difficulty of finding entry-level work is increased.