Don Jr. to Alabama: Roy Moore is Doing a Disservice to All Conservatives and Spreading Fake News 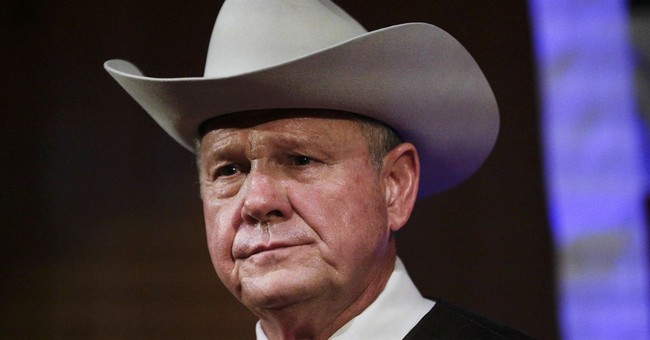 Disgraced former judge, shameless bigot, proven creep, and established loser Roy Moore has decided to cross President Trump and virtually the entire Republican Party by once again running for US Senate in Alabama.  Moore infamously managed to lose Jeff Sessions' old seat to a Democrat last year, squandering what should have been a slam dunk in a state Trump carried over Hillary Clinton by nearly 30 points.  GOP voters in the state ignored the president's endorsement, and multiple warnings from the national party, in the previous primary process, resulting in an electoral catastrophe.  Moore was a disastrous nominee, combining strident extremism and prejudice with a cringeworthy scandal about which he lied and misdirected.  Liberal Doug Jones won the special election, thanks to quite a lot of anti-Moore crossover support.

Jones is highly likely to lose in 2020, an outcome that could help Republicans retain the Senate, which is very much undetermined.  Perhaps the only way Jones could cling on is if the fatally-flawed Moore somehow persuades Alabama Republicans to once again endanger a Senate seat by selecting him as their standard bearer.  President Trump has very explicitly urged Moore not to run this time (Moore didn't even concede his last race, making him the Stacy Abrams of the Right, except his loss was in a crimson red state), but the twice-suspended ex-judge evidently doesn't care.  And he's trying to pretend that he's not flouting the president's wishes with his newly-announced campaign, but Don Jr. is having none of it:

Other elements of the party are similarly uniting against Moore, a crank who has already directly proven that he's capable of handing this "safe" seat to the Democrats.  Much like his effect on high school girls, Moore would yet again make this seat unsafe:

“Give me a break. This place has enough creepy old men," said Sen. Martha McSally (R-Ariz.) when asked about Moore's candidacy. ?@burgessev? https://t.co/evhKiR15ZH

I made my strong opposition to Moore crystal clear long before his penchant for dating and harassing (and allegedly much worse) high schoolers as a thirty-something was revealed.  He was already unacceptable in my book, but the scandal put lots of other conservative voters -- especially females -- over the top.  Given the serious and heavily corroborated allegations against him, this quote feels like positively virtuosic unintended comedy from the man himself, as he sets out on his breathtakingly dumb and arrogant vanity campaign:

Asked what he'll do differently now versus his 2017 Senate bid, Roy Moore says: "I would like to make more personal contact with people."

A few months ago, I explained why Moore is fairly unlikely to reach a general election this time around, even if a fraction of Alabamians are misguided enough to drag him to a GOP runoff.  Still, voters should take no chances. One additional wrinkle to consider: Might Jeff Sessions come home and seek his old seat?  He's reportedly not ruling it out:

“Sessions I don’t think has ruled it out,” Sen. Richard C. Shelby (R-Ala.) told reporters. “I’ve talked to him about it. I think if he ran he would be a formidable candidate, formidable. I’ve not encouraged him to run, but he’s a friend, and if he ran I think he’d probably clear the field.”…Shelby said Wednesday that he would not support Moore, a former chief justice of the Alabama Supreme Court, for the Senate seat.

Sessions, like virtually every single eligible citizen of the state, would be preferable to Moore.  I'll leave you with this all-time classic flashback: