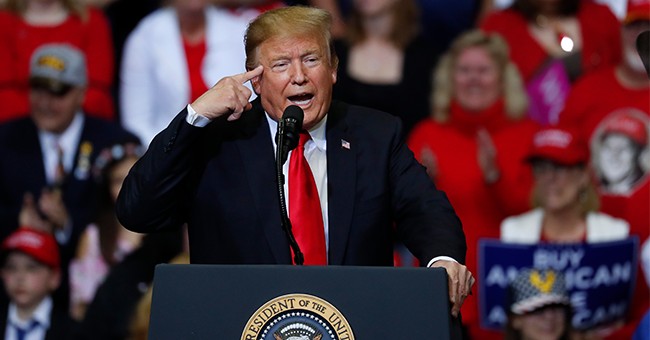 Ever since President Trump decided that his administration would endorse a lawsuit seeking to strike down Obamacare as unconstitutional -- reportedly over the objections of several high-ranking White House and GOP officials -- Democrats have been licking their chops.  Despite foisting a deeply-flawed, promise-shattering healthcare law upon the public just a few years ago, the opposition party exploited (exaggerated and inaccurate) fears of lost coverage and reversed pre-existing condition protections to gain a clear advantage on the issue during the 2018 election cycle.  Trump's latest gambit has allowed Democrats to enthusiastically resurrect their potent talking points, racing to corner and batter Republicans over a potential legal outcome that many expert say is unlikely to transpire.

As a matter of immediate policy and politics, Trump's strategy is mystifying.  Republicans would much rather be talking about the economy, or warning against Democrats' march toward single-payer healthcare, than re-litigating and re-living their "repeal and replace" failure.  It is interesting, for instance, that the party that insists Obamacare is working and must be protected is also trending rapidly toward their own legislative project of uprooting and discarding the law -- which would outlaw private coverage for 177 million Americans, and require massive across-the-board tax increases to fund its proposed government takeover.  These are huge vulnerabilities, and the GOP knows it.  Democrats would love nothing more than to sidestep those problems by making 2020 into a sequel of 2018 on the healthcare front.  So why is Trump going down this path, promising a big, beautiful, tremendous Obamacare replacement plan...that won't be voted upon until after the next election?

Everybody agrees that ObamaCare doesn’t work. Premiums & deductibles are far too high - Really bad HealthCare! Even the Dems want to replace it, but with Medicare for all, which would cause 180 million Americans to lose their beloved private health insurance. The Republicans.....

....are developing a really great HealthCare Plan with far lower premiums (cost) & deductibles than ObamaCare. In other words it will be far less expensive & much more usable than ObamaCare. Vote will be taken right after the Election when Republicans hold the Senate & win......

....back the House. It will be truly great HealthCare that will work for America. Also, Republicans will always support Pre-Existing Conditions. The Republican Party will be known as the Party of Great HealtCare. Meantime, the USA is doing better than ever & is respected again!

It's true that premiums and deductibles have soared on the individual market under Obamacare, crushing the "Affordable" part of the "Affordable Care Act."  It's also true that many Democrats' preferred outcome is Socialized healthcare, ripping away virtually every private plan in the country, with which the overwhelming majority of beneficiaries are satisfied.  But what is this magic healthcare plan that Republicans are supposedly developing?  They had years to craft a consensus replacement proposal for Obamacare, then famously whiffed on achieving their campaign promise in 2017, when they controlled both houses of Congress.  Does anyone believe that a hypothetical GOP bicameral majority would be prepared to pass a fresh, popular, agreed-upon bill in early 2021?  Phil Klein notes that we've seen this movie before:

There's a well-earned credibility problem here.  Nevertheless, the status quo is still far too expensive for far too many people, and Democrats have demonstrated a willingness to sustain major electoral losses in order to pull the country leftward via a major healthcare overhaul.  Single-payer, and its various precursors, represent a real threat.  Opposing a fatally flawed proposal with no alternative is a recipe for further disaster.  The editors of National Review argue that regardless of Trump's dubious boasts, it's still the case that Republicans have a duty to follow-through with affirmative healthcare reforms of their own:

President Trump has tasked three Republican senators with coming up with a replacement for Obamacare if courts strike it down. It’s a prudent contingency plan. Republicans should, for that matter, advance their own health-care plan even if the lawsuit fails — as it is highly likely to do, in part because it lacks legal merit...Republican senators are not notably eager to take up this assignment; their leader Mitch McConnell has suggested that the Senate will wait for the White House and the Democrats to reach a deal before it tackles health care. Republican strategists say the senators are right: Why put forward a plan and open Republicans to attack over it, when the party can concentrate instead on making the case against Democratic proposals to kick Americans off their health insurance and move toward a government monopoly? Why should Republicans reprise the experience of 2017–18, when they bled public support while trying to pass a health-care bill, spent the next election on the defensive on the issue, and then lost dozens of House seats?

A flaw in this cynical calculation is that Republicans cannot prevent Democrats from attacking them over health care by abandoning the issue; if that strategy worked, the 2018 elections would have gone very differently... What is most important is that Republicans not ease into the posture of merely holding off the next Democrat-led lurch to the left for a few years, and that conservatives not let them. As unhappily as it has been received, President Trump’s challenge to his party is a welcome one.

One Republican lawmaker from Arkansas has introduced the 'Fair Care Act,' which would keep a fair amount of Obamacare's infrastructure in place -- while removing and altering some of its elements, and enshrining a number of changes the Trump administration has implemented through executive action.  One headline described the plan as "retain and retool," rather than "repeal and replace."  Click through for a fairly detailed summary, which includes increased federal funding for high-risk pools, repealing several mandates and taxes, maintaining pre-existing conditions protections, and making tweaks to Medicare and Medicaid.  Whether or not one agrees with the broad outline of this bill, or any of its individual provisions, it's a good-faith effort at crafting a credible plan that Republicans can run on and defend.

The inescapable reality is that some of Obamacare's pieces have proven politically-impossible to reverse, even as much of its design and regulatory overreach continues to poison the system.  It's also absolutely inarguable that healthcare will be a top-tier issue again next year.  Fighting an important election while offering no meaningful solutions on a key issue to voters would be both a policy abdication and a political mistake.  As uncomfortable and painful as it may be, the GOP must bring something coherent and workable to the table, or else Democrats will again pound them with old talking points, distracting from their own horrific ideas that even Nancy Pelosi appears to fully understand to be quite dangerous to her party's electoral prospects.  I'm therefore glad that this project is underway:

MITT ROMNEY is involved in "preliminary discussions" about coming up with an ACA replacement plan, his office confirms to us. https://t.co/A5bDXrPsMR

Romney seems to grasp that approaching large swaths of voters empty-handed on issues of widespread concern is not a viable political strategy.  The GOP should of course seek to avoid unforced errors, and should remain on offense against the ruinous 'Medicare for All' fantasy, but they also need solid, tangible response to the challenge, "but what are you for?"  Trump may be not be a strategic thinker, and his recent legal gambit may be the result of impulsive partisan signaling -- but even if he's blundered into it, forcing his party to confront a huge issue and abandon its cowering posture of avoidance, could end up being a net benefit.