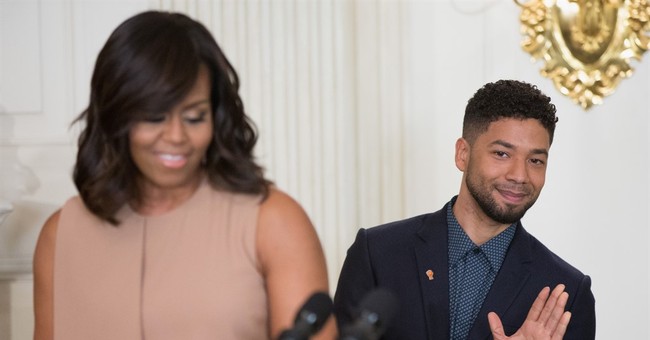 Chicago is still reeling from yesterday's extraordinary development in the Jussie Smollett case, in which the office of the State's Attorney chose to drop all 16 felony charges against the disgraced actor.  This set off a volcanic and irate reaction among other city authorities, especially within the police department.  Aside from letting Smollett off with a tiny slap on the wrist (in the form of previously-completed community service with Jesse Jackson's organization and the forfeiture of his bond), prosecutors failed to even force the hoax perpetrator to allocute to his crimes and apologize.  This led to a stomach-turning victory dance in which he and his legal team pretended that he was innocent.  Furthermore, State's Attorneys convinced a judge to seal all the case records, thus attempting to guarantee that the public would never see the extent of the evidence that had been gathered against Smollett's fraud.  ABC News reported this shocking detail last night:

Cook County clerk’s office tells @ABC they were shocked that no written motions were filed with the court in connection with today’s surprising dismissal in the Smollett case. On top of that, the case has been wiped off their database as if it never existed. pic.twitter.com/KFKJp9yt7h

Someone is desperate to memory-hole this case as comprehensively as possible.  Remember, S.A. Kim Foxx supposedly recused herself from the entire matter after it was revealed that Michelle Obama's former Chief of Staff -- on behalf of the Smollett family -- had privately attempted to intervene in the case (Foxx also texted and spoke with a relative of Smollett's).  Foxx's office ended up pursuing a course of action that Smollett's family could only have dreamed of, complete with blocking access to the diligently-gained proof of his crimes.  The prosecutors are not saying he's innocent, mind you.  Just the opposite:

"Do you believe that he is innocent?" CBS reporter @adrianasdiaz asks First Assistant Cook County State's Attorney Joseph Magats about dropping charges against Jussie Smollett. "I do not believe he is innocent," Magats responds. pic.twitter.com/NEWZuD2aBe

The Chicago Police have already called for a federal investigation into Ms. Foxx, and a spokesperson for the department retweeted a Chicago Tribune story about growing tensions between cops and prosecutors.  Chicago media are starting to ask pointed questions:

Cook County State’s Attorney Kim Foxx—a self-styled “reformer” who gained office largely by riding the wave of justified outrage over the Laquan McDonald scandal—appears to have pretty much botched that task in her office’s handling of the high-profile Jussie Smollett case. By first intervening with police on Smollett’s behalf and now allowing her top assistant to dismiss a 16-count felony indictment against the tall-tale-telling “Empire” actor with the lightest of slaps on the wrist, Foxx has endangered her political future and, more important, faith in the local justice system. “The office owes the public an explanation,” former Foxx chief deputy Eric Sussman told me in a phone interview late today. “I agree with the mayor. It looks like a whitewash.” It sure does.

Kim Foxx’s office didn’t merely drop all the charges against Smollett, not long after Foxx began playing “Obama Celebrity Friends” with former first lady Michelle Obama’s onetime chief of staff. Foxx’s office dropped the charges, yes. But also as part of the deal, he will be wiped clean. His lawyers want his record expunged. That could happen as soon as today. The stain of the 16 counts in the indictment will be scrubbed right off him. You might say Foxx is bathing him in the waters of the Chicago Way, cleansing him, and making a new man out of him. And now he’s smirking at the city, the mayor, the cops, everyone.

Unless some better explanation surfaces, here’s the lesson of this weird turn in the Smollett case:
You can contrive a hate crime, make it a national news, get caught and-if you are a well-connected celebrity-get off for $10K and have your record expunged and files sealed.

Yesterday on Twitter, I reported that a Chicago source told me that the police were absolutely disgusted by what had happened, predicting a "very ugly leak war."  Lo and behold, a Chicago blog published the cops' full investigative file on Smollett earlier today, apparently in response to a FOIA request.  This isn't everything, but it's a lot more than we've seen previously.  While some Chicago operators are working to erase Smollett's crimes from the public record, others seem to have quite different priorities:

Both files show a request to "reclassify" the Jussie Smollett incident from "aggravated battery" to a peace violation (false report), based on indications as early as January 31(?). Also note, FBI was involved and requested results of a CPD search executed on Smollett's iCloud. https://t.co/DZvL4qK7Ea

I'll leave you with Kim Foxx's excited tweet about the presidential campaign of her mentor, Kamala Harris, as well as this rub-it-in trolling from Smollett's camp:

Jussie Smollet and his legal team say they are “weighing our options” and could file lawsuit after charges against the "Empire" actor were dropped yesterday.https://t.co/dobxZrMAJl

This is surely a bluff.  Smollett's lawyers know that the discovery process would be an unmitigated disaster for their client, but even floating the prospect of suing the city Smollett defamed is a final middle finger, just to make sure there's no doubt about the breadth of their' victory.'  It's taunting, not a real threat.  Either way, it's disgusting.  I'll leave you with Chicago prosecutors' four-page summary of Smollett's coordination of the fake hate crime. As you read it, it's hard not to grow angry over the fact that the very officials who relayed this evidence then decided to do nothing about it, failing to even wrest a public confession from the hoaxer.  Why?