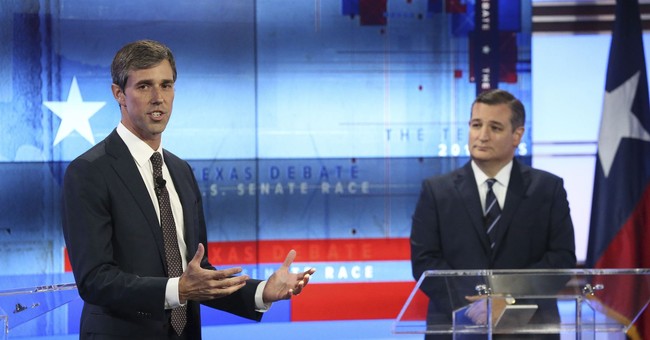 Shortly after Beto O'Rourke announced his 2020 presidential campaign, Reuters broke a fairly shocking news story about the former Democratic Congressman.  We now know that O'Rourke was a member of a notorious secret online hacking ring known as the Cult of the Dead Cow.  The public was already aware of O'Rourke's previous arrests for DUI (an incident in which he attempted to flee the scene) and burglary, but this revelation was not reported prior to the 2018 Texas Senate election:

While a teenager, O’Rourke acknowledged in an exclusive interview, he belonged to the oldest group of computer hackers in U.S. history. The hugely influential Cult of the Dead Cow, jokingly named after an abandoned Texas slaughterhouse, is notorious for releasing tools that allowed ordinary people to hack computers running Microsoft’s Windows. It’s also known for inventing the word “hacktivism” to describe human-rights-driven security work. Members of the group have protected O’Rourke’s secret for decades, reluctant to compromise his political viability. Now, in a series of interviews, CDC members have acknowledged O’Rourke as one of their own. In all, more than a dozen members of the group agreed to be named for the first time in a book about the hacking group by this reporter that is scheduled to be published in June by Public Affairs. O’Rourke was interviewed early in his run for the Senate.

His fellow hackers weren't the only ones who "protected O'Rourke's secret," possibly out of reluctance to "compromise his political viability." We have now learned that the reporter who broke this scoop learned of it back in 2017 while researching for a book he was writing -- and explicitly agreed to withhold the information from the voting public until after O'Rourke's electoral match-up with Ted Cruz was over:

“I decided to write a book about the Cult of the Dead Cow because they were the most interesting and influential hacking group in history. They illustrated a lot of the things that I think are fascinating about hacking and security work. “While I was looking into the Cult of the Dead Cow, I found out that they had a member who was sitting in Congress. I didn’t know which one. But I knew that they had a member of Congress...And then I figured out which one it was. And the members of the group wouldn’t talk to me about who it was. They wouldn’t confirm that it was this person unless I promised that I wouldn’t write about it until after the November election. That’s because the member of Congress had decided to run for Senate. Beto O’Rourke is who it was...After more than a year of reporting, Menn persuaded O’Rourke to talk on the record. In an interview in late 2017, O’Rourke acknowledged that he was a member of the group, on the understanding that the information would not be made public until after his Senate race against Ted Cruz in November 2018.

The journalist defended his actions, saying that he couldn't have gotten confirmation from O'Rourke without pledging to hold back what he knew until the election was over. He also sought to draw a distinction between his "day job" as a reporter, and his side project:

To be clear, I offered @BetoORourke an embargo because it was for a book I was on leave to write, not for my day job, and because no one else who knew would confirm the facts before the election.

We should all respect and understand the need to pin down sources and confirmation before publishing a potentially-damaging story about a prominent political figure, but Menn wrote in his own story that he had "more than a dozen" named sources for his book. Are we to believe that there was no way on earth he could have gotten this story without this quid pro quo? It's possible, but many will have their doubts. If the subject of the story had been a Republican, would Reuters have decided that willfully withholding major information about a candidate's past was an acceptable journalistic decision -- or would they have pulled out all the stops to get pertinent facts to voters? I don't have to tell you how most media-suspicious conservatives would answer that question.

Then there are the ethical questions surrounding journalistic fact-gathering for a book project. If reporters learn valuable and newsworthy information during the course of a political campaign, is it a fair or responsible course of action to hold back the juiciest bits to boost future book sales, rather than reporting the news as expeditiously as possible? On one hand, being granted the sort of access one needs to write a deeply-reported insider account sometimes requires the establishment of embargoes and boundaries while a political campaign is still live. On the other hand, how can a journalist truly do his or her job properly while torn between conflicting mandates and timelines?  Meanwhile, a different Beto mystery has emerged.  Known for his eye-popping fundraising prowess, how did O'Rourke perform on the money front in his first 24 hours as a declared presidential candidate?  He won't say (see update):

.@mviser: You alluded to the financial hurdles of this--can you release any of your fundraising figures over the last 48 hours?
O’Rourke: I can’t right now.
Q: You could--
O'Rourke: You’re right, I could. Let me answer the question even better: I choose not to. pic.twitter.com/PMuYF1qyFu

Allahpundit wonders if Team Beto doesn't quite know how to spin an underwhelming initial haul, so they're refusing to admit that they fell short in the expectations game:

Beto’s not just competing against himself in fundraising in terms of matching the enthusiasm from last year, he’s competing against the rest of the field, of course. The pacesetter this year is Bernie Sanders, who raised a mind-boggling $5.9 million on his first day in the race. To that point Kamala Harris had led the field with $1.5 million in her first 24 hours. Sanders quadrupled her, serving notice to the other candidates that his base from 2016 was still intact and raring to go. Nothing else Bernie could have said or done in a day would have validated the sense that he’s the populist choice on the left as much as that fundraising number did. His supporters wanted to send a message by kicking in. You would think the same would be true of O’Rourke’s supporters, particularly given all the hype about his fundraising totals in 2018. If they wanted to show Bernie and the rest that their guy’s for real, a day-one bonanza was the way to do it. Did they provide one?...So far, total radio silence from him and his team.

AP also allows for the possibility that O'Rourke actually did pull in impressive numbers, after all, but he's holding onto that card for future strategic deployment. But virtually all of the rational incentives suggest that making a fundraising splash as soon as humanly possible -- to build momentum, put a scare into opponents, signal that he'll have lasting power, etc -- is the better play. Beto isn't making that play. Draw your own conclusions. Perhaps we'll get an announcement before the next required FEC disclosure, perhaps not.  You'd think a decent figure would be a handy distraction from this pitiful apology tour he's felt compelled to embark upon, including (somewhat puzzlingly) over fiction he wrote as a teenager.  I don't really think that should really be much of an issue at all, but this is an intriguing question from the, um, sitting Republican Governor of Texas:

How did the Cruz opposition research team miss this:
Beto Wrote A Murder Fantasy Piece Where The Narrator Runs Over Children With A Car https://t.co/LaC3kWqIGo

I'll leave you with Jimmy Fallon spoofing the candidate's announcement video.  It's funny because it captures the essence of Betoism:

UPDATE - The number is out, and it's...yuge, even edging Bernie's enormous haul.