Analysis: Trump Is Not Responsible For the Actions of a Mentally-Disturbed Supporter 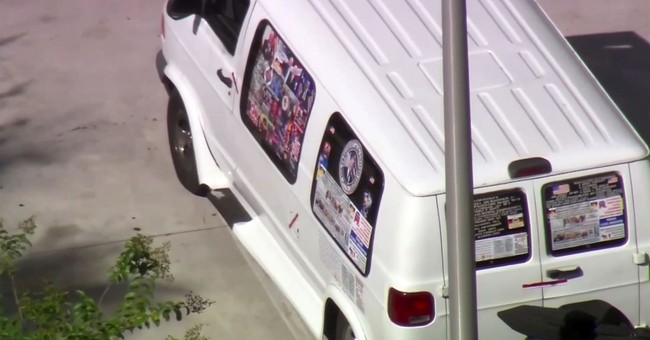 The biggest story of the day is the arrest of a Florida man, in connection with the series of mail bombs sent to prominent critics of President Trump.  In addition to reportedly having a criminal record for minor offenses and threats, the suspect appears to be a mentally unstable and cartoonishly-fanatical Trump supporter.  This is unsurprising information.  As I wrote yesterday, based on the identities of the bomb targets, Occam's Razor suggested that these acts of terrorism were politically-motivated.  It now seems likelier than ever that they were.  Allow me to make a handful of non-mutually-exclusive observations:

(1) Our country would be better off if our public officials and other prominent political figures debated issues with more substance, greater civility, and less hysteria.  This very much applies to the president, who likes to claim -- among other things -- that his opponents "favor" or "love" ruthless gangs who murder Americans.  It also very much applies to Democrats, who frequently frame Republican proposals as world-ending, or tantamount to mass killings.

(2) Overheated partisan rhetoric that falls well short of direct incitement to violence can be grotesque and counter-productive, but it should not be blamed for the actions of disturbed people.  It's possible, if not likely, that this bomber heard Trump's words and decided to take it upon himself to punish or eliminate Trump's opponents.  If so, that's a reflection on the bomber's evilness or mental illness, not Trump.  Similarly, it's quite likely that the Congressional baseball shooter heard the words of numerous high-profile leftists and decided he needed to save the country by assassinating Republicans.  That was a reflection on the shooter's evilness or mental illness, not the leftists he followed or favored.

(3) Demands that politicians and commentators calibrate their language in order to prevent depraved and insane people from engaging in depraved and insane conduct is more likely to harm free speech, or be exploited to disqualify legitimate political dissent as "dangerous," than it is to achieve that ostensible goal.  Crazy people find reasons and imagine "cues" to do crazy things; the argument that non-incitement speech might push someone over the edge strikes me as slippery and specious.  Couldn't something as simple as politician X alleging that politician Y is "hurting America" have this effect?  The threshold for 'triggering' harmful impulses in the mind of a deranged person is unknowable, inconsistent and subjective. We therefore cannot shape our rules for discourse based upon that standard -- even if we agree that our broader discourse needs serious rehabilitation.

Republicans are doing so well in early voting, and at the polls, and now this “Bomb” stuff happens and the momentum greatly slows - news not talking politics. Very unfortunate, what is going on. Republicans, go out and vote!

Publicly lamenting that the arrival of pipe bombs at the homes and offices of your political opponents may slow your own party's momentum is a colossally terrible take.  And it's not the news media's fault that it's devoting major coverage to this issue (the press frequently deserves plenty of criticism, but not for paying close attention to this story).  Trump would be far better off expressing further solidarity with the targets of the explosive devices, and unleashing his famous fury against his apparent supporter who is allegedly responsible for this spate of terror.  "If you think harming my opponents is somehow 'helping' me, you're dead wrong.  You're dead to me.  You're an animal who's hurting America -- and I always put America first."  If Trump's overarching concern is putting the GOP in the best possible position ahead of the midterms, he should wield his megaphone to condemn these acts so vociferously and relentlessly that nobody -- from hostile journalists, to any members of MAGA Nation with a few screws loose -- could misinterpret his meaning.  Prosecute this bomber to the fullest extent of the law, and pivot back to good news.  For instance:

U.S. GDP grew at a 3.5 percent annual rate in the third quarter, putting the economy on track for its best year since before the recession.https://t.co/DRWNtExOht

GDP growth beat expectations in the third quarter, keeping the US economy on pace to exceed three precent annual growth for the first time in 13 years.  There's every reason in the world for the president to share these developments far and wide.  But first, he must lead.