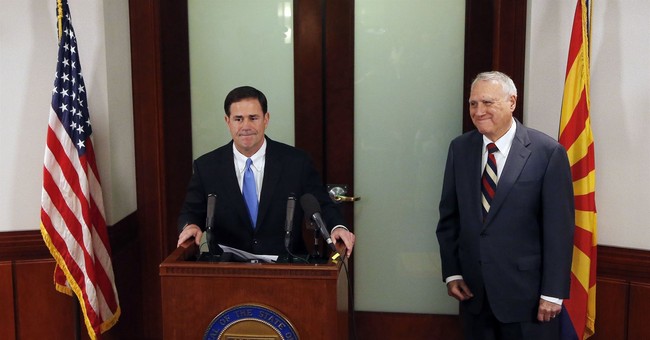 As Katie reported yesterday, Arizona Governor Doug Ducey -- who is up for re-election this fall -- has selected longtime US Senator Jon Kyl to replace John McCain in Congress' upper chamber.  It's a good pick, for several reasons.  First, Ducey has tapped an experienced and well-regarded legislator who will re-enter the Senate without skipping a beat.  Kyl maintains strong relationships with many current Senators, which is why he is currently serving as Brett Kavanaugh's liaison (or "sherpa") on Capitol Hill.  Kyl's deep institutional knowledge of Senate rules and procedure guarantee that he'll require almost zero hand-holding to get him up to speed.  He'll be able to do his job, and do it ably, from day one.  Second, Kyl is a conservative.  Few political figures engender as much admiration and broad support from across the center-right spectrum as does Sen. Kyl.  As one telling data point, here is the reaction of the Club for Growth, a group of fiscal hawks who tend to support candidates from the GOP's conservative flank:

Club for Growth sounds rather pleased by the Kyl pick. #Arizona #McCain pic.twitter.com/gGVqMLywrQ

A 92 percent lifetime CFG score is pretty darned conservative.  Third, Kyl is esteemed by the McCain family, thus eliminating any chance of an awkward or ugly battle between the late Senator's loved ones and either the sitting governor or the newly-appointed office holder:

Jon Kyl is a dear friend of mine and John’s. It’s a great tribute to John that he is prepared to go back into public service to help the state of Arizona.

Fourth, rather than selecting someone with little experience or scant qualifications (I broke down the 'family issue' last week), Ducey has elevated a man who served in the Senate for three terms, and spent years before that in the House of Representatives.  In other words, he's won the imprimatur of voters on numerous occasions over the course of an illustrious career.  That's not necessarily a requirement for a Senator-designee under these circumstances, but it's certainly an asset in this case.  Fifth, Kyl is 76 years old and has already departed the Senate on his own accord.  This is a caretaker role, not a springboard for higher office.  Politically, this is a savvy play by Ducey, who has picked someone with unimpeachable credentials, but who does not threaten any ambitions of up-and-comers in the Arizona GOP.  He will hold the place, and hold it well, but he will not seek election in 2020:

Putting his thumb on the electoral scales prior to learning his own re-election fate would potentially have been a risky move for the governor, who is understandably loath to alienate or rankle any elements of his own base at the moment.  Kyl, therefore, was an elegant and unobjectionable choice.  This, however, is intriguing:

Some tea leaf reading: Perhaps Kyl said he's only going to serve for one year as an insurance policy for if McSally loses in November.

She'd then be the favorite for another vacancy, and would start out as the fave in the primary. https://t.co/eNR8TpuLBW

Not only has Kyl averred that he won't run in 2020, he's also only committing to holding the seat through at least the end of this year.  So it's entirely possible that he'll spend a few months on the job, see how the midterms play out, then re-enter retirement if that course of action is deemed beneficial.  If Martha McSally wins this fall, that would be one story.  But if she loses, it's conceivable that Kyl would bow out in 2019, Ducey (if re-elected) would replace him with McSally (or another 'rising star'), giving her a clear leg up in advance of the 2020 special election to more permanently replace McCain.  I'll leave you with full video of Monday's press conference, as well as the NRSC's first television ad in the 2018 Arizona Senate race: