The Home Stretch: Five Big Numbers to Know From The Week in Politics -- August 17, 2018 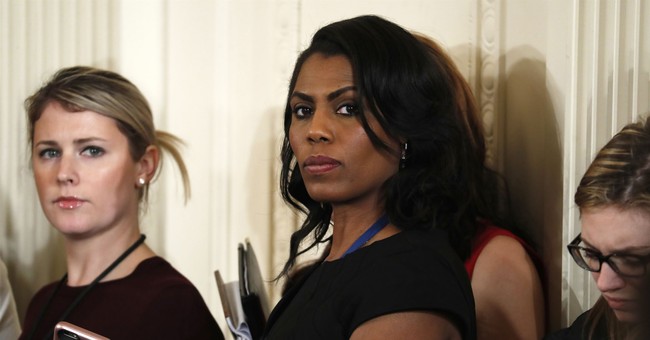 The weekend's on tap.  In spite of the adjoining photograph, we've already had our say on Omarosa.  Same with John Brennan (here's one more take, for your consideration).  Now, off we go...

[40,000] - The approximate number of employees at one firm who've now received bonuses, thanks to the GOP tax reform law.  Every Congressional Democrat opposed the bill -- with party leaders sneering at the "crumbs" from which workers are benefiting and rolling their eyes at exceptionally robust employment figures.  Some politicians may not be impressed by any of this, but I'd bet most of these folks are:

First on the agenda? Rewarding their nearly 40,000 employees in shipyards across the country. “We decided our employees would benefit most from an immediate cash bonus,” said Ermatinger. “Every single employee received $500. That’s a lot of money. We got hugely positive feedback from our employees...Huntington Ingalls also made a significant incremental contribution to their pension fund—adding $200 million—as a way of providing for their employees’ futures. While many pension funds across the nation face insolvency, Huntington Ingalls is well funded. Before tax reform, the shipbuilder had planned to increase capital spending by $1.5 billion by 2020. But now, they’ve upped that number by a whopping $300 million—to $1.8 billion. That means more jobs being created—and it will also help U.S. taxpayers, because savings will be passed along to Huntington Ingalls’ client: the U.S. Navy. Huntington Ingalls also plans to dramatically increase the amount of money they spend in their communities. In fact, because of tax reform, they’ve tripled their corporate giving.

In other economic news, the Wall Street Journal reports that major retailers are noticing increased consumer spending, signaling growing confidence:  "Retailers, from Walmart Inc. to Nordstrom Inc., are reporting strong quarterly sales, evidence that the robust U.S. economy is spurring people to shop and that some chains have found ways to compete in an increasingly online world. Buoyed by rising wages and employment as well as tax cuts, Americans are spending more on products as diverse as jeans, handbags and wall paint."  Walmart said its recent quarterly sales number hit is strongest mark in more than a decade.  Youth unemployment has also fell to a 52-year nationwide low, a statistic that holds real, positive implications for traditionally disadvantaged demographics: "Low unemployment among young people shows that in a tight labor market more opportunities are opening to groups that historically have struggled to find jobs." Liberals frequently claim that conservative policies 'leave people behind.' The current Trump-GOP economic surge is building a rising tide that is lifting all boats. And lowering a lot of families' energy bills, too:

Utility companies in 48 out of 50 states and DC have taken action to pass their federal tax savings on to more than 87 million customers—so far.  GEI found that “direct customer savings over a five-year period are significant—ranging from $101 million in Maine to more than $3.2 billion in California..."

[26] - As of yesterday, two more than two dozen Circuit Court judges have now been confirmed during the Trump era, far outpacing other recent presidents' clips on this important front.  We wrote about these developments earlier today, but as a follow-on, please enjoy this latest expression of impotent shouting from a top former spokesman for Hillary Clinton's failed 2016 campaign:

Trump is conducting a hostile takeover over the third branch of govetnment and Democrats in the Senate are responding by voting for the majority of Trump's nominees and filing FOIA requests.https://t.co/atp5V5vdK0

By "hostile takeover," perhaps Fallon means, "the legitimately-elected president, who won because of judges, filling judicial vacancies with the advice and consent of the Republican-held US Senate, in accordance with the designated constitutional process -- all aided by a confirmation precedent imposed by the now-opposition party."  Oh, and take a peek at these fresh SCOTUS numbers from the new Quinnipiac poll, which has been an especially rough series for Republicans in recent years.  These levels are all improved over last month's survey:

Q-poll: Support for Kavanaugh confirmation now at (+5), w/ indies at (+8) & women ~evenly split. *Many* still undecided in the survey. Also, if BK is at (44/39) overall, margins in states like WV, ND, IN, MO, TN, MT are certainly much stronger. #scotus pic.twitter.com/wPVUPuMTB2

[Two] - That's how many weeks it took after the Supreme Court handed down its 7-2 Masterpiece Cakeshop decision for Colorado's Grand Wizards of Right Thinking (known to some as the "Civil Rights Commission") to issue another authoritarian decree against the exact same small business. The High Court rebuked the commission for its heavy-handed approach to compelled speech, which was laden with anti-Christian animus.  Undeterred -- or even defiant and resolute to prove the Court's point -- these unaccountable, miniature autocrats have this time sided with an obvious troll, prompting yet another lawsuit.  The indispensable David French unloads:

According to a verified complaint filed today by my old colleagues at the Alliance Defending Freedom, on June 26, 2017 — the very day the Supreme Court granted Jack’s request to review his wedding-cake case — a lawyer named Autumn Scardina called Masterpiece Cakeshop and “asked Masterpiece Cakeshop to create a custom cake with ‘a blue exterior and a pink interior’ — a cake ‘design’ that, according to the lawyer,” reflected “the fact that [the lawyer] transitioned from male-to-female and that [the lawyer] had come out as transgender.” Lest anyone wonder whether this request was made in good faith, consider that this same person apparently made a number of requests to Masterpiece Cakeshop. In September 2017, a caller asked Phillips to design a birthday cake for Satan that would feature an image of Satan smoking marijuana. The name “Scardina” appeared on the caller identification. A few days earlier, a person had emailed Jack asking for a cake with a similar theme — except featuring “an upside-down cross, under the head of Lucifer.” This same emailer reminded Phillips that “religion is a protected class.”

On the very day that Phillips won his case at the Supreme Court, a person emailed with yet another deliberately offensive design request: [The request asked for a cake featuring Satan licking a sex toy, with an actual sex toy embedded in the cake]. And finally, two days later, a person identifying as “Autumn Marie” visited Phillips’s shop and requested a cake featuring a pentagram. According to ADF, “Phillips believes that person was Autumn Scardina.” Rather than recognizing Scardina’s conduct as nothing more than a bad-faith campaign of harassment, Aubrey Elenis, the director of the Colorado Civil Rights Division, found on June 28 “probable cause” to believe that Phillips violated Scardina’s civil rights when he refused Scardina’s bad-faith request to design a cake celebrating Scardina’s “transition.” This decision is as foolish as it is malicious.

Read the whole piece for details on why this harassment is even nastier and more frivolous than the last case.  The person or people making these demands are pathetic; the government officials abetting the bad-faith harassers, however, are a disgrace and should face consequences.  We've made a lot of progress in this country on LGBT rights, but trying to target and destroy dissenters is a fragrant exercise in poor-winnerism, and it's extremely unattractive.  Endorsed, with the caveat that these divisive theatrics are only embraced by a segment of hardcore activists:

It’s a testament to the warped priorities of the American #LGBT movement that it has nothing better to do than harass this poor manhttps://t.co/KepEk0guZy

[350-plus] - Will hundreds of newsrooms participating in a coordinated effort, jointly editorializing against President Trump's anti-"fake news" rhetoric, move the needle on public opinion?  And are Trump's words more of a threat than numerous, documented, literal physical assaults against journalists by hard Left agitators?  I unpacked those questions on a Fox News podcast this week:

Is the media the enemy of the people? @guypbenson discusses how @POTUS interacts with media organizations. #FOXNewsRundown https://t.co/UrjQiXec33

The US Senate passed a pro-free press resolution, which explicitly rejected Trump's "enemy of the people" formulation, by unanimous consent this week.

[Four] - It often takes a lot for a Democratic politician to get slapped with fact-checkers' harshest assessment, but Florida Senator Bill Nelson just pulled it off.  Nelson recently advanced an explosive claim about the Russian government having breached his state's elections systems, adding that multiple Republican Senators were backing him up on this point.  Skeptics in the press and from across the aisle demanded proof, which Nelson has failed to produce, sometimes claiming that it's "classified."  But in a video recording from a private event, Nelson appeared to backtrack on his assertion, explaining that his serious charge was more of an extrapolation.  The Washington Post's fact-checker reviews the record and awards Nelson 'Four Pinnochios:'

Nelson, who is up for reelection in November, took things further in public comments. He has said repeatedly and unequivocally since Aug. 7 that Russia has access to election systems in Florida and could eliminate individual voters’ records. This is far more alarming and detailed than the warning in Nelson and Rubio’s joint letter...Nelson’s claim is problematic in several ways. For starters, he keeps repeating it without evidence. He cites Burr and Warner as his sources, but neither senator has confirmed that Russia has access to Florida’s election infrastructure. Nelson said Aug. 7 that “classified” information supports his claim, but that’s hard to accept, considering the contradictory statements from DHS and the FBI...Representatives for Nelson did not respond to our questions. That’s also fishy... Not a single speck of evidence backs him up, and we have serious doubts whether the classified information he cited even exists...Making matters worse, Nelson misquoted his own letter from July 2 several times (it made no mention of an ongoing breach) and inaccurately said Burr, Rubio and Warner reaffirmed his assertion that Russia has access to Florida voters' records.

Ouch.  Not only has he been contradicted by the FBI and DHS, Floridian elections officials have denied Nelson's dramatic claim, including those in a number of heavily Democratic counties.  It looks like Nelson got way out over his skis on this one -- either out of disorientation, or in an over-zealous effort to play to his Russia-obsessed base.  He doubled down, then effectively went into hiding, only spilling the real story behind closed doors.  Will more voters (at least the ones who know who he is) conclude that Nelson is no longer up for this job?  By the way, while we're discussing GOP Senate pick-up opportunities, I give you this new poll:

Amy Klobuchar dings John Thune for South Dakota not having an NFL team.

Thune responds: "We have the same number of super bowl championships as you"