The Home Stretch: Five Big Numbers to Know From This Week in Politics 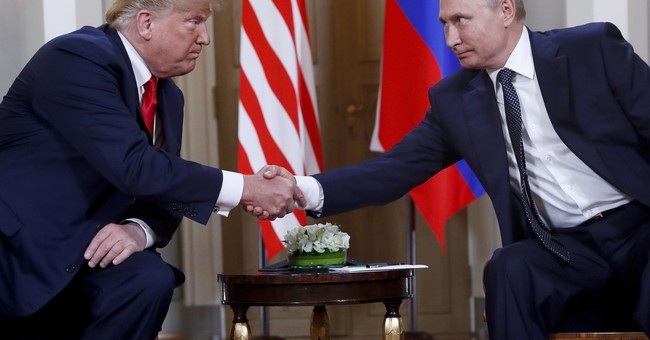 As you coast into your weekend, here are five big, take-away numbers from a busy week in politics:

[Zero -- aka "none"]. Amid the fallout from Monday's press conference in Helsinki, Finland, one permutation of that controversy centered around an offer Russian strongman Vladimir Putin reportedly extended to President Trump behind closed doors.  Putin suggested an interrogation swap, of sorts: Russia would consider giving US officials access to 12 freshly-indicted GRU operatives (the pre-summit announcement of said charges were green lit by Trump himself) targeted by Robert Mueller's team for electoral interference -- in exchange for the US letting Russian officials have a run at an anti-Putin businessman and a former US diplomat.  Most people saw this as a cynical ploy and an extremely dangerous precedent (especially involving the previous American ambassador to Moscow) but Trump appeared to describe the proposal in positive terms, and the White House initially declined to rule out taking it under consideration.  That waffling sparked a bipartisan outcry, including from Amb. McFaul himself:

As I discuss in detail in From Cold War to Hot Peace, Putin has been harassing me for a long time. That he now wants to arrest me, however, takes it to a new level. I expect my government to defend me and my colleagues, in public and private.

After a State Department spokesperson doused the idea in cold water, the Senate voted 98-0 in favor of a resolution condemning the notion, and the White House relented -- announcing that Trump disagreed with the floated idea.  Attempting to drive a nail into the coffin of this flare-up, Secretary of State Mike Pompeo gave a forceful, clearly-enunciated, one-word answer on the matter during an interview with Fox News' Shannon Bream on Thursday night. Unflinching clarity, for a change:

Pompeo shuts this idea down with one word. pic.twitter.com/LQj26ZPwmn

[70].  As we wrote about earlier, dozens of House Democrats publicly joined a new "Medicare for All" caucus, with 70 of them signing on for Thursday's coordinated reveal.  Reporters were told that was only the start:

Up to 70 members now pic.twitter.com/X63uoIKa1b

We've made the case against single-payer healthcare repeatedly, but it's pure wish-casting to hope that it isn't gaining serious traction within the Democratic mainstream -- or to believe that it's not at least superficially appealing as a concept to many voters.  It's a horrible idea, but this is a real trend:

Already more than a third of all House Democrats have signed on to join...In addition to this caucus, there already exists legislation in the House to establish a Medicare for All system, with 122 co-sponsors signed on. Over on the Senate side, Sen. Bernie Sanders’ Medicare for All bill has the sponsorship of at least a third of Senate Democrats.

[70, again]. With Senate Democrats demanding a lengthy review process for Brett Kavanaugh, who's hardly unvetted after 12 years on the DC Circuit bench, Senate Judiciary Committee Chairman Chuck Grassley is firing back. He says the confirmation process should wrap up within 70 days.  Here's Ed Morrissey explaining why Dems' delay tactics look weak, especially given their own history with Kavanaugh: "Senate Democrats have already had a bite at this particular apple. They threw the kitchen sink against Kavanaugh in 2006, including his work in the Bush administration, which at the time was his most recent work. All of that has been asked and answered, and Kavanaugh got confirmed in a 57-36 vote — after Harry Reid and Chuck Schumer stalled the nomination for three years. They’ve had a lot of time to go through Kavanaugh’s Bush-era record already."  Senate Majority Leader Mitch McConnell is also warning that if the opposition wants to drag this nomination out, he may institute his own politically-charged slow-walk:

Mitch McConnell has a warning for Democrats demanding copious documents on Supreme Court nominee Brett Kavanaugh: Be careful what you wish for. The Senate majority leader privately told senior Republicans on Wednesday that if Democrats keep pushing for access to upwards of a million pages in records from President Donald Trump’s high court pick, he’s prepared to let Kavanaugh’s confirmation vote slip until just before November’s midterm elections, according to multiple sources. Delaying the vote past September would serve a dual purpose for McConnell, keeping vulnerable red-state Democrats off the campaign trail while potentially forcing anti-Kavanaugh liberals to swallow a demoralizing defeat just ahead of the midterms. Senators said McConnell believes the Democratic base will be “deflated” if they raise hopes of defeating Kavanaugh only to lose just days before the election.

That timeframe would also keep the issue, which energizes conservatives and pressures red state Democrats, alive right up through the peak of election season.  Many liberal Democrats and presidential aspirants are eager to have that fight to please their base, but some of their vulnerable colleagues would love for this question to be resolved as quickly and painlessly as possible.  If these are the national numbers, think about the polling splits in Trump-won states:

Case in point, Joe Manchin might have a chance to waltz to re-election...if he confirms Kavanaugh:

[Eight]. With DC abuzz over Russia (average voters are far less focused on that drama), a number of Senators are trying to look forward to help prevent and deter future electoral meddling, rather than relitigating what happened two years ago.  US intelligence officials agree that the threat of ongoing Russian interference and destabilization measures remains active, which is precisely what prompted Republican Marco Rubio and Democrat Chris Van Hollen to co-introduce the 'DETER' Act.  As of Friday, that legislative effort picked up eight new co-sponsors, distributed equally across the partisan divide:

Our bipartisan #DETERAct with @ChrisVanHollen -which would automatically impose crippling sanctions on #Russia if #Putin interferes in our elections again- is gaining momentum. We added another 4 Democrat & 4 GOP cosponsors yesterday. More on the way. https://t.co/WcveiUCTPt

It was also favorably cited by Mitch McConnell, the most powerful arbiter of what measures come to the floor, and which items never see the light of day.  We're tracking this bill as a piece of proactive pushback against the Kremlin that doesn't entail finger-pointing about "collusion" or "witch hunts."

[54]. As we continue to track the status of a potential blue wave in the 2018 cycle (there have been good signs and a number of bad signs for Republicans along the way), fundraising totals are a key factor to consider.  On that front, Democrats are flexing their muscles (remember, everyone, sometimes money in politics is good, as long as it's left-wing money) and reminding political prognosticators about the resource and intensity gap that could fuel a blue-tinted election night:

To understand why House Democrats are still in strong position to retake the majority, simply follow the money. In the last quarter of fundraising, first-time Democratic candidates across the country raised stunning sums of money more closely associated with presidential campaigns than lower-profile House races.  All told, 54 House Republicans were outraised by upstart Democratic challengers between April and June. Twenty-two Democratic candidates brought in over $1 million in that period alone. At least 13 House Republicans have banked less money than their Democratic opponents, despite the myriad advantages of incumbency. If Democrats simply won the races where they have more cash on hand—32 GOP-held seats in total—they would end up holding a comfortable majority.

[Bonus Number: 133].  If you were wondering why the vast majority of House Democrats voted "present" this week on a simple resolution praising ICE -- which does indispensable immigration enforcement work -- look no further than this video of a Democratic House candidate in Arizona getting booed and heckled by her own base for publicly supporting the agency.  These are the scenes Nancy Pelosi et al are hoping to avoid down the home stretch of an election cycle. Democrats are more or less united in resistance, but deep fissures lurk beneath the surface on some key issues:

WATCH @Ann_Kirkpatrick get heckled, booed, and screamed at during last night's uncomfortable @RepresentMeAZ #AZ02 debate: "You should be ashamed of yourself!" https://t.co/PeszkEKv7c

Chick-fil-A stays the most Patriotic restaurant in the country. pic.twitter.com/xlOJVgNzc7