Analysis: Melania's Visit to Texas, and What Might Have Been 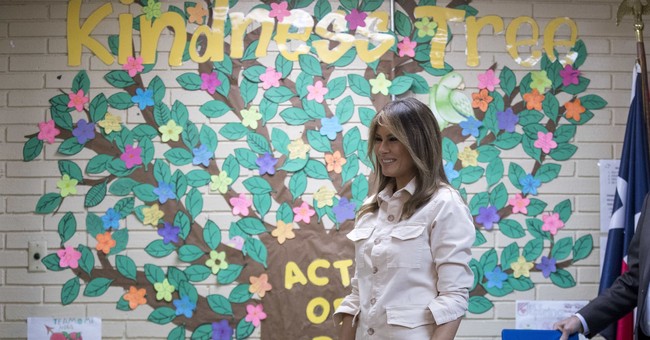 As I watched the First Lady's visit to a Texas detention center for illegal immigrant minors yesterday (was this a shot at her husband's administration, or a huge, silly, unforced error?), I was struck by two things: First, the questions she asked were excellent.  How long are children housed here?  What is their physical and mental state when they arrive?  How often can they call their families?  These are the sorts of questions many Americans have been wondering about for days. If you missed it, here's some of the video:

The second thought that stuck out to me was how the administration's policy and rollout could have been so much better -- or less catastrophically alienating and inept -- in basically every conceivable way.  I made this point, deliberately bluntly, on the air:

The full quote was, "bringing the First Lady down there is the first competent, non-stupid thing they’ve done in awhile on this issue.”  I think that's more or less accurate.  I then expanded on this larger point a bit on Twitter:

Watching Melania’s event at kids’ facility in TX & imagining how differently WH’s policy change could have been structured & messaged:

Imagine if the administration had anticipated the furious pushback against family separations in particular, laying the necessary groundwork for housing families together.  The zero tolerance policy could still have been enforced (there were conflicting reports over whether it was still in effect as of yesterday), just with the most emotionally-powerful argument against it off the table.   Remember, as I mentioned in my Thursday post, reverting to "catch and release" -- the Democrats' apparent preference -- is not popular:

Per Economist/YouGov: 46% of registered voters support Trump's new policy of family detention versus only 19% for catch-and-release.https://t.co/T3AHSnuFO0 pic.twitter.com/w67O3QUXMa

Next, think about how this could have been unveiled and defended if all the relevant players were on the same rhetorical page, instead of telling disparate and contradictory stories.  And picture the exact same scene in the video above playing out on live television weeks ago.  Fair or not, the perceived message being delivered by many of the administration's statements and actions is, "we don't care."  Melania is a well-liked, sympathetic figure who clearly cares.  Better late than never, but it certainly looked like she was helping to clean up a mess yesterday, as opposed to being deployed proactively and strategically.  The pushback I've gotten from some Trump supporters on social media on all of this goes something along the lines of, "the media and liberals would attack him no matter what."  Democrats' conduct in the last day or so vindicate that sentiment.  However, the other side's reaction does not justify bad or sloppy policy (against which a loud chorus of Congressional Republicans also raised objections), and Team Trump should not make their critics' job easier.

Parting thought: How might things look if the White House were focusing their domestic attention almost exclusively on the fabulous economy, rather than picking a fight over a fraught, half-baked immigration policy?

This chart should make GOPers up in 2018 frustrated. R's lead by 9 on economy, but POTUS leaning into immigration which is D+14. https://t.co/HT2WcqOrVh