Deep Thoughts: Can a President Actually Pardon Himself? 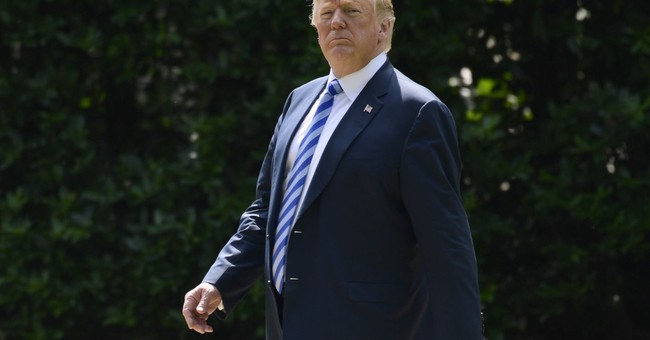 I'm admittedly a bit mystified that this question is being openly discussed by the president's team, but here we are.  The "issue" was thrust into the open over the weekend, when presidential lawyer Rudy Giuliani took the media's bait and speculated in real time -- you could almost see the thought bubble over his head -- over the question on live television.  Rather than saying, "this is a preposterous hypothetical that is unworthy of discussion because it won't happen -- next question," Rudy reasoned aloud that, yes, Trump could pardon himself if he wanted to.  And instead of shutting down the narrative, the president famously fueled it with a much-discussed tweet:

As has been stated by numerous legal scholars, I have the absolute right to PARDON myself, but why would I do that when I have done nothing wrong? In the meantime, the never ending Witch Hunt, led by 13 very Angry and Conflicted Democrats (& others) continues into the mid-terms!

Is he right?  Let's start with some analysis from Allahpundit, who describes the only context in which this debate would even be relevant:

Lay aside the insanity of a sitting president not just publicly contemplating pardoning himself but farting it out on Twitter over morning coffee. It’s bananas even according to the logic of Trump’s own legal team. The point of that memo his lawyers sent to Mueller and of Rudy Giuliani’s media tour yesterday was to make the case that a sitting president cannot be charged with a federal crime, period. Article II doesn’t allow it. The prosecutorial power resides in the presidency; if you want to charge him, you need to remove him from the presidency first. That’s the point Giuliani was trying to make with his bizarre hypothetical about Trump shooting James Comey. Rudy wasn’t saying that Trump could never be charged for that, only that he couldn’t be charged while still in office. Remove him from office and then you can charge him with whatever you want.

Rudy, you see, is also betting correctly that a Republican House would never impeach Trump, even if he blew Comey away on Fifth Avenue. But now we come to the puzzle. If Team Trump is right that he can’t be charged with a crime, why would POTUS ever need to pardon himself? The Constitution says he’s above the law — but he also might need a get-out-of-jail-free card? What? The self-pardon makes sense only in a scenario in which Trump is about to leave office. If he’s impeached and about to be removed by the Senate (won’t happen) or if he loses the election in 2020 and suddenly has to contend as a private citizen with findings of probable cause made by Mueller (more likely, although statutes of limitation may limit prosecution at that point) then a pardon would make sense.

Again, it makes no earthly sense for Team Trump to be feeding this story at all, but they're going with the 'kitchen sink' approach, it seems.  Former federal prosecutor Andrew McCarthy says Trump is correct; a president can, indeed, pardon himself under the law:

Yes, the Constitution empowers the president to pardon himself. Like any other power, the pardon power may be abused, and if Congress finds a presidential self-pardon is sufficiently abusive, it may impeach and remove the president. But that would not vitiate the pardon — it would be impossible to prosecute the president on whatever crimes had been pardoned...This is a sweeping presidential authority. The only exceptions to it are obvious from the Constitution’s Pardon Clause (article II, section 2), which limits pardons to “Offenses against the United States.” That is, the president may only pardon offenses that have already occurred — he cannot grant a prospective “get out of jail free” card for future crimes; and the president may not pardon state offenses, for they are outside his jurisdiction over federal law-enforcement...For what it’s worth, I believe the president and his legal team are making a strategic mistake in talking about how expansive the pardon power is, and about how the president’s control over the executive branch renders it constitutionally dubious that he can “obstruct justice,” in the sense of impeding investigators — subordinate executive officials who answer to the president...[people] are focused on these extravagant claims of power. Even if those claims are well-supported, they are unnecessary and can’t help but make people wary.

But wait, the most recent official legal opinion rendered on this question, in a 1974 DOJ memo, asserts the opposite -- the relevant principle, it states, is that "no one may be a judge in his own case."  But there's a loophole:

MEMO: President cannot pardon himself, but VP Pence could ??. DOJ confirms this 1974 memo is most recent published OLC opinion on the issue. pic.twitter.com/EwhyEeifco

How would that work in practice?

Yowza.  How much does Donald Trump trust Mike Pence?  The CBS correspondent reporting on this issue adds this note: "Key point: memo says President can go right back to work after pardon, doesn’t have to resign."  Wild stuff.  And we're all chattering about it because Trump's merry band of attorneys and PR warriors decided to walk us down this path, including the president himself.  I've done nothing wrong, but in case you were curious, I can totally pardon myself, and there's nothing anyone can do about it.  Messaging gold.  Ted Cruz, a constitutional expert, was pressed by reporters on this dispute, leading to what sounded like a comically long gap between question and eventual answer.  Cruz says he was ignoring the question as he walked the halls, but decided to answer a follow-up.  In any case, his verdict:

Whether the Department of Justice opinion is right is an open legal question, with scholars on both sides of the political spectrum disagreeing in good faith.

It's safe to say that this (far-fetched) scenario would end up in an epic legal battle.  That's...generally not something you'd expect a president to voluntarily dwell on, but things are strange these days.  And hey, if this is all perceived as mere static/counter-programming to a wildly thriving economy, maybe a lot of people will simply tune it out.  And in case you missed it yesterday, "wildly thriving" isn't much of an overstatement: