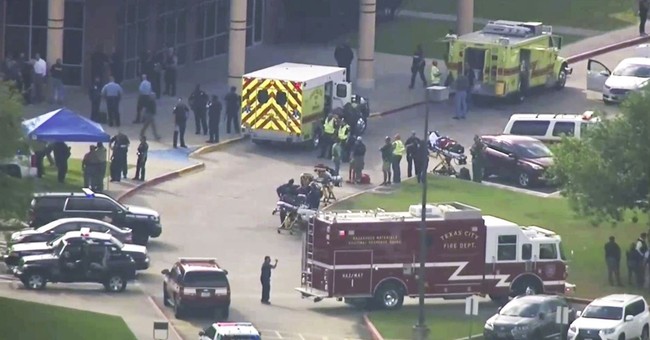 Virginia Democratic Senator Mark Warner told CNN's State of the Union that he doesn't think "there's a single piece of legislation" that could have prevented last week's horrible killing at a Texas high school, adding that a more holistic "series of actions" are needed.  His other nod to reality was acknowledging, after being prodded by host Jake Tapper, that Democrats failed to act on gun control when they controlled all three elected levers of power in Washington, DC during the Obama years. "Perhaps, in retrospect, more should have been done," he said, amid various evasions and excuses.

Warner -- who has moved to the left with the rest of his party on guns -- also mentioned background checks and "military-style assault weapons" in the interview, each of which is irrelevant to the latest incident.  The Texas killer was not legally permitted to own guns, and used more traditional (i.e., not an "assault rifle") firearms during a rampage that left ten people dead.  Nevertheless, these facts, which Warner at least partially recognizes, didn't stop one of his colleagues from Connecticut from unleashing his preferred brand of demagogic post-tragedy moral indignation:

Let’s call it like it is: the horrifying inaction of Congress, slaughter after slaughter, has become a green light to would-be shooters, who pervert silence into endorsement.

I’m left unclear as to what exactly Murphy is talking about. As the New York Times has confirmed, the shooter in Texas used a shotgun and a .38-caliber revolver — and nothing else besides. Moreover, because he was 17-years-old, he was ineligible to purchase a gun either privately or commercially, and thus had no contact with NICS background-check system that Murphy wants to expand. What, precisely, did “Congress” fail to do here? What perverted signal did it send? What “endorsement” did it provide? ... As for the implication that is embedded in Murphy’s tweet — namely, that declining to prohibit a given tool is in some way an endorsement of those who would abuse it — well, I can think of few more destructive ideas in a free country. Was Thurgood Marshall sending a “green light” to the KKK when he voted with the majority in Brandenburg v. Ohio? Are the many opponents of the Patriot Act offering an “endorsement” to the devotees of Jihad? Hardly. By suggesting that his opponents disagree with him because they are happy to “allow” massacres, rather than because they think that his proposals (such as they are) will be useless, Murphy is seriously damaging our debate over guns, and hurting our political culture.

Cooke's other major point is that by reheating his typical angry bromides, Murphy is either showing himself to be incapable of critical thinking that distinguishes between guns and acts of violence, based on the facts of each case, or willing to lie about the extent of his gun control intentions: "Had [the Texas] shooting been carried out with an AR-15, a weapon that Murphy has long wanted to ban, then his reaction would have at least have made internal logical sense. Likewise, if the shooter had bought his firearms privately and skipped the background check that might have thwarted him, Murphy’s finger-pointing would have been expected. But it wasn’t, and he didn’t. And yet Murphy still chastised Congress for not acting," Cooke writes.

"As far as I can see, there are only two reasonable ways to interpret this behavior: 1) That Senator Murphy is a grandstander who does not understand this issue well enough to do anything but shout “do something!” whenever he sees an abomination on the news; or 2) That Senator Murphy actually does want to ban shotguns and revolvers and everything else besides — and, by extension, that he wants to repeal the Second Amendment to the Constitution in order to get it done."  Which is it, Senator?  This is why so many gun rights supporters view the gun control movement's loudest voices as peddling in ignorance or dishonesty.  Take this tweet, for instance, which was shared thousands of times:

??No background checks.
??No registration.
??No license required.
??No assault weapon ban.
??No magazine capacity restriction.
??No law requiring stolen guns to be reported.

Retweet if you think we can do better

It is flagrantly wrong to state or imply that Texas doesn't require background checks on gun purchases; all gun sales from licensed gun dealers (accounting for the overwhelming majority of all sales) are subject to federal background checks.  Furthermore, bullet points four and five simply do not apply to the Texas shooting (which prompted the tweet) at all.  As we've noted, the killer did not wield a so-called assault weapon and did not exploit an oversized magazine.  He used a shotgun and a revolver.  As several people have pointed out, Texas had quite a few laws in place that ban the acts of this disturbed young man.  None of those legal measures prevented him from carrying out his project of destruction.  The strong desire to "do something" when teenagers are gunned down in school is completely understandable and human.  But demanding action that would violate law-abiding citizens' rights, or deflect blame onto the blameless, or fail to solve (or even mitigate) the actual problem is a waste of energy.

As we consider the difficult challenge of preventing these sorts of things, we should bear in mind that the "good guy with a gun" effect isn't a pro-gun fiction -- and is especially vital in defenseless 'gun free zones.'  We should also think about how the media covers school shootings, and how copycats are inspired when mass killers are turned into mini-celebrities.  This is a real, important factor:

You can read the @gladwell essay here. It's one of the most compelling things he's written: https://t.co/BkL1aTrLYg

Finally, I was struck by a heartbreaking comment from one of the Texas survivors who said she wasn't surprised that her school was attacked: "It's been happening everywhere," she said.  Given the ubiquitous media coverage of mass shootings in recent years, it's hard to blame her for holding this perception.  Look, it's important for policymakers, law enforcement officials, and school administrators to take this threat seriously.  It's also important for our national debate, and for the psyches of frightened students, for us to of course mourn heart-wrenching losses and search for viable solutions -- while also not exaggerating the extent of the problem.  Context and facts matter:

On Meet The Press I mentioned that school shooting rates have been plummeting since the 1990s, causing some outrage and shock on Twitter. Here’s a write up of the data. 4X as many kids were killed per year back then. https://t.co/4DrZ0wyFSt

Some will say that citing statistics like these is callous and unkind to those grieving very raw losses.  I disagree.  Reducing tragedies to mere numbers is heartless, yes, but so is allowing America's kids to wrongly believe that their lives are in far greater peril at school than they actually are.  Our discussions around these issues will sometimes get emotional.  That is natural.  But they don't need to be irrational.