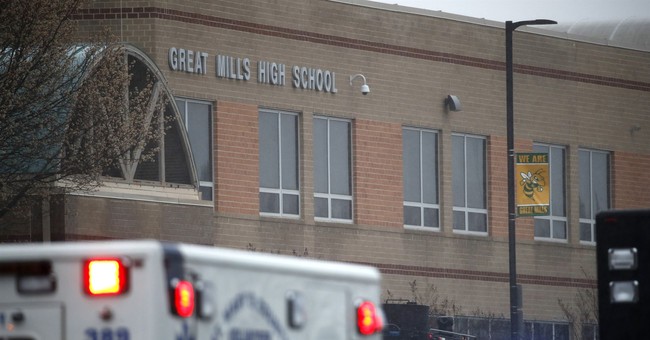 We're in a bad place when headlines about a school shooting that "only" wounds a few innocent people come as something of a relief.  Regardless of where you stand on gun rights and school safety policy, the frequency of these events at least feels more overwhelming -- even if the data suggests otherwise, and even if gun crime remains at or near a multi-decade ebb in our country.  It's not difficult to understand why many young people would view quasi-regular school or mass shooting as maddeningly unacceptable in a civil society.  The question, as ever, is what to do about it in a nation that values innocent life and fundamental constitutional rights.  That was the subject our post from earlier, in which I noted Gallup's finding that only a minority of Americans (albeit a large one, at 42 percent) were in favor of arming teachers and school officials.  I suggested that question phrasing may have impacted that result, but it's also possible that a number of respondents were questioning the "good guy with a gun" theory, which states that one of the only effective ways to thwart a gun-wielding attacker bent on destruction is to confront him with defensive firepower.

Some anti-gun activists sought to discredit the "good guy with a gun" riposte after Parkland by pointing out that at least one armed police officer -- and possibly four -- stood outside that besieged Florida high school while a massacre was underway inside.  But that dereliction of duty did not disprove the premise of the argument; it proved that a "good guy with a gun" is useless in the face of evil if he's unwilling to do what is necessary to protect victims.  Which brings us to this morning's school shooting in Maryland -- which appears to have been different from Parkland in a number of discrete respects: (1) This doesn't look like it was intended to be a spree killing, at least at first; officials are telling the media that the male assailant targeted a specific female victim.  (2) We don't yet know what type of gun was used by the would-be killer (as of this writing, there are no reported fatalities, aside from the attempted killer - update: tragically, another victim died), but based on some context clues, it seems fairly likely that he was not carrying a large semi-automatic rifle, but rather a handgun -- the type of weapon used in the vast majority of US gun crime.  We are awaiting further details on this front (update: confirmed). (3) The incident, which could have spiraled into something much more heartbreaking and deadly, was put to a stop by a school resource officer (i.e. a "good guy") with a gun.  This individual reportedly did what the job required and quite possibly saved lives -- via Peggy Fox of Greater DC's CBS News affiliate:

I'm not a great fan of the DC's partial framing of this as a possible "win for Trump," because no school shooting is a win for anyone.  But the apparent dynamics of how this violent incident was ended on the spot by an armed deputy reinforces one of the arguments advanced by gun rights activists and school security advocates throughout our post-Parkland national debate.  Additional details from NBC 4:

A student pulled out a gun and shot two other students at a high school in southeast Maryland Tuesday morning before the shooter was killed, the St. Mary’s County sheriff says. The student entered Great Mills High School in Great Mills at the beginning of the school day and shot a female student in a hallway, Sheriff Tim Cameron told News4. A male student also was hit by a bullet...The shooter exchanged fire with a school resource officer, who is a trained, armed deputy sheriff, Cameron said. The shooter was wounded; the officer was not...Cameron told News4 that his department prepares for emergencies. But despite the fast reponse of the school resource officer, or SRO, two students were still shot. "You train to respond to this and you hope that you never ever have to," he said. "This is the realization of your worst nightmare — that, in a school, that our children could be attacked. And so as quickly … as that SRO responded and engaged..."

Now, a separate thought: The identities of assailants in these horrible situations are plainly newsworthy, and I'm uncomfortable with the notion that the media shouldn't be allowed to report relevant facts.  The Bill of Rights should be taken seriously.  I do wonder, though, if more news directors and editors should carefully contemplate adopting editorial guidelines to deny virtually any and all notoriety to school shooters.  There's a raft of data demonstrating that the 'copycat' effect is real, and that troubled youths may see horrific events like this as increasingly normalized opportunities to leave a mark and be remembered.  What they deserve is relative anonymity and disgrace.  On this point, I'll leave you with Ben Shapiro's announcement of the Daily Wire's recently-formalized policy:

It has become increasingly clear in recent years that the value of public knowledge regarding specific names and photographs of mass shooters is significantly outweighed by the possibility of encouraging more mass shootings. Studies suggest that media coverage of mass shootings can have a significant impact on the psyches of potential mass shooters — that such potential mass shooters have a cognitive craving for attention, which they know they will receive for committing atrocities. As Professor Jennifer Johnston and Andrew Joy of Western New Mexico University found in a paper presented to the American Psychological Association’s annual convention in 2016, “media contagion” can help make mass shootings more common. “Unfortunately,” said Johnston, “we find that a cross-cutting trait among many profiles of mass shooters is desire for fame.” The rise of such a trait in mass shooters, she claimed, rose “in correspondence to the emergence of widespread 24-hours news coverage on cable news programs, and the rise of the internet during the same period.”

Johnston recommended a media pact to “no longer share, reproduce, or retweet the names, faces, detailed histories or long-winded statements of killers, we could see a dramatic reduction in mass shootings in one to two years.” While other studies do not make such a dramatic statistic prediction, they do support similar conclusions...We will still report the backgrounds of mass shooters, biographical details, the type of weapons used in such shootings, how such weapons were obtained, and other details that could make a difference in the public debate with regard to policymaking. But we will not contribute to the unintentional glorification of shooters themselves by giving their names and faces airtime.

The government should not pressure or require the free press to embrace similar self-censorship, but leaders in the field of journalism ought to think long and hard about what their industry may be able to do on a voluntary basis to fulfill their journalistic mission without fueling a problem.

UPDATE - This quote speaks for itself:

UPDATE II - This post has been edited to reflect the development that the shooter shot himself after the police officer engaged him, putting an end to the incident. The fact remains that a 'good guy with a gun' stopped the killer in his tracks.