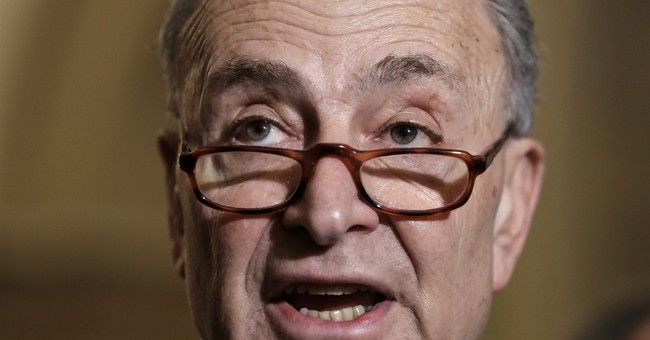 The DC flagged this one, and it's a doozy.  Schumer is opposing a Trump pick on explicitly racial grounds, yet is framing his stance as a retaliatory protest of Republican racial discrimination, or something.  And the grounds for his claim -- you'll be shocked to discover -- are utterly specious and spurious.  No Courtroom for White Men:

Senate Minority Leader Chuck Schumer attacked one of President Donald Trump’s judicial nominees on Wednesday because the nominee is not a racial minority. The Democrat from New York said on the Senate floor that he could not vote to approve Marvin Quattlebaum for a vacancy on the U.S. District Court for the District of South Carolina because he is a white man replacing two black Obama nominees. “The nomination of Marvin Quattlebaum speaks to the overall lack of diversity in President Trump’s selections for the federal judiciary,” Schumer complained. “Quattlebaum replaces not one, but two scuttled Obama nominees who were African American.”

I'm sure he'd eagerly support a qualified conservative minority nominee, right?  You're not fooling anyone, Senator.  Recall that Schumer filibustered Miguel Estrada seven times during the Bush years for purely ideological reasons; in fact, leaked internal memos exposed how Democrats were blocking Estrada explicitly because he was Latino.  Schumer's obstruction of that brown-skinned judge was part and parcel of the Democrats' shameful and unilateral pattern of escalating the judicial wars, leading to last year's long-overdue Republican revenge.  But now he's all about racial diversity, or whatever.  It's pathetic.  Lindsey Graham wasn't happy:

This was an absolutely shameful reason to vote against a very qualified nominee like Marvin Quattlebaum. This is political correctness run amok.  Voting against a highly qualified nominee because of the color of his skin does nothing to bring our country and nation together.  Frankly it is a massive step backward. I judge nominees on the content of their character, not the color of their skin.  Chuck Schumer should do the same.

Neither was Trey Gowdy, who put the lie to Schumer's preposterous racial grandstanding:

I hate to interrupt Senator Schumer with facts. But one nominee was withdrawn because of a significant bond issue, while the other became the Chief Justice of the South Carolina Supreme Court.https://t.co/Hoj9e1xWhs

Allahpundit runs through some of the details:

Obama’s first nominee for the seat, Alison Renee Lee, was opposed by both senators from her home state of South Carolina, one of them the only black Republican in the Senate. Why? Because she had lowered bail for a burglary suspect who then went out and killed someone. That’s the “serious bond” issue to which Gowdy’s referring. The next nominee for the seat was Donald Beatty, chief justice of the South Carolina Supreme Court. He was nominated in late February 2016, right around the time Mitch McConnell started aggressively slow-walking Obama judicial nominees on grounds that the outcome of the impending presidential election should decide who gets to make the appointment. Beatty got caught in the same snare as Merrick Garland.

So one of Obama's black nominees was defeated, in part, thanks to the substantive objections of a black Senator. The other languished under the same tactics that were most memorably employed against Merrick Garland -- a white man, for race obsessives.  By the way, Quattlebaum's nomination was advanced with 69 votes, meaning that the GOP didn't even have to use the Reid Rule to green light his confirmation, which was formalized yesterday afternoon.  Nice work all around, Chuck:

Confirmed, 69-28: Exec. Cal. #437, A. Marvin Quattlebaum, of SC, to be United States District Judge for the District of South Carolina.