'Disgraceful:' Trump's Latest Criticism of Sessions on FISA Probe is Ignorant and Embarrassing 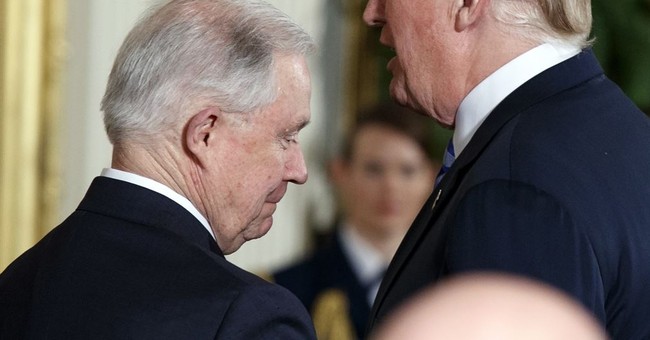 Cortney covered the president's tweet from this morning earlier, but I just wanted to add my two cents: Setting aside the unseemly spectacle of Trump routinely humiliating of his own Attorney General -- whom he clearly wants to serve as his personal political lapdog -- Sessions has been correct in each of the instances that have drawn his boss' ire.  His recusal on the Russia probe was by the book, as recommended by the department's ethics lawyers, and his plan to refer the issue of potential Obama-era FISA abuses to the nonpartisan Inspector General is also completely appropriate.  Here's Trump's latest tantrum:

The DOJ investigating itself is a fool's errand.  The Trump DOJ probing the Obama DOJ's actions would be instantly dismissed as partisan retribution by many, many people -- and evidence of any genuine wrongdoing would be needlessly tainted in the realm of public perception.  The whole point of having a nonpartisan watchdog to oversee these agencies is to allow for independence and credibility.  The Justice Department's IG was a Bush appointee before he was "an Obama guy" -- and his near-complete review of the FBI's Hillary probe was apparently thorough and damning enough to get Andrew McCabe pre-emptively tossed out of his position.  There's no reason to doubt the professionalism and dedication of Inspector General Horowitz.  Trey Gowdy, a straight shooter, agrees:

Gowdy says he has "complete confidence" in DOJ IG Horowitz amid attacks from Trump, noting Senate confirmed him w/o a single 'no' vote: "He has been fair, fact centric, and appropriately confidential with his work," says he should be given the "independence to complete his work”

If Trump wants a reckless, legal advice-ignoring Attorney General, he should fire Sessions.  The former Alabama Senator is right to defend himself against this dumb outburst.  Finally, I'll add: After being skeptical at first, I actually now agree that an independent probe into potential FISA overreach and abuses is in order.   If Mueller doesn't cover that ground in his report, the Inspector General should dig into it.  And based on those findings, prosecutorial actions could be undertaken, if appropriate.  And by the way, it seems like a good time to point out that some dedicated public servants are proving themselves capable of carrying out their duties impartially, even after being targeted by Trump's ugliest and most appalling attacks:

Recommended
Freedom Is Contagious: Here's Where You Can Now Shop Without a Mask
Spencer Brown

Trump’s terrible attitude toward Judge Curiel was ugly in and of itself. But it’s made even worse by the fact that, by all accounts, Curiel is as impartial as they come. https://t.co/PAY8T1slwk

Cancel Culture Victim Emmanuel Cafferty Feels 'Insignificant' After Unfairly Losing Job
Townhall
Antisemitic Prof. Marc Lamont Hill won't apologize for purposely leaving out the truth about Israel's rocket emoji tweets
Twitchy
Republicans Tell the Chamber of Commerce to Pound Sand
Redstate
The COVID-19 Test No One Is Talking About: Make Sure Your Children Have It Before They Are Vaccinated
PJ Media