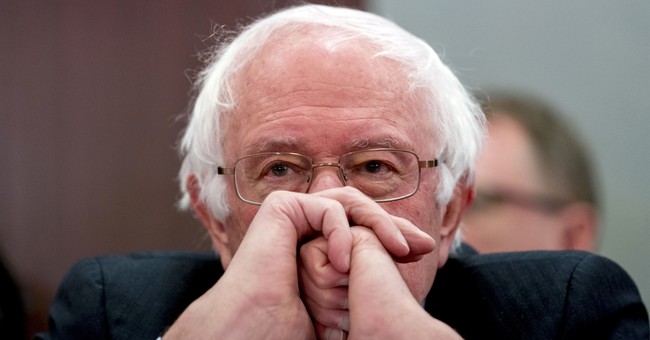 Sometimes political parties succeed in spite of themselves, and if Democrats end up having a big November, they'll do so despite internal strife, messaging incoherence and terrible arguments.  After shutting down the government over immigration, an unpopular gambit, they tried to pin the blame on President Trump and the Republicans. Door A was, "the GOP is responsible!"  Door B was, "you're g--damn right we ordered the code red!"  Democrats have been clumsily bouncing back and forth between these two options, and Bernie Sanders has confirmed what we already knew -- of course it was a Democratic shutdown, he admits, calling it "the right thing to do:"

Sen. Bernie Sanders says the shutdown was morally "the right thing to do" for Dreamers, calling continuing resolutions "very detrimental to the military and to many other agencies of government" https://t.co/gLNA9HCBpf pic.twitter.com/BsbogxYYIa

So much for that #TrumpShutdown hashtag and those placards Chuck Schumer had printed as messaging props for his speeches.  Senate Democrats used the filibuster to close the government over the ancillary issue of immigration, then retreated when they failed.  And speaking of immigration, an endangered red state Democrat is slapping down Nancy Pelosi's naked race-baiting in response to the White House's (rather generous) DREAM Act compromise offer:

U.S. Senator Joe Manchin, a moderate Democrat, said on Sunday he thought a new White House immigration plan was a good starting point, and he criticized House Democratic leader Nancy Pelosi for dismissing it as a way to “make America white again.” “We don’t need that type of rhetoric on either side, from Nancy, (Republican House Speaker) Paul Ryan or anybody else,” said Manchin, a West Virginian and a leader of a bipartisan Senate group working on immigration. Manchin’s comments highlighted differences among Democrats ahead of a Feb. 8 deadline for the U.S. Congress to pass another spending bill and try to reach an immigration agreement that would also protect up to 1.8 million illegal immigrants brought to the United States as children, a group known as “Dreamers,” from deportation.

Good thing Paul Ryan didn't say anything like what Pelosi said, right, Joe?  Think about the context of her ugly smear for a moment: Trump had just suggested formalizing legal status and opening a path to citizenship to nearly two million DACA-eligible illegal immigrants, in addition to stepping up border security and a shifting from chain migration to a more merit-based legal immigration system, like the ones used by the UK and Canada.  This was little different than white supremacy, according to the leading Democrat in the House of Representatives.  That's insane, but it's typical of the Left's 'End of Discussion' approach to "debate," if that word even applies.  Indeed, a Senate Democrat bomb thrower informed his Twitter followers that the term "chain migration" is a racist fiction unto itself, or something:

Reminder: "chain migration" is a made up term by the hardline anti-immigration crowd. Its purpose is to dehumanize immigrants. If you're using that word, you're declaring a side.

They want to "win" by controlling language and obfuscating real issues by lobbing nasty charges at anyone who disagrees.  We'll see if Joe Manchin feels compelled to chide yet another fellow Democrat over deep, racial tension-stirring ignorance.  Here's the reality:

Chain migration is a term used by demographers since the 1960s to refer to the social process by which migrants from a particular town follow others from that town to a particular destination city or neighborhood.https://t.co/VUsJqEZaCh https://t.co/U04DVCPMU8

Popular vote went to Hillary, and Democratic Senators represent 40 million more Americans than a Republican Senators do. Give democracy a chance rather than ignoring the popular majority.

You'd think a US Senator might understand the function, role and design of...the US Senate, but that may be asking a lot these days.  And who wants to be the one to tell him that Republicans won the nationwide House 'popular vote' in 2016?