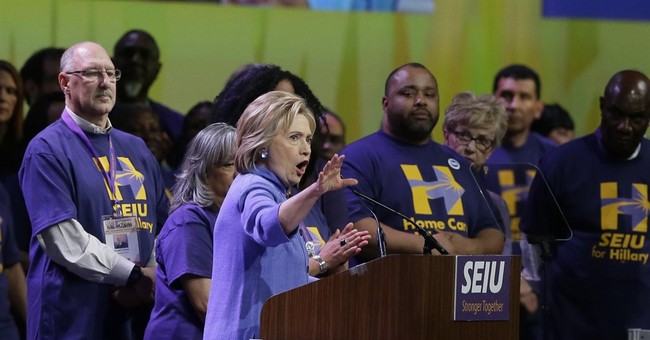 The #MeToo phenomenon on sexual harassment continues to expand, and it's not just right-wingers like Roy Moore getting caught in the crossfire.  Not by a long shot.  As we outlined earlier, liberal Minnesota Senator Al Franken has had a second groping complaint lodged against him, and the New York Times has suspended a (notoriously liberal) reporter amid fresh allegations of sexual misconduct.  A few details on that story:

Thrush says he has stopped drinking and has "resumed counseling."  Meanwhile, a major element of the left-wing political machine is being roiled with accusations of misconduct among its leadership.  SEIU, a massive contributor to the Democratic party, is under fire -- as Politico reports:

The Service Employees International Union faced questions last week over how a former staffer fired for inappropriate workplace conduct at a Boston local found work at two other SEIU locals in California. The labor website Payday Report reported last week that Pedro Malave, a former assistant director at 32BJ SEIU District 615, was fired in 2014 after allegations of sexual assault. Malave then found work at two California locals, SEIU-UHW and SEIU-USWW. The locals dismissed Malave after Payday Report inquired about the allegations last week...

Malave is the fifth SEIU official in recent weeks to leave the union following allegations of misconduct, after the October resignations of Executive Vice President Scott Courtney and Chicago Fight for 15 leader Caleb Jennings; the resignation earlier this month of Fight for 15 Organizing Director Kendall Fells; and the firing earlier this month of Mark Raleigh, who ran Fight for 15’s Detroit chapter. To review its sexual harassment policies, SEIU assembled an external panel that includes Cecilia Muñoz, former director of the White House domestic policy council under Barack Obama. "SEIU is deeply committed at every level of our union to ensuring that our workplace environment reflects our values, and that all staff is respected, their contributions are valued and their voices are heard,” spokesperson Sahar Wali said in a written statement.

Meanwhile, as Democrats continue to conveniently wash their hands of Bill Clinton -- after years of apologies and indignant defenses -- some of the female lawmakers who've suddenly come around to the position that Clinton should have resigned from office in the late 1990's are getting called out for their very recent hypocrisy on the subject.  The numerous allegations against Clinton aren't new.  They've been heavily documented.  But now that he's politically expendable, they're finally willing to toss him to the wolves, even as their views on him were quite different in the very recent past:

Last year she wrote about how “honored” she was that Bill had campaigned for her. https://t.co/ohBZJ7gUG0

Oh, and here's another major Hollywood figure in the crosshairs of serious sexual allegations:

The point of all of this is not to cast aspersions on the entire Left, or to avert our eyes from the real problems (and pathetic excuse-making and moral relativism) on the Right.  But for years, liberals have pretended that they are are "pro-women," and conservatives are not.  And as media is getting tons of mileage out of the Roy Moore story, most of which is richly deserved, it's important to repeatedly underscore how sexual harassment is not relegated to one end of the ideological spectrum. I'll leave you with this, from Ross Douthat:

Opinion: Conservatives were right about Bill Clinton; once he failed to resign he really deserved to be impeached https://t.co/AKrHAEpGO4

UPDATE - Oh man, this is rough news for CBS and PBS. The hits keep on comin':

WaPo's lede: "Eight women have told The Washington Post that longtime television host Charlie Rose made unwanted sexual advances toward them, including lewd phone calls, walking around naked in their presence, or groping their breasts, buttocks or genital areas. The women were employees or aspired to work for Rose at the 'Charlie Rose' show from the late 1990s to as recently as 2011. They ranged in age from 21 to 37 at the time of the alleged encounters. Rose, 75, whose show airs on PBS, also co-hosts 'CBS This Morning' and is a contributing correspondent for '60 Minutes.'"