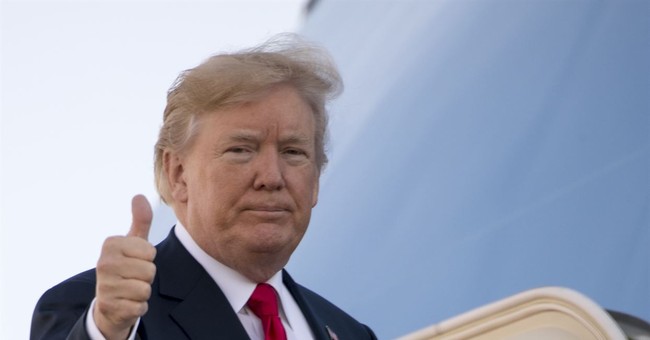 The US economy added 261,000 jobs in October, rebounding from a hurricane-drenched September.  Other indicators were mixed, although the primary 'U3' unemployment rate has tumbled to 4.1 percent -- the lowest level in 17 years, as various Trump administration officials are eagerly pointing out today.  Despite some lingering concerns about the strength of employment and economic growth, the overall picture continues to improve.  Here is the Associated Press write-up:

U.S. employers added a solid 261,000 jobs in October in a bounce-back from the hurricanes that slammed the Southeast in September. The unemployment rate declined to 4.1 percent, the lowest in nearly 17 years, from 4.2 percent in September, the Labor Department said Friday. But the drop in the rate occurred mostly because many people stopped looking for work and so were no longer counted as unemployed....October’s burst of hiring largely reflects a rebound from the hurricanes that temporarily depressed job gains in September. But it also shows that for all their fury, the storms didn’t knock the economy or the job market off course. Over the past three months, job growth has averaged 162,000, similar to the pace of hiring before the hurricanes.

The government also revised up its estimate of the job total for the previous two months. In August, employers added 208,000, up from 169,000. They added just 18,000 in September as thousands of businesses were forced to close. But that figure was revised higher from a previous estimate that showed a loss of 33,000. With September’s jobs figure back in the positive column, the economy has now added jobs for 85 straight months, a record streak...Restaurants and bars regained 89,000 jobs last month. Manufacturers added 24,000 jobs. A category that includes mostly higher-paying professional jobs, such as accountants and engineers, added 50,000. Retailers shed 8,300...Americans are also sounding more optimistic about the economic outlook, which could prompt more people to open their wallets in the coming months. Consumer confidence reached its highest level in nearly 17 years in October, according to the Conference Board.

The AP story notes that the broader 'U6' number slid slightly in October, reflecting a rise among those who've stopped actively seeking work.  A look at both trends, via AEI:

AEI chart on U3 and U6 unemployment trends: pic.twitter.com/p5wfFNOsh8

And as Fox Business Network's Trish Regan points out, in spite of the solid overall numbers, one indicator remains stubbornly shaky:

Nonetheless, wages failed to break out in October, rising 2.4% from a year earlier, a slowdown from the prior month. “With the swings from the hurricanes now largely behind us, the longer-term challenge of wage growth returns to the foreground,” said Jed Kolko, chief economist at job site Indeed.  While job creation was broadly strong, the report contained a few shadows, like a softening in wages. Average hourly earnings for private-sector workers decreased by 1 cent, or 0.04%, last month to $26.53 an hour. That fell short of economists’ expectations for a 0.2% monthly gain.

The economy isn't exactly roaring, but it's in a pretty good place -- hence the low unemployment rate and robust consumer confidence, each of which are at their strongest levels in nearly two decades. Republicans will argue that tax reform will help hypercharge lagging economic elements, and that middle class Americans facing relatively stagnant wages would benefit from an average tax cut of nearly $1,200.  The White House would also point out that back-to-back quarters of GDP growth in the three percent-plus range, even with weather-related setbacks, is a clear sign of strength.  I'll leave Trump supporters with this sobering note, illustrating how the upbeat economic outlook described in this post is not translating into an improvement in the president's job approval rating -- yet, at least.  Yeesh:

That's actually an improvement over recent all-time lows, which came before the Mueller indictments.  Perhaps one factor at play is a rally-around-the-flag effect, following the terrorist attack in New York City.