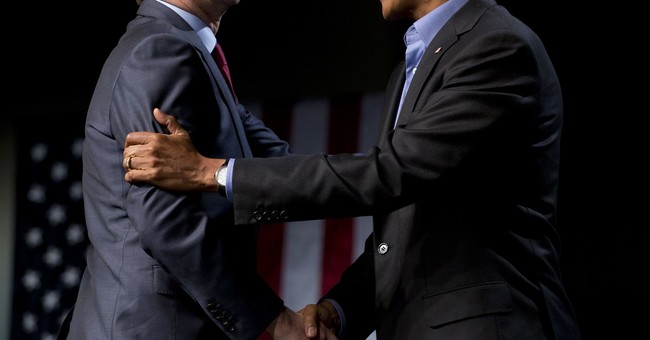 If (most) polls are to be believed, Democrat Ralph Northam is on the precipice of becoming Virginia's next governor.  But he and his supporters are not exactly acting like people who are confident that victory is at hand.  Over recent weeks, Republican Ed Gillespie's campaign has bombarded the opposition with ads highlighting Northam's tie-breaking vote to block a ban on so-called "sanctuary cities" in the state.  Here's one of them:

It's true: On a bill to prevent sanctuary cities in Virginia, the state senate tied 20-20, and Lt. Governor Northam intervened to vote it down. A Republican later switched his vote, allowing the measure to pass, only to be vetoed by Clintonite and strong Northam supporter, Gov. Terry McAuliffe.  McAuliffe unilaterally restored voting rights to convicted felons, and teamed up with Northam to beat back a measure barring the establishment of sanctuary cities for illegal immigrants -- yet Democrats act shocked and outraged that Republicans have pounded away at a 'soft on crime' election narrative.  In any case, Northam is suddenly singing a different tune on the latter issue:

Democratic gubernatorial nominee Ralph Northam said Wednesday that he would sign a bill to ban so-called sanctuary cities if a Virginia locality tries to become one in the future. Republican nominee Ed Gillespie has pushed the issue of sanctuary cities to the forefront of the governor’s race. The term is loosely defined but generally understood as a locality that will not cooperate with federal immigration authorities. No Virginia city or county has tried to adopt policies to impede such cooperation. Northam, Virginia’s sitting lieutenant governor, has insisted he opposes sanctuary cities while also accusing Gillespie of fabricating the issue for political advantage...“If that bill comes to by desk ... I sure will. I’ve always been opposed to sanctuary cities. He knows that,” Northam said of Gillespie...

He's "always been opposed" to sanctuary cities, you see -- unless you count that time he broke a Virginia Senate tie to defeat a bill that...banned sanctuary cities.  Got it.  National Review's Jim Geraghty ridicules this spin, noting that the legislation Northam voted to kill was extremely simple and straightforward: "For reference, the legislation was one sentence long: 'No locality shall adopt any ordinance, procedure, or policy that restricts the enforcement of federal immigration laws.' Not exactly difficult to interpret!"  Not at all.  Geraghty presses this line of criticism further, asking something of a rhetorical question: "Why would you oppose preventing a bad idea from becoming law? By any chance did it have anything to do with the fact that he was fighting in a Democratic primary, and was attempting to court the Left, including endorsing the state providing driver’s licenses for illegal immigrants?"  Why, it's almost as if Northam is a panderer.  It's been quite a closing week for the Democrat's campaign -- from barely denouncing a grotesque attack ad run, then pulled, by a group with which Northam's campaign turned out to have coordinated, to holding a rally at which Republicans were denounced as "evil" by top endorser:

Ralph Northam claims he did not approve the racist murder truck ad, but his campaign reported it as an in-kind contribution. #VAGov pic.twitter.com/90cAqefNhP

Is this the sort of behavior one might expect from people who are anticipating victory?  Odds are that Northam remains the favorite to win on Tuesday, but closing with "our opponents are 'evil' racists who want to run down brown children with pickup trucks" smacks of desperation.  Perhaps Virginia Democrats know that the race is uncomfortably close, and feel the need to strike fear in the hearts of racial minorities and other elements of the base in order to juice turnout numbers.  Matt flagged this yesterday, but this is how Gillespie is closing out the race: