Report: Weinstein Rages Against 'Conspiracies' Against Him at Rehab 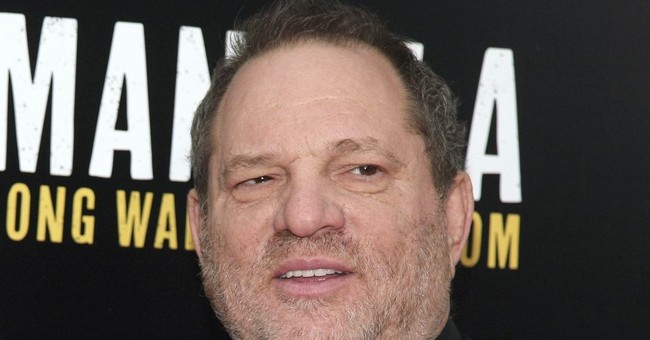 Based on everything America has come to know about Harvey Weinstein's ego, arrogance, manipulation, and pathological abusiveness, should a single human being be surprised that his "rehab" is reportedly off to a very Harveyesque start?  Step one on any path to healing and redemption is genuine acknowledgement of wrongdoing and authentic expressions of remorse.  So how's that coming along?  About as well as you might expect -- allegedly:

Harvey Weinstein is already being belligerent at sex addiction rehab — barking into his banned mobile phone and remaining in denial about his alleged sex attacks, insisting each and every one was consensual, Page Six has exclusively learned. The movie mogul, who volunteered to go to rehab after a wave of allegations of sexual harassment and rape against him from women in Hollywood, isn’t exactly in his element in therapy, falling asleep in sessions or talking on his phone, a source tells Page Six...The source told us, “In one group therapy session, Harvey arrived 15 minutes late. Then, when it was his turn to speak, he launched into a speech about how this is all a conspiracy against him.” The source added that as others at the clinic shared their personal stories, “Harvey fell asleep in his chair. He was only woken up by the ringing of his smuggled mobile phone [which is banned at the facility] . . . Harvey jolted awake, jumped up, immediately took the call and then ran out of the room.”

I mean, we already knew he wasn't truly remorseful for his actions -- as evidenced by his ludicrous statement vowing to channel is anger toward the NRA, and his behind-the-scenes threats against news organizations in an effort to crush these negative revelations before they were published, and his battle to k.  But this really confirms it.  He's in a haze of vengeful denial.  Another source says he's not behaving quite that poorly in therapy, and that Weinstein still insists he didn't do anything that pushed the bounds of consent. He's been accused of assualt and rape by multiple women. Another accuser (of awful and predatory actions, but not assault) who's just stepped forward is a young actress who recounts her various encounters with Weinstein in a New York Times op/ed. Her story is less frightening than those who say they were criminally victimized, but the account reveals the depths of Weinstein's apparently calculated and streamlined depravity.  Her story began as a college undergraduate:

Not long after we met in Berlin, Harvey wrote to me inviting me to attend a screening of a film — a competitor’s film similar to one he had produced. He said we would be watching it with his family at his home in Westport, Conn., which was not far away from New Haven, where I was living at the time. He would send a car to pick me up. I accepted the invitation. The driver and I met Harvey in the little town of Westport, where he informed me that we would be having lunch at a restaurant before getting to his home. I did not think much of this. It was a busy restaurant, and as soon as we sat down he ordered a vodka and diet soda for himself. I asked for a juice. Harvey was unimpressed with my choice and told the waiter to bring me a vodka and diet soda instead. I declined and said I wanted the juice. We went back and forth until finally he turned to the waiter and said, “Get her what I tell you to get her. I’m the one paying the bill.” I smiled and remained silent. The waiter left and returned with a vodka and diet soda for me. He placed it on the table beside my water. I drank the water. Harvey told me that I needed to drink the vodka and diet soda. I informed him that I would not...

I settled in for the film, but about 15 minutes in, Harvey came for me, saying he wanted to show me something. I protested that I wanted to finish the film first, but he insisted I go with him, laying down the law as though I too was one of his children. I did not want another back-and-forth in front of his kids, so I complied and left the room with him. I explained that I really wanted to see the film. He said we’d go back shortly. Harvey led me into a bedroom — his bedroom — and announced that he wanted to give me a massage. I thought he was joking at first. He was not. For the first time since I met him, I felt unsafe...the members of his household, the potential witnesses, were all (strategically, it seems to me now) in a soundproof room.

Months later, after she'd had a non-eventful meeting with him with several friends, she agreed to meet Weinstein for dinner, in public. It quickly became apparent that he had other plans:

Harvey arrived and the assistant immediately disappeared. We ordered drinks and starters. Again he was offended by my nonalcoholic beverage choice but he didn’t fight me on it as hard. Before the starters arrived, he announced: “Let’s cut to the chase. I have a private room upstairs where we can have the rest of our meal.” I was stunned. I told him I preferred to eat in the restaurant. He told me not to be so naïve. If I wanted to be an actress, then I had to be willing to do this sort of thing. He said he had dated Famous Actress X and Y and look where that had gotten them. I was silent for a while before I mustered up the courage to politely decline his offer. “You have no idea what you are passing up,” he said. “With all due respect, I would not be able to sleep at night if I did what you are asking, so I must pass,” I replied. His whole demeanor changed at that point. “Then I guess we are two ships passing in the night.” I had never heard that saying before, so I remember asking him what it meant. “It means just that,” he said. “We are two ships going in two different directions.” “Yes, I guess we are.” “So we are done here,” he said. “You can leave.” We got up, having not eaten anything, and he led me out of the restaurant.

What a charmer.  Assuming her story is true, and that seems like a pretty safe bet at this point, thank goodness this young woman had the courage and character to stand up to such a powerful man and extricate herself from those frightening scenarios.  In case you missed it, I'll leave you with a highly interesting take on the whole Weinstein imbroglio from a member of Congress.  Feel free to play the "if it were a Republican" media game as you listen to this:

Reminder: The Democratic National Committee and the Clinton Foundation have not returned Weinstein's donations.