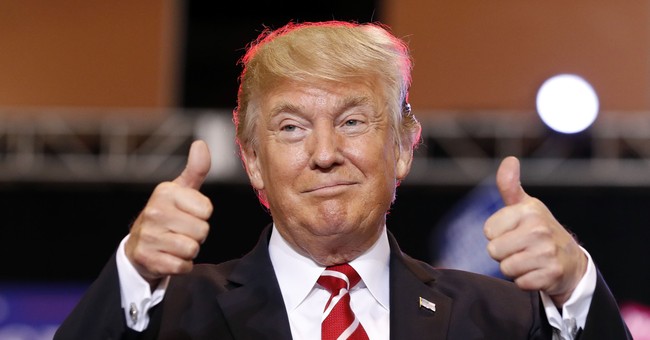 I'm starting to wonder what President Trump's approval rating would look like if he simply emerged from Mar-a-Lago once a month to point at a chart filled with positive economic news. These are big, beautiful, tremendous numbers, America.  You're welcome.  Let's keep going.  See you in a few weeks!  Earlier in the week, I quoted extensively from a Harris-Harvard national survey on free speech issues, but that data set measured public opinion on more generic questions, too.  Two significant disconnects -- also reflected in other polling -- caught my attention: First, a heavy majority of respondents said that the country is on the wrong track overall (30/59), but when that question was refined to ask about the US economy, the numbers flipped into positive territory (47/35).  Similarly, Trump's job approval is heavily underwater (43/57), but on "stimulating jobs" and handling the economy, he attracts majority approval.  So in spite of all of the sound and fury over race relations, Russia, and sundry controversies du jour (not to minimize the importance of any of those), some of the positive economic indicators are obviously breaking through.  Here's another fresh stat for the White House to trumpet:

The U.S. economy grew faster than initially thought in the second quarter, notching its quickest pace in more than two years, and there are signs that the momentum was sustained at the start of the third quarter. Gross domestic product increased at a 3.0 percent annual rate in the April-June period, the Commerce Department said in its second estimate on Wednesday. The upward revision from the 2.6 percent pace reported last month reflected robust consumer spending as well as strong business investment. Growth last quarter was the best since the first quarter of 2015 and followed a 1.2 percent pace in the January-March period. Economists had expected that second-quarter GDP growth would be raised to a 2.7 percent rate.  Retail sales and business spending data so far suggest the economy maintained its stamina early in the third quarter. Economists saw a limited impact on growth from Hurricane Harvey, which devastated parts of Texas.

Meanwhile, Ed Morrissey notes that ADP's closely-watched jobs estimate for August is also looking fairly robust. We'll wait for the official numbers to be released, but it seems as though job growth is chugging ahead:

Private sector employment increased by 237,000 jobs from July to August according to the August ADP National Employment Report . Broadly distributed to the public each month, free of charge, the ADP National Employment Report is produced by the ADP Research Institute® in collaboration with Moody’s Analytics. The report, which is derived from ADP’s actual payroll data, measures the change in total nonfarm private employment each month on a seasonally-adjusted basis…“In August, the goods-producing sector saw the best performance in months with solid increases in both construction and manufacturing,” said Ahu Yildirmaz, vice president and co-head of the ADP Research Institute. “Additionally, the trade industry pulled ahead to lead job gains across all industries, adding the most jobs it has seen since the end of 2016. This could be an industry to watch as consumer spending and wage growth improves.”

July's jobs number beat expectations, too.  As the US economy continues to strengthen, and with markets generally performing well, Republicans would do well to recall that the promise of a pro-growth agenda is baked into some of these statistics.  Progress must be sustained and built upon.  Expectations must be met.  Having already booted the ball on Obamacare reform (an issue that will not just go away, due to the status quo's continued failures), the GOP is gearing up for a major tax overhaul this fall.  The president spoke about the effort yesterday in Missouri, laying down a gauntlet for Congressional leaders:

“President Trump is taking the case for tax reform straight to Main Street. Here in the House, we’ve made it clear that our top priority this fall is reforming the tax code and cutting people’s taxes. Right now, our tax code is burdensome, incomprehensible, and puts American businesses at a severe disadvantage on the world stage. We want American companies to hire here and make things here. We want Americans to be able to keep more of their hard-earned money. That’s why we are committed to reforming the tax code and why President Trump reiterated his commitment today in Missouri. We are united in our determination to get this done.”

He and other Congressional Republicans say they're committed to fulfilling this major promise -- and it seems like some members down the hall have internalized the wages of another high profile failure: