Analysis: Why Trump Should Submit the Paris Accord to the Senate as a Treaty 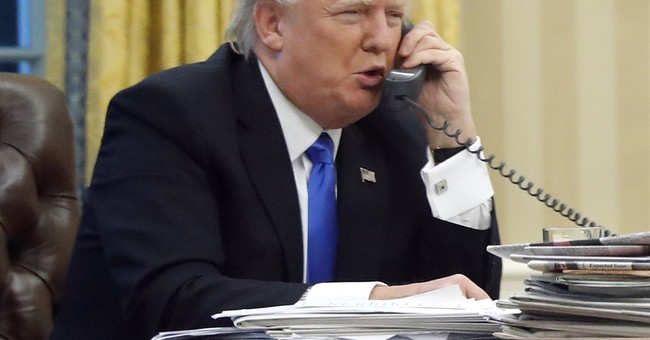 The president's final decision on the matter will be announced this afternoon, so I hope the White House has considered this option, which conservative writer John Podhoretz floated on Twitter yesterday. Setting aside all of the policy arguments for or against the climate change agreement, the reason President Obama pursued this global legacy item in unilateral fashion is because -- as was the case with the terrible Iran nuclear deal -- he couldn't count on securing votes from two-thirds of the Senate.  Not even close.  Treaties are binding and can't be reversed at the whim of an incoming administration.  If Paris is such an essential pillar of American leadership in the world, and if its symbolic value (it accomplishes virtually nothing on substance toward its stated goals) outweighs its potential economic harm, let Congress' upper chamber enshrine it as official US policy. That's how our system is designed to work, so how about it?

Trump should just submit the Paris accords to the Senate as a treaty.


(1) This move could easily be defended as a constitutionally-sound punt that would force elected, accountable representatives of the people to make a decision with large national and international ramifications. They'd have to engage in a public debate, weigh the arguments, and do their jobs. Trump is already a deeply controversial and polarizing figure; handing this ball off to the branch of government that Obama routinely ignored would broaden the base of this decision-making process, rather than making Trump the lightening rod yet again.

(2) Politically speaking, the last people who want any such vote to take place are Democrats representing industrial states whose citizens would get hammered by the Paris Accord's standards -- which are unenforceable and ineffective in impacting global temperatures, yet would undoubtedly pack an economic punch. Those who vote to ratify the treaty would open themselves up to hard-hitting attacks about fewer jobs and higher energy costs for working class families. Those who vote against it would risk further infuriating the left-flank "resist" crowd in their base, who may initiate intraparty purges.  Some Democrats are downright enthusiastic about imposing soaring energy costs on average Americans.  Let's see if all of their left-of-center brethren agree.

(3) Arguments against the submission of this agreement as a treaty requiring Senate approval are weak. If the Paris deal is truly as vital as its defenders claim, wouldn't formalizing it be far preferable to its current non-binding, easily-unraveled status? Furthermore, if the United States is going to be quasi-obligated to make major changes to its economy, including absorbing some serious pain for millions of people (see link above), that decision shouldn't be temporary, imposed by a now-powerless ex-president and the "global community."  Our system of checks and balances exists for a reason. We should honor it, particularly when the stakes are high and the potential trade-offs significant.  If Democrats, who have suddenly gained a deeper appreciation for the legislative branch constraining an executive, want to cheerlead for unilateralism again on this front, let them.  But their contortions will look like cynical, ends-justify-the-means opportunism.  I'll leave you with this National Review column endorsing the idea of kicking this over to the Senate, which makes a case based on constitutional, policy, and political considerations:

My article from November making the case for submitting to senate: https://t.co/wd41MIu2AK


Also consider this March editorial from the Wall Street Journal that highlights the issue of American sovereignty in the face of global environmentalist special interests.  And let's not forget what happened the last time the Senate voted on a major climate protocol.