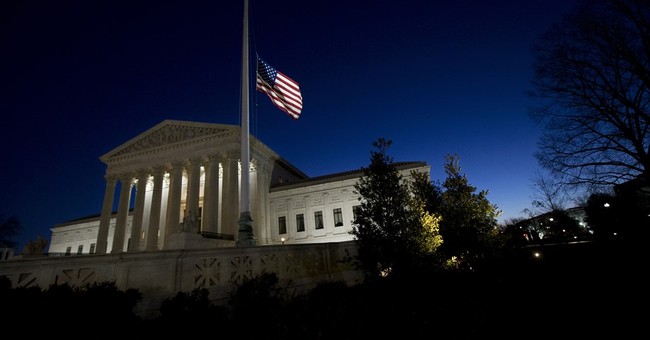 We made passing reference to this yesterday, and Matt wrote about the latest reported development over the weekend, but I think this subject merits as much virtual ink as we can devote to it. President Trump's most important and lasting early legacy test will come in the person of his nominee to replace the late Antonin Scalia on the Supreme Court. Over and over again on the campaign trail and in debates, he promised to fill this vacancy with a jurist in the mold of the great man who died last year. What most conservatives are hoping for is a young, reliable, unwavering constitutionalist. As such, what to make of the two names that have emerged as the alleged frontrunners for the job? William Pryor is a rock-ribbed right-winger with an unambiguous paper trail that so worried Democrats that they mounted filibusters against his nomination to the 11th Circuit Court of Appeals. He was eventually (narrowly) confirmed thanks to the 'Gang of 14,' whose efforts to preserve the filibuster for nominations were eventually blown up by the blessedly-departed Harry Reid. Is there any hint that Pryor might "evolve" leftward in office, as happened with a number of Republican-appointed justices in recent decades? Not a chance:

Pryor isn’t just regarded as a brilliant legal mind; he is viewed as the most rock-ribbed conservative of any potential Supreme Court appointee. His ideological mooring makes him hugely appealing to elements of the conservative movement who have felt betrayed by Chief Justice John Roberts and are looking for the next Republican nominee to be an absolute slam-dunk. Pryor would certainly be that: He famously once ended a prayer by saying, “Please, God, no more Souters.” But there’s a downside to Pryor’s staunch conservatism: He could prove exceedingly difficult to confirm.

That's...not subtle.  Question, though: Would he "prove exceedingly difficult to confirm," as that National Review write-up asserts?  He's been approved to sit on a major federal court amid Democratic outrage once before, so anything they trot out against him will likely be old news.  And given Reid's destruction of the filibuster for almost all presidential nominees -- coupled with the fact that he cleared the aforementioned 'Gang of 14's' subjective "extraordinary circumstances" threshold -- wouldn't he be a shoo-in, albeit a controversial one?  As we flagged yesterday, Mitch McConnell is certainly sending those signals:

"The nominee will be confirmed," says McConnell of whomever Pres Trump puts forward to fill the Scalia vacancy on SCOTUS.

Read Allahpundit's fairly convincing case that Pryor is the frontrunner for the job, which relies in part with the important clue that Trump said this after meeting with Pryor one-on-one. He said that he'd put forward his selection within two weeks of being inaugurated, but is this necessarily a done deal? Not so fast. CBS News' sources say that another name is at least under very serious consideration:

.@JanCBS on Trump's Supreme Court nominee: I'm being told by my sources that a leading candidate is Neil Gorsuch. https://t.co/dCNY7P0alw pic.twitter.com/BxS5b3tdi6

Would Gorsuch be any less solid than Pryor? Via AP, here's the respected SCOTUS blog marveling at how remarkably Scaliaesque he's been throughout his career on the bench:

For one thing, the great compliment that Gorsuch’s legal writing is in a class with Scalia’s is deserved: Gorsuch’s opinions are exceptionally clear and routinely entertaining; he is an unusual pleasure to read, and it is always plain exactly what he thinks and why. Like Scalia, Gorsuch also seems to have a set of judicial/ideological commitments apart from his personal policy preferences that drive his decision-making. He is an ardent textualist (like Scalia); he believes criminal laws should be clear and interpreted in favor of defendants even if that hurts government prosecutions (like Scalia); he is skeptical of efforts to purge religious expression from public spaces (like Scalia); he is highly dubious of legislative history (like Scalia); and he is less than enamored of the dormant commerce clause (like Scalia). In fact, some of the parallels can be downright eerie.

Another thing about this mild-mannered Coloradan: He's accomplished and young. Writes AP, "Gorsuch’s career arc in public service has been meteoric. He joined the DOJ in 2005, was elevated as a judge to the Tenth Circuit in Colorado a year after, and now is in line for a Supreme Court appointment a little more than 10 years later. He’s all of 49 years old, five years younger than the nominal frontrunner for the Scalia vacancy, William Pryor. Put him on the Court this year and there’s a fair chance he’ll still be there in 2050." That sounds rather appealing, doesn't it? One more question: What about a female pick like Diane Sykes or Joan Larsen?  Politico reported earlier this month that there's a plan emerging, and a smart one at that:

The thinking inside the transition, according to multiple people involved in the internal deliberations, is that Scalia’s replacement offers Trump and the conservative movement the best chance for an unabashedly rock-ribbed replacement because it would not fundamentally shift the court’s balance of power...But in the current search process, Trump’s team is also hoping to identify a conservative candidate — possibly a woman — who could be more politically palatable, or at least harder for Senate Democrats to oppose, if Kennedy or Ginsburg leave the court.

Elevate a hardcore righty now, then save the conservative but "more politically palatable" and "harder to oppose" choices (see: the Left's identity politics playbook) for a potential second or even third opening. If that reflects Team Trump's thinking, it strikes me as savvy and sensible. So who gets the first nod? Place your bets now; we'll know soon enough.