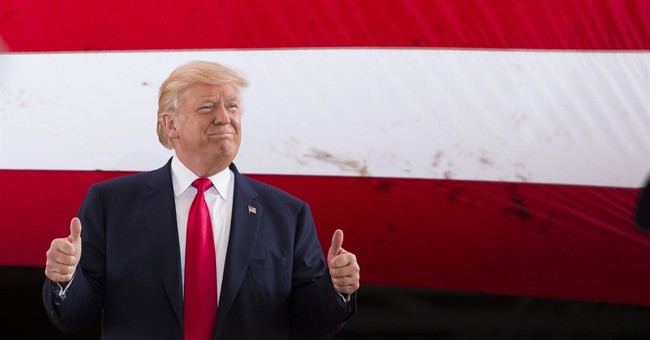 One of the concerns about Donald Trump's continued slide in the polls, and the sizable contingent of elected GOP officials breaking ranks with their nominee after offensive audio recordings emerged last week, was that Republicans' tenuous party unity was fraying irreparably -- likely dooming the entire ticket in November. (A number of lawmakers unendorsed, then re-endorsed Trump, with some major donors reportedly demanding refunds). That worry remains front-and-center in many Republicans' minds, with whispers swirling about internal generic ballot numbers cratering over the past week. Here's Fox News' well-sourced Capitol Hill producer:

GOPers nervous about Senate. “We have seen a total collapse of the generic ballot,” said sr GOP source "It's going to be tough to hold"

For what it's worth, I've heard similar things, including that House Democrats are feeling more optimistic about scoring gains in the double-digits, even if internal numbers still show them shy of seriously competing to hand the gavel back to Nancy Pelosi.  On the Senate side, have close races started slipping away from Republicans, who've thus far done a remarkable job of keeping things very close?  Not exactly.  Or not yet, at least.  A quick overview: In Ohio, even in polling showing Hillary Clinton overtaking Donald Trump, Rob Portman's sizable lead remains rock solid.  Liberals got excited by a few tighter surveys in Florida, but Marco Rubio holds leads of seven and eight points in two of the latest polls of the race (which were in the field prior to the Trump tape and subsequent debate).  In CBS News' poll of Pennsylvania showing Trump sliding into the abyss (down eight), Pat Toomey was tied with his Democratic challenger; in another survey of the Keystone State, Toomey led by four points.  The margin in that race remains razor thin.  North Carolina's Richard Burr is outperforming both Donald Trump and his party's embattled GOP governor, even as Republicans I've spoken to are worried about his hands-off approach to campaigning.  Conservatives are hoping that highlighting the far-left ACLU record of Burr's opponent will push him over the top in the reddish-purple state. Can you imagine if a conservative male candidate had opposed the establishment of a sex offender registry?

Every poll in the Nevada Senate race has Republican Joe Heck leading Harry Reid's hand-picked successor, but that was before the "p***y grab" controversy exploded, leading Heck to walk away from Trump with an eye to the state's moderate electorate, but angering some of his supporters.  Missouri, meanwhile, is a rare battleground where Trump is running ahead of the Senate nominee, incumbent Roy Blunt.  The Republican is still ahead, but this is too close for comfort:

Blunt's campaign and allies are blasting his opponent as a would-be rubber stamp for Hillary Clinton, plastering the airwaves with ads on the subject.  Indiana Republicans still feel the wind at their backs, as new revelations about Obamacare-backing-Democrat-turned-DC-lobbyist Evan Bayh make him look shadier and less honest than ever:

Evan Bayh met several times with executives from a future employer during his final months in the U.S. Senate — a direct contradiction of what his campaign has said in recent weeks. Bayh landed a lucrative job with private equity giant Apollo Global Management shortly after leaving office in January 2011. He had in the months prior worked against a tax increase on carried interest and a provision of the Dodd-Frank Wall Street Reform act that would have hurt the bottom lines of companies like Apollo. The timing of the new job prompted IndyStar to ask Bayh's campaign about a half dozen taxpayer-funded trips Bayh took to New York City during the last half of 2010. The flurry of travel was unusual for Bayh — he hadn't used taxpayer money to travel to New York City since 2002. In response to IndyStar's inquiries, the campaign said in early September that Bayh didn't meet with anyone from Apollo during those trips. Turns out, that wasn't the case. The Associated Press reported Saturday that Bayh stayed overnight three times at one Apollo executive's New York City residence, and met twice with the company's chief executive, Leon Black. The report was based on Bayh's previously unreleased 2010 schedule.

It looks like Bayh was voting for provisions while in office that would directly benefit the company that turned around and paid him a windfall when he retired -- and that he lied about meeting with that company's top executives.  New financial disclosure forms show that Bayh hit the jackpot from cashing out after walking away from the people of the Hoosier State.  Here's the NRSC's tough new ad against "Bailout Bayh," whom they call "a sellout, not a Senator:"

Meanwhile, don't look now, but are we sure Wisconsin is off the board? A recent Loras College poll has Republican Ron Johnson leading Russ Feingold by five points (a big time outlier, even as the same poll shows Hillary comfortably ahead), but Marquette's latest also shows a very close competition. Hmmm:

I still put more stock in the NRSC's decision downgrade their investment in this race than any handful of polls, but it's worth pointing out that Marquette's pollster is highly respected, and that outcome comes from the same batch of numbers that measured Clinton maintaining a comfortable advantage in the state. Taking all of this information together, it's fair to conclude that while Trump's struggles and party disunity could absolutely take a serious toll in a few weeks, Republicans' chances of holding the Senate have not yet gone up in smoke. Stay tuned for new data points in the coming week or two. I'll leave you with one of Johnson's positive ads: