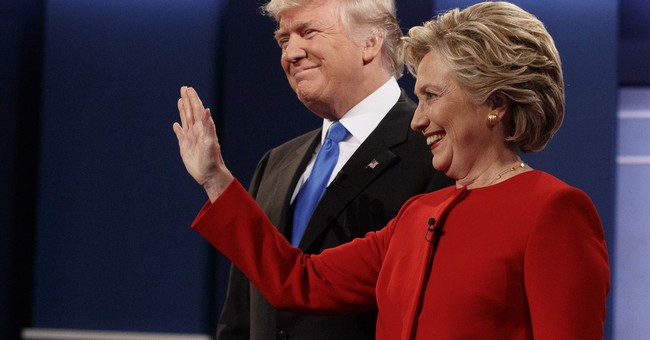 (1) On policy substance -- ideology aside -- Hillary Clinton was more informed and prepared than Donald Trump by a wide margin, as expected. She also remained mostly cool and collected, even as the debate threatened to veer off the rails on several occasions. She was smug, rehearsed and pedantic at times, and exhibited some breathtaking hypocrisy (yes, let's hear some more about the importance of data security, Madame Email Scandal), but my instinct is that she won this exchange overall. She did so over the last hour-plus of the debate, pulling away after Trump held his own early. He may have been a little heavy on the interruption over that opening stretch for someone with a temperament problem, but he hit his central themes hard and pretty effectively. When Clinton went on offense over tax returns, the federal race discrimination lawsuit against Trump's company and birtherism, his responses were woefully insufficient (despite some flashes of decent parrying, like highlighting her deleted emails, and noting her 2008 campaign's scurrilous anti-Obama tactics). She won because she baited him, and he took the bait every time, missing far too many chances to land obvious thematic and specific counter-punches -- on emails, on the Clinton Foundation, on Benghazi.  Rarely did he put her on the defensive, which isn't especially hard to do.  His lack of focused preparation was, once again, quite clear.

(2) Poor debate performances, temper flare-ups, and manifest ignorance occasionally dented Trump during the primary, but he always prevailed in the end. My instinct is that this night hurt him and helped her.  But my instinct also told me more than a year ago that he was an unserious candidate with no chance, which was wrong (and quickly abandoned as a working theory last summer). We will not have any solid grasp on how the public felt about this debate until a full round of solid, scientific polling is conducting, which will take several days. In the meantime, here is what CBS News' focus group concluded:

You can say here: https://t.co/rFZYklEsdr

After impressing in the early stages, some of his worst moments with this panel of undecided Pennsylvania voters involved Birtherism, tax returns and temperament. Did he come across as a plausible president for 90 minutes? We'll see what the voters say. I have my doubts. Then again, I'm not convinced his performance was as disastrous as many talking heads are already saying. As Trump pointed out several times over the course of the night, Mrs. Clinton has prosecuted many of these lines of attack against him in a massive bombardment of paid advertising, spread over many weeks. Her standing has fallen. Did swing voters learn anything negative tonight that they didn't already know? If Trump takes a polling hit, and he might, it'll be because he failed the plausibility test among people who've been giving him a chance so far.

(3) The debate over the moderator began before the evening concluded. Lester Holt did a fine job for most of the evening, not intervening too often, and using a light touch to allow the candidates engage each other. Some Trump supporters and surrogates believe his tougher questions and challenges were directed at their man, and not Hillary Clinton. They're right. On Birtherism (a legitimate question on which Trump did himself no favors), on his withholding of tax returns, on his Iraq war record, on 'say it to her face,' and even on the 'will you respect the election's outcome?' question, the sharper push-back and skeptical premises all went in one direction. Off the top of my head, I can't recall a single question slanted against her statements or record. I won't be surprised if voters at the town hall-style debate prod her with harder questions than Holt did.  So while he wasn't horribly biased, it seems clear that Holt took note of the Left's over-the-top outcry against his NBC colleague Matt Lauer, and overcompensated.  Working the refs works.  For Democrats.

(4) I saw a fair amount of this type of analysis immediately after the debate, and I think it's wrong:

That would be true of a conventional candidate in a conventional year. But this is Donald Trump and we're living through 2016. Trump personally rolling into the spin room after a debate isn't an indication of much of anything, other than the fact that he floods the media zone whenever possible.  He did this in the primary, he's doing it again in the general.  And he's pummeling away at his message every chance he gets.  It's that simple, I think.

(5) An incomplete hodgepodge of memorable moments: For Trump, his refrain about Hillary embodying the same old, disappointing, under-performing system broke through early. He turned her "experience" argument against her twice. First, when she stated that she'd thought about a lot of issues, he shot back "yeah, for 30 years." And toward the end of the debate, after her strong 'stamina' line, he recovered with, "Hillary has experience, but it's bad experience." Meanwhile, Clinton's ad-makers will be busy. When she attacked Trump for rooting for the housing crash in order to make money, he didn't deny it. "It's called business," he boasted. When she speculated that he hasn't turned over his tax returns (which he later conceded he could do, against his lawyers' advice) because he's avoided paying any income taxes, he appeared to confirm her suspicion. That's "smart," he said. But again, I ask: Will more seemingly devastating ads matter at all?  And when he was making a case against President Obama's record at one point, he gestured at Hillary and referred to Obama as "your president." I'm fairly confident he meant your party/your administration, but Democrats pounced all over it as a racial code word.  It will almost certainly be used to motivate black voters. Finally, another solid, clean hit for her was "admitting" to have prepared for the debate, as well as for the job she's seeking. The implication about Trump in that well-delivered (likely also prepared, ironically) soundbyte was obvious.

It was a very unusual debate, which was always going to be the case. To my real-time eyes and ears, in the moment, she won -- despite not making much (any?) headway on likability. But hey, given the insanity and throw-out-the-rulebook vibe of this entire cycle, what do I know? Let's see how (and if) the polls move. My gut says that they will, a bit, toward her.  But there's a reasonable chance that they won't, or that any impact will be short-lived.