It was an eventful political weekend -- and between her walked-back "deplorables" smear and her secrecy-shrouded stagger and collapse at a 9/11 memorial event in New York, it was not a good one for Hillary Clinton.  Nevertheless, the Washington Post and ABC News released a new national survey yesterday that contains relatively good news for Hillary Clinton, although improved Republican coalescence around Donald Trump and an intensity gap is keeping the race competitive. Clinton holds wide leads among adults and registered voters, and in head-to-head match-ups. When a likely voter screen is applied to the data, however, her advantage shrinks to a more manageable deficit for Trump -- who nevertheless is still mired in his now-familiar mid-30's to low-40's range. It appears to remain the case that the longer third party candidates remain statistically relevant in the polling, the better it is for Trump:

That eight-point national lead in the head-to-head is commanding, but Gary Johnson and Jill Stein are disproportionately peeling support away from Hillary, an unpopular frontrunner many Americans are looking for an excuse to vote against. With registered voters, she's up 11 (two-way) and ten points (four-way), respectively, suggesting that an elite turnout operation could boost her margin. Among adults generally, those numbers are 15 and 13 points. Digging below the toplines, the best news for Hillary is that she edges Trump on all four issue sets polled -- it's close on a few (economy +4, terrorism +3, immigration +2), with a more pronounced gap on others (taxes +9, trade +16). She's also beating him on candidate characteristics, albeit by single digits. Except for one important metric: 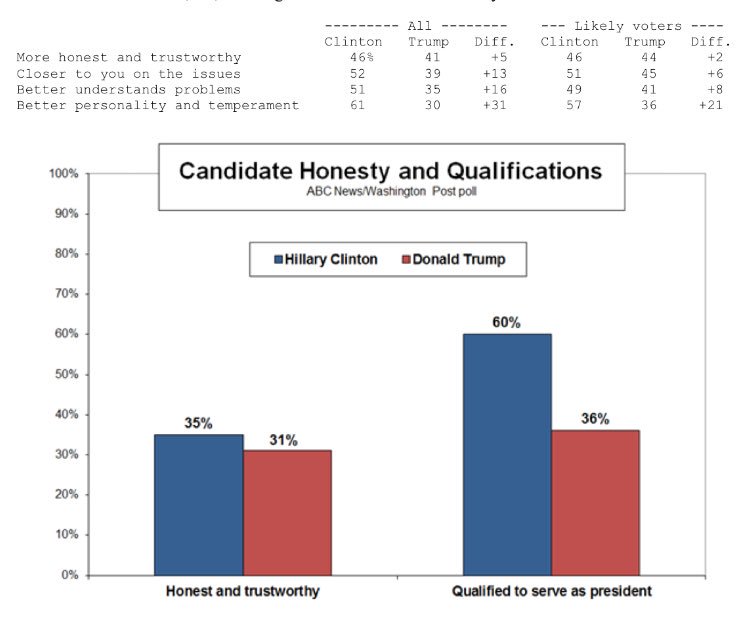 For the umpteenth time, Trump's gigantic 'qualification' deficiency can be mitigated significantly with strong, sharp, informed debate performances. Is he doing what it takes to seize his opportunity?  Based on some public statements, there are reasons to be skeptical.  We'll see. Now, here's the best news for Trump in this poll: 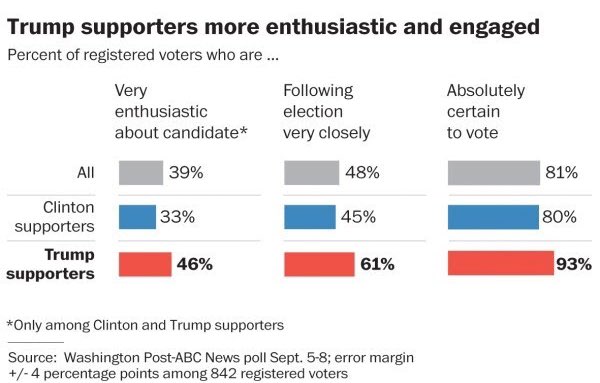 The clear enthusiasm gap, and Trump's improvement among Republican voters, are keeping him in this thing right now.  Meanwhile, we were also treated to a slew of battleground state polling yesterday, which featured mixed results:

Arizona and Georgia (McCain/Romney states) are margin of error races according to NBC/WSJ's numbers, but so are Nevada and New Hampshire (Obama won each twice).  And then there are CBS News/YouGov's findings out of the two biggest swing state prizes:

That Ohio result is a bit outlier-ish at the moment, but Florida looks bang on. We don't have anything fresh out of critical Pennsylvania, but this analysis ought to give pause to Trump supporters counting on loads of "undercover Trump voters" to pull him over the top in a state where he's consistently trailing.  I'll leave you with another follow-up on the Senate post I wrote late last week.  Quinnipiac released surveys on Friday showing Republican incumbents leading comfortably in Ohio and Florida, and with modest or thin leads in North Carolina and Pennsylvania.  The batch of results from NBC/WSJ contained more promising news for the GOP:

McCain up big and Nevada very close with Heck up by a nose are not unusual or surprising outcomes.  Kelly Ayotte clearing 50 percent and leading by eight is both unusual and surprising.  For now, it looks like an outlier (this poll also has the presidential race in New Hampshire more competitive than many others), but Republicans will happily take it.  Either way, Ayotte running substantially ahead of Trump is another reassuring data point for the Senate GOP.