Bill Clinton: Our Foundation is Fully Transparent, You Know 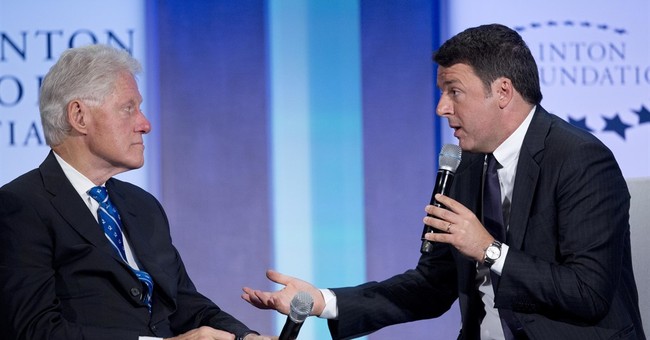 Via the Free Beacon, here's Bill Clinton -- who said on Sunday that of course some people probably gave money to the Clinton Foundation to try to curry favor and pursue their interests -- lying about how fully transparent his family's organization has been. He mentioned it would be "impossible" for the Clinton Global Initiative to carry on as-is if Hillary's elected (but apparently everything was just fine when she was running America's foreign policy, for some reason), then dismissed pay-for-play allegations by attacking the media:

“I learned already in this election that some people were subject to the presumption of guilt just because they were participating,” Clinton said...Clinton then threw the “political press” under the bus, saying they did not have previous exposure to how the foundation worked. “We disclose everything, who’s giving, what they are doing, and all that,” Clinton said.

Wrong. We've fact-checked Hillary on similar nothing-to-see-here assertions in the past, so kindly allow me to quote myself responding to this flashback clip of big promises from Hillary during her Senate confirmation hearings:

"Very transparent...all contributors will be disclosed." They weren't. "Foreign government pledges will be submitted to the State Department for review." They weren't. And that "extremely low percentage" of funds going to overhead? Very dubious, which is why the Clintons' "charities" (click through for an explanation of the scare quotes) have been flagged by oversight groups. Charity Navigator removed the Clinton Foundation from its 'Watch List' late last year, under what we know to be immense political pressure.

In addition, the Clinton Foundation had to refile several years' worth of taxes after failing to disclose tens of millions of dollars in contributions from foreign governments, and Bill's overseas speaking gigs were almost universally and immediately rubber-stamped by Hillary's State Department. Different Clinton, same distortions.