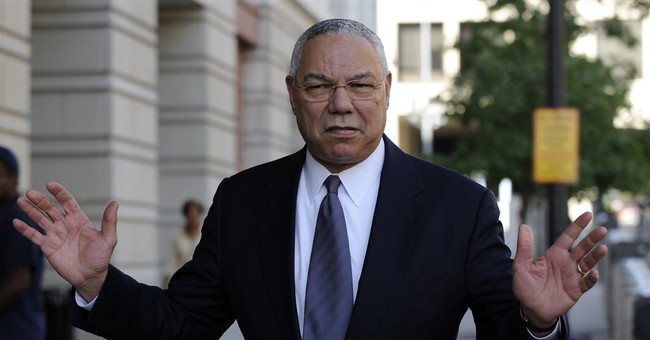 The Colin Powell email hack continues to churn out some eye-popping messages -- from the former Secretary of State expressing bitter resentment at Hillary's "minions" trying to drag him into her email scandal by drawing false equivalencies, to his brutal assessment of Donald Trump, to his smackdown of Hillary's self-destructive hubris. Another newly-revealed correspondence shows Powell expressing his preference not to vote for his "friend" Mrs. Clinton, scalding her as a power-hungry and avaricious, and making a rather...vivid description of Bill Clinton's alleged never-ending sexual escapades. Yowza (content warning):

It might be a safe bet that a Powell endorsement perhaps isn't in the cards for either of these candidates.  Another email between Powell and a Democratic mega donor raises even more questions about Hillary Clinton's longterm health issues.  In a good catch, The DC notes that Powell's virtual interlocutor responded to this observation about Hillary's physical appearance by relaying a story from Sen. Sheldon White House -- a liberal Rhode Island Democrat -- who said that he and Hillary attended a 2015 event together at which the former Secretary of State demonstrated physical frailty:

Leeds, who donated to Clinton’s 2008 presidential campaign, wrote back to share information he obtained regarding Clinton’s condition from Rhode Island Sen. Sheldon Whitehouse. “Sheldon Whitehouse, who is a huge Clinton supporter, said they were both giving speeches at the same event a few months back and she could barely climb the podium steps,” he told Powell.

Hmm.  Another reason the Hillary illness storyline isn't fading is that her husband keeps making "misstatements" that pump more oxygen into the controversy.  In a CBS News interview, the former president said that his wife has experienced similar travails on multiple occasions in the past, initially saying this happened "frequently," before correcting himself.  The network edited the clip to remove those few seconds, ostensibly due to time constraints.  I debated the issue with a Clinton supporter on Megyn Kelly's show last night, agreeing that Donald Trump should be much more transparent about his medical history and tax returns, but pointing out that whenever Hillary gets into trouble or faces criticism, her defenders reflexively scream "but Trump!"  Right on cue, her backer confirmed my point -- via Right Sightings:

Then, at a Nevada campaign stop on Wednesday, Bill Clinton said that Hillary has "the flu," which he said isn't at all uncommon.  Except she doesn't have the flu, at least not according to the Clinton campaign's official story at the time.  A spokesman claimed he "misspoke."  This is a lot of misspeaking about the wrong affliction:

Bill Clinton in Las Vegas said he just spoke to Hillary and she's "feeling great" & downplayed her illness—but said she had the flu.

"Nothing unusual about getting the flu—last time I checked, billions of people were getting it every year," Clinton said of Hillary

Allergies, overheating, pneumonia, the flu -- who can keep track, really?  I'll leave you with a tongue-lashing I delivered on Outnumbered today, directed at CNN's Christiane Amanpour over this 'hackstastic' monologue on the subject, followed by Donald Trump's reality show-style rollout of the (partial) results of a recent physical he underwent:

What a time to be alive.

UPDATE - Hillary has now released an updated letter from her doctor, too, which is a very far cry from her full medical records.