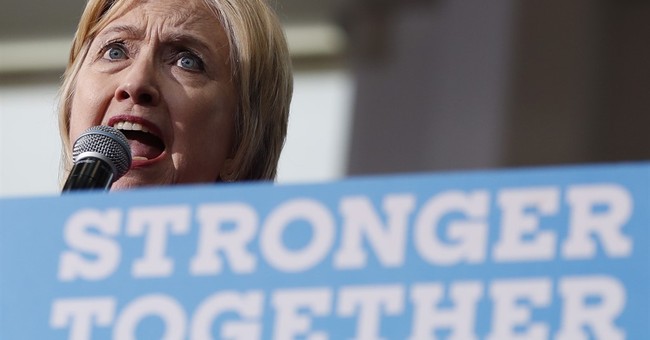 In our 2016 electoral map analysis last week, we traced Donald Trump's most plausible path to victory, based on virtually all available data: Namely, hold all Romney-won states, then flip four additional states into the "red" column: Iowa/Nevada, Ohio, Florida, and Pennsylvania (listed in degree of difficulty). As more information flows in, this strategy appears sound. New CBS News/YouGov polling numbers out of Iowa and Ohio show a dead even and fairly competitive race, respectively:

In each case, GOP Senate candidates are running substantially ahead of Trump; both Chuck Grassley and Rob Portman lead their Democratic opponents by seven points.  Interestingly, a potentially meaningful percentage of Trump-skeptical voters in Ohio say that genuine apologies from the Republican nominee for some of this least appealing behavior could cause them to reconsider voting for him.  This might explain the recent attempt by his new handlers to prevent him from going off the rails, like this.  For what it's worth, fresh Monmouth polling out of the Buckeye State mirrors YouGov's Ohio figures:

So the state of the race in this critical battleground remains virtually unchanged: Hillary Clinton leads Donald Trump by roughly five points, yet has not put him away.  And incumbent freshman Sen. Rob Portman far outperforming the man who will sit at the top of his ticket in November (the same dynamic can be seen with Marco Rubio in Florida).  Election data guru Nate Silver notices that as of right now, national polling has tightened a bit, but that effect hasn't yet trickled down into the most important swing states:

Trump has gotten some slightly better results, with national polls suggesting a race more in line with a 5- or 6-percentage-point lead for Clinton instead of the 7- or 8-point lead she had earlier in August. But state polls haven’t really followed suit and continue to show Clinton with some of her largest leads of the campaign. Trump received some decent numbers in Iowa and Nevada, but his polls in other swing states have been bad. Overall, Trump has gained slightly in our forecasts: He’s up to a 15 percent chance of winning the Electoral College in our polls-only model, up from a low of 11 percent a week ago. And he’s at 25 percent in polls-plus, up from a low of 21 percent. But the evidence is conflicting enough that I don’t think we can rule out a larger swing toward Trump or, alternatively, that his position hasn’t improved at all.

I should also caution that Trump fans ought to be wary of the lone national poll that shows him pulling into the lead.  The LA Times/USC tracker's internals show the Republican winning nearly 40 percent of Hispanics, pulling in an even higher percentage of other nonwhite voters, and winning Millennials.  Those things...aren't going to happen.  In any case, as we laid out in some detail, Pennsylvania is the bellwether to watch.  It's a must-win for Trump, especially with Colorado and Virginia effectively off the board:

Clinton's campaign is not planning to air ads in Virginia or Colorado ahead of Election Day https://t.co/9zfXiOwUd8 pic.twitter.com/Q3258Wh7aD

Fun fact: Trump's co-chair in one of Colorado's most important county is a 12-year-old.  The Clinton campaign may be understandably confident in those two states, but that doesn't mean they're sitting pat.  In response to Trump's belated but welcome first general election TV expenditures, Team Hillary has announced an $80 million combined ad buy in Florida, Pennsylvania, New Hampshire, Iowa, Nevada, Ohio, North Carolina, and part of Nebraska.  She's doubling down on her enormous advantage in this category.  But note well that despite her stubbornly solid lead in Pennsylvania, she's still playing and spending there.  Why?  New party registration figures may provide a clue, and perhaps reinforce why Trump should push a full-court press in the state:

Hillary Clinton remains comfortably ahead by an average of 6 points in the Real Clear Politics average of national polls, and encouraging registration trends alone will be insufficient to carry Trump in must-win states like Pennsylvania, where he trails by an average of 9 points in recent polls. Meanwhile, Republicans have been losing ground in Hispanic-heavy Western battlegrounds of Colorado, Arizona and Nevada, where Democrats have boosted their voter registration standing in recent months. But the registration numbers in Eastern and Midwestern battleground states offer a rare piece of welcome news to Republicans bracing for the possibility of a November massacre. In Pennsylvania — where Democrats’ registration advantage has fallen by a fifth since the 2012 election, to 915,000 voters — more than 85,000 former Democrats have become Republicans this year, almost three times the number of voters who made the opposite switch.

Our colleague Ed Morrissey, author of the electoral deep-dive Going Red, reasons that credit here stems from a combination of long-term RNC ground game investments (which Trump has largely neglected), and the candidate's blue collar appeal in certain areas of the state.  One key question is whether those party flippers are brand new converts, or if they're mostly registered Democrats who've been voting Republican for years.  I'll leave you with each campaign's latest ad, plus a nugget from the 'alternate universe' file:

Monmouth poll: If Kasich were the GOP nominee, he'd be leading Hillary by...24 points in Ohio pic.twitter.com/Akima6N6lo