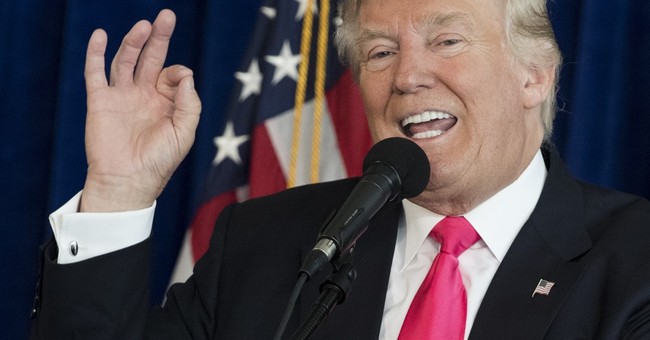 Earlier today, Donald Trump touched off another political firestorm when he directly addressed the Russian government during a press conference -- stating that he hopes Moscow's SVR managed to hack Hillary Clinton's unsecure email server, and musing that they'd be "rewarded mightily" for revealing its contents. He added that the Russians "probably" are not behind the (increasingly damning) DNC hack -- warnings about which the Democrats reportedly ignored for months -- which cuts against virtually all evidence and official conclusions.  Here's your nominee, Republicans:

In addition to an immediate slam from the Clinton camp, Trump's running mate rushed out a distancing statement within minutes, and the Republican Speaker of the House quickly called Russia a "global menace led by a devious thug" who should "stay out of this election." Former senior intelligence officials from both parties strongly condemned the billionaire's comments, one of whom will likely address the issue at greater length in his convention speech tonight. Let's get a few things straight, right off the bat: It is unacceptable for an American presidential nominee to encourage foreign meddling in our elections, especially via espionage. Trump is a dangerously reckless person who blurts out whatever is on his mind, then doubles down when criticized.  He also has a long history of publicly egging hackers on, in pursuit of sundry goals and conspiracies.  These are reasons why so many Americans view Trump as unqualified and unfit for the presidency.  With all that being said, and earnestly so, this extraordinary flare-up also reflects very poorly on the Democratic nominee.  This may seem like a small quibble, but it's an important point in terms of timing:

Not that anyone cares but Trump didn't ask Russia to hack anyone. The emails were deleted. The machine is with the FBI.

Hillary Clinton's egregiously unsecure server was wiped clean and effectively no longer exists -- she and her unaccountable team of lawyers saw to that long ago. The foreign penetration of her emails, therefore, has already taken place. And there's no use pretending it didn't happen, as Hillary continues to try to do. Several very senior US officials have called that outcome a virtual certainty.  It is extremely likely that the Russians and other foreign governments have all of those messages, thousands of which are classified.  The cache included more than 100 messages that were classified at the time they were sent and received by the Secretary of State, including top secret information.  It is possible and appropriate to be critical of both Trump's half-joking yet deeply irresponsible comments, as well as Hillary Clinton's deliberate misconduct that consciously compromised national security secrets for her own political protection.  Another angle, via Sean Davis:

[The Clinton campaign] did not explain how the e-mails, which Clinton said were about nothing more than her “yoga routines” and wedding planning for her daughter, could possibly pose a national security risk to the United States. Sullivan also failed to explain how unclassified e-mails “private personal e-mails” wholly unrelated to her work as Secretary of State — Clinton declared in an infamous 2015 press conference that she “did not email any classified material to anyone on my email” — could compromise American security.

Yes, Hillary repeatedly stated that the tens of thousands of emails her oversight-free team permanently destroyed had nothing whatsoever to do with her work, and therefore couldn't be classified or relevant to any investigation or FOIA requests.  But the FBI director determined that "several thousand" work-related emails were withheld, including classified ones -- not counting any of the unrecoverable messages that were wiped away for good.  Now Clinton's campaign is admitting that foreign powers hacking her unsecure email server is a threat to US national security after all.  This, in turn, is a concession that Clinton's scheme damaged our national security interests unto itself.  And she's supposed to be the responsible, tested candidate in this race?  Davis also reminds readers that Ted Kennedy asked our Soviet enemies to interfere in the 1984 election in order to defeat Ronald Reagan.  (That by no means justifies what Trump has done.  But at least he's created this mess out in the open.  Kennedy surreptitiously tried to undermine an American president by colluding with sworn US enemies, a fact we only discovered after the Evil Empire disintegrated). In any case, if Trump is not creepily aligned with, or financially tied to, Putin's Russia, he's doing a terrible job of convincing people of his innocence.  His campaign has slammed the door shut on releasing his tax returns (maybe some pro-Hillary foreign intelligence agency should hack and leak them, in the name of the public interest -- right Donald?), and then there's this:

I asked @realDonaldTrump:"Would you as president want to recognize #Crimea as Russian, lift sanctions?" - "Yes we would be looking at that"

Breathtakingly, it is not far-fetched to say that the Russian government is actively seeking to help Donald Trump win the presidency. If that's true, the next logical question is why.  Parting thought: If you're defending Trump today with an 'ends justify the means' mentality, imagine how you'd react if a foreign adversary were intervening on behalf of Hillary Clinton -- especially if she were openly cheering them on?  I suspect many enraged Trump followers would cite that hypothetical development as further evidence that she needs to be locked up. Also:

I recall Righties freaking out over foreign donations flowing to Obama in '08. Can't defend giant Russian in-kind donation via espionage.

We've Discovered the Real Reason the CDC Is Requiring All Kids Wear Masks in Schools
Townhall
'Someone got a phone call': Army general protects his account after losing Twitter battle to Hillsdale student
Twitchy
Inject This AOC Response to Kyrsten Sinema Straight Into My Veins
Redstate
Biden's COVID and Border Policies Collide With a Discovery at a Texas Whataburger
PJ Media