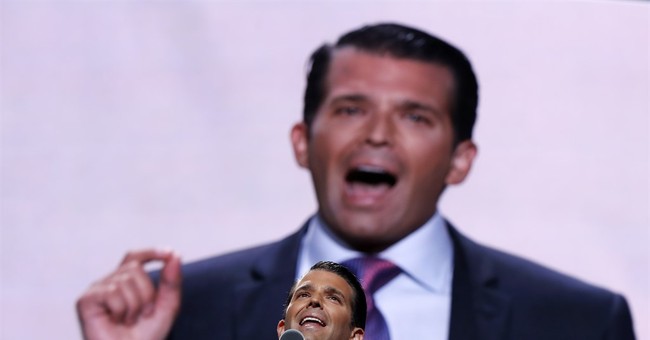 We were pretty unsparing in response to the Melania plagiarism saga on Monday night -- coming down hard on the Trump campaign for its inept malpractice, and skewering its incoherent spin the following day. So it's only fair to knock down some unfair criticism along similar lines. After his breakout performance on behalf of his father, allegations quickly arose that Donald Trump, Jr. had also stolen bits of his speech from another source.

Those sentences and formulations are, indeed, almost identical.  There's a reason for that.  Here's the man who penned the essay on the right...and who helped write the speech Donald Jr. delivered in Cleveland:

Except it wasn't stealing...

So the speechwriter repurposed one of his previous insights for the Trump campaign, by definition with permission.  Once that was cleared up, some critics persisted, insisting that self-plagiarism is still technically unethical in an academic setting.  But context is everything.  There's no harm, no foul here -- especially in light of the defense mounted by the Obama camp when these videos surfaced during the 2008 cycle:

No big deal, we were told; the two men were friends, and Patrick was cool with Obama cribbing his lines.  At the time, Obama was under fire from -- ta da! -- Hillary Clinton for using unoriginal passages without attribution.  "If your whole candidacy is about words, they should be your words," she said. So if the political standard of acceptability for this sort of thing is the granting of permission (and whoever inserted those lines into Melania's speech on Monday clearly did not receive any go-ahead from Mrs. Obama), Don Junior is in the clear.  One of Obama's former speechwriters echoed this point on Twitter last night:

If the Donald Trump Jr. lines weren't plagiarism because the author gave permission, neither was the Obama riff from Deval, who also did.

Non-issue.  I'll leave you with a reminder that the sitting Vice President is an actual plagiarist, as well as some early morning analysis from yours truly:

@DonaldJTrumpJr made one of the most effective arguments so far for @realDonaldTrump last night - @guypbenson pic.twitter.com/1fodjDATUM