Cruz: Trump Should Debate Me, Not Whine About My Alliance With Kasich 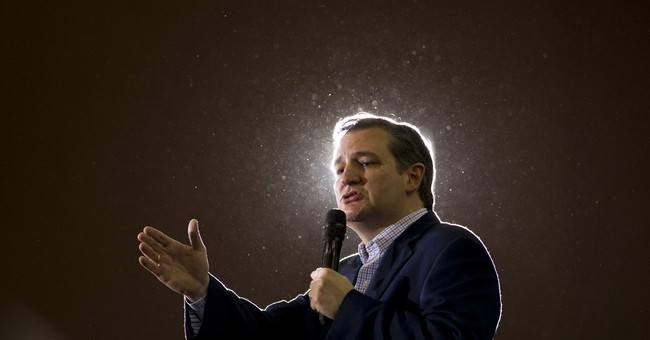 Ted Cruz held a media availability this afternoon, during which he commented on his tenuous, temporary, delegate-minded partnership with John Kasich, and needled GOP frontrunner Donald Trump over his unwillingness to debate the significantly winnowed Republican field:


A few thoughts: (1) It's been nearly a month-and-a-half since the last Republican debate, which took place before Marco Rubio departed the race. Hillary Clinton and Bernie Sanders squared off prior to last week's New York primary, exploring issues and differences in a nominating contest whose eventual outcome is far more certain than the Republicans' volatile process. Trump has declared victory after literally every debate (minus the one he skipped in a fit of pique, opting instead to raise money for veterans -- a huge chunk of which remains unaccounted for).  If he's such a tremendous debater who wields the "best words" to vanquish all of his opponents, he should be more than happy to debate anyone, anywhere, anytime. Especially since he's not yet on track to secure the nomination before a convention that could spell the demise of his disorganized campaign. He's complained that there have been too many people onstage in the past. Well, now's his chance to stand up and exchange ideas and share policy critiques with just two other candidates; his talk time would be higher than any previous debate of the cycle. He's vowed to become more presidential as the campaign wears on, and to learn more about policy specifics. A nationally-televised debate would present a major opportunity to show off his made-over approach.  Instead, Trump is ridiculing Cruz's call for additional debates, mocking Cruz's speaking style and boasting that he's able to neutralize Cruz's debating chops through frequent interruptions.  It's not an act.  It's who he is:


That presidential pivot will come any day now. Just you wait. Also, a quick aside: Since Cruz is resurrecting the "Donald Ducks" debate storyline, what ever happened to the Trump taxes issue? The "I'm being audited" excuse doesn't preclude him from releasing any number of years' worth of returns -- assuming that it's not a totally bogus explanation in the first place, of course. To verify his contention, Trump released a letter from his attorneys asserting that his taxes have been under "continuous examination," a slippery phrase that doesn't specifically confirm Trump's claim of annual unresolved audits dating back a dozen years. In light of renewed questions over where the money from Trump's much-hyped veterans charity event ended up, one would think the media would again demand to see his hidden tax returns -- about which there are all sorts of theories. Gosh, maybe their interest will be refocused on the issue if and when he nails down the GOP nomination. Trump has gone to extreme lengths to avoid surrendering those records, currently and in the past. Why? "Crooked" Hillary is under fire for her refusal to turn over transcripts from lucrative speeches she delivered to elite audiences. How can Trump prosecute the case against her secretive opacity when he's also hiding important records that presidential candidates typically make public?

(2) Cruz predicts that a contested convention is inevitable at this stage of the race, circling May 3's Indiana primary as a hugely consequential 'fork in the road.' "It is abundantly clear that nobody is getting to 1,237," Cruz says. "We are headed to a contested convention, and at a contested convention, Donald Trump is in real trouble. Why? Because he cannot earn the support of a majority of delegates elected by the people." He deflects a question about Trump's "desperation" taunts by suggesting that Trump is the truly desperate party in this scenario. That's...a real stretch. The only reason that Cruz and Kasich have teamed up is that Trump is the only remaining candidate with a prayer of hitting 1,237. If it were really "abundantly clear" that he couldn't get there, this tactical arrangement (a simple "allocation of resources" as Cruz downplays it) between the Texan and Ohioan wouldn't have happened. Cruz goes on to discuss Trump's "hard ceiling" (which happens to be true overall, but may not be the wisest choice to make ahead of tomorrow's likely Trump sweep in northeastern blue states) and lays it on thick about the importance of Indiana. Rubio did the same thing in advance of Florida, a must-win that he lost, then dropped out. Cruz had better hope that he pulls off the Hoosier upset, or else he'll have handed the Trump campaign and the media a lot of material to work with as they seek to declare the race over.

(3) Here's Cruz on the ripple effect of a Trump nomination, followed by an inevitable and decisive general election loss: "If Hillary wins, and wins in a landslide, that not only costs us the presidency. We lose the Senate. We may lose the House. We lose the Supreme Court for a generation. The bill of rights could be put into real jeopardy." He notes that current national (and swing state polls) show Clinton thumping Trump by double-digits. The brash billionaire is by far the least popular person running for president, which is remarkable in light of Clinton and Cruz's deep unpopularity. One rare bright spot for Trump fans is a new George Washington University poll showing a three-point race, the closest margin any survey has measured in months. The data does find Trump's unfavorable rating at a stratospheric 65 percent, which aligns with other polling on that measure. Mrs. Clinton's unfavorable number is an ugly 56 percent, while Cruz's negatives are at 55 percent -- bad, but nine and ten points better than Trump, respectively.  But he's only down three!  An outlier?  Sure looks like it:


Six of the last ten national polls find Clinton ahead by double-digits.  Even with the GWU survey factored into the algorithm, and after an unpleasant stretch for her, Hilary's RCP average lead over Trump is a formidable 8.5 percentage points.