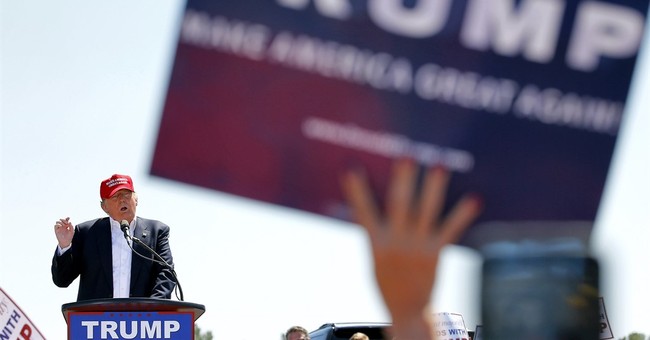 Via Real Clear Politics, an admonition from veteran politico and former Trump adviser Roger Stone -- who blows the whistle on state and local Republican officials moving behind the scenes to deny Donald Trump the GOP nomination if he shows up in Cleveland without a majority of delegates. Stone uses the term "trojan horse delegates" to describe nominating voters who may nominally be "for Trump," in that they're bound to him on the first convention ballot, but who are primed to bolt to another candidate if and when that first ballot fails to produce a majority-supported nominee. Pay close attention to what he says about the importance of the composition of the influential rules committee:


Notice how Stone suggests that Trump may need to pull off the political equivalent of an "inside straight" to win the requisite delegates to stave off a convention fight, making his wake-up call to fellow Trump supporters all the more urgent. Here's an excerpt from a column he wrote for Breitbart on the subject:

These hard-boiled pols know the nomination will be decided not on the first ballot, but in a series of procedural votes by the entire convention to adopt the rules of the convention as recommended by the Rules Committee and the seating of the delegates as recommended by the Credentials Committee. Those key committees are made up by two members from each state. The bosses have been quietly planting establishment regulars in these spots. The Trump camp has been inattentive to this process. The party kingmakers may have the votes to knee-cap Trump in the rules and credentials committee...The kingmakers have planned to steal the nod from Donald Trump...Republican state chairs are planting Trojan Horse delegates into slots won by Trump on the first ballot to vote with them on procedural votes to pass the Rules and Credentials Reports that will seal the “Big Steal.” This is going on in Texas, New York, Massachusetts, Michigan, Connecticut, North Dakota, and other states.

Though these “Trump” delegates will be bound by national and state rules to support Trump through the first ballot at the convention, they are free to vote against Trump’s interests on the adoption of Rules and the seating of delegates. It’s entirely plausible that a state could seat delegates pledged to support Donald Trump who have open affiliations with other candidates...The power brokers short-term game is clear: Stall Trump just short of the magic number of delegates needed to be nominated on the first ballot with the knowledge that many delegates bound on the first ballot by Trump primary and caucus victories are ringers who would be unbound on a second ballot.


In other words, the scramble is on to identify and lock in "Trump delegates" who may be forced to support him in an initial ballot setting, but who'd be inclined to work against his interests at every other turn.  By way of background, it's worth noting that Stone resigned from the Trump campaign citing irreconcilable differences last year (Trump falsely claimed that he'd fired stone, of course), but he remains a devoted surrogate and loyalist.  His loaded language about "the Big Steal," is quintessential Stone, designed to stoke the outrage of Trump supporters and to create an air of illegitimacy around a contested convention.  As a reminder, that outcome -- a multi-ballot convention, at which someone other than Trump is nominated by the party -- is only possible if voters decide to deny Trump the delegates he needs to clinch the crown.  What they ultimately choose to do will be determined over the coming weeks and months.  Note that Stone's primary criticism of Trump's camp here is that they've been "inattentive" to the details that could make or break Trump's chances.  This echoes his (rare) previous critiques of Team Trump, dinging them for costly organizational dysfunction in Iowa.  Trump claims to surround himself with -- cough, cough -- the very best people.  But how could a brilliant campaign put itself in the risky position of being outmaneuvered by a bunch of 'establishment' losers?  Based on Stone's analysis, it seems as though they're barely aware of this threat, let alone mobilizing to thwart it.  The clock is ticking.  Meanwhile, you know who is keenly aware of these dynamics and technicalities?  Ted Cruz, who has run an extremely well-organized campaign thus far:

At Cruz’s Houston headquarters, a six-person team overseen by political operatives, lawyers, and data analysts is effectively re-enacting the primary calendar, often with the aim of placing double agents in Trump slates. The ability to pick up new adherents during the state-convention phase invites Trump’s rivals to look anew at the map of his victories, based on the rules governing individual states. The 36 delegates Trump won in Alabama will be bound to him throughout the nominating process, but the 40 he won in Georgia are free to vote for whomever they choose after the first ballot. Georgia holds its county conventions on Saturday to select delegates for district conventions a month later—the week’s most important stop on the shadow-campaign trail. “We’re making resource allocations based upon stopping Donald Trump,” says Roe. “There’s several scenarios where he doesn’t make 1,237.”


That snippet comes from a fascinating, must-read Bloomberg piece published last week, which may well have induced Stone to amplify the alarm. The story runs through various scenarios about how voting may unfold between now and June, discusses state-level rules and episodes that could lead to future plot twists, cites historical examples of convention machinations, and reiterates the power of the rules and credentials committees:

If the primary calendar ends without any candidate emerging as its presumptive nominee, all those responsibilities will remain with RNC Chairman Reince Priebus. Thus far, Priebus has been docile toward Trump, who early on made being treated equitably by the national party a precondition for promising not to run as an independent in the general election. But if Trump doesn’t finish with a clear majority of delegates, Priebus will face immense pressure from party officials and donors to undermine him. Any challenge to a state’s results will be litigated before the Standing Committee on Contests, and, if successful, the matter will then be handed to a Convention Committee on Credentials to rule on what slate of delegates will be officially seated on the convention floor. Delegates bound to Trump against their personal preference get a free hand in these decisions; stacking the credentials committee will be their first real chance to cast a vote undermining his path to the nomination. Trump opponents will be aided by the fog of chaos that has surrounded his candidacy. Investigators deployed by an opponent’s campaign or super-PAC can seek out cases of “disorganization and confusion”—as Romney lawyers described it when they successfully challenged the results of a 2012 Maine convention taken over by Paul supporters—to knock out Trump slates nationwide.


I'd recommend reading the whole thing, and will leave you with this parting thought from Allahpundit: Are we sure that Cruz will be able to hold Trump under 1,237 and will have the will, political stamina and resources to push all the way to July? Either way, lots of drama left before the general, folks.  Speaking of which:

NYT/CBS latest to find large electability gap at this stage:

Trump down 12 to Hillary.