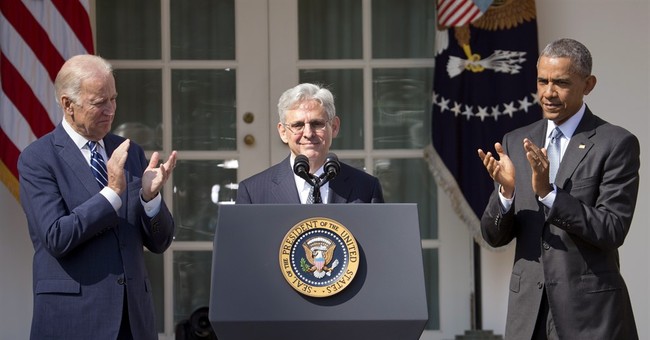 As regular readers are well aware, I've been on board with Senate Republicans' "no hearings, no vote" approach ever since Justice Scalia died last month. There is strong precedent for withholding consent from a lame duck president's Supreme Court selection in an election year -- just ask Joe Biden, Harry Reid and Chuck Schumer. The American people have already begun the process of choosing the next president; holding Scalia's seat open until after voters render their electoral judgment is 100 percent defensible, both practically and on principle. Within minutes of President Obama announcing his nomination of DC Circuit appeals judge Merrick Garland to the Court, GOP Senate leaders reaffirmed their commitment to waiting until after the election season to fill the current vacancy. Mitch McConnell and Chuck Grassley deserve credit for holding the line, as does House Speaker Paul Ryan, who released a statement fortifying their position (quote: "this has never been about who the nominee is. It is about a basic principle").

All that being said, today's move is a shrewd play by Obama, who defied expectations by choosing someone who can somewhat reasonably be described as a compromise nominee.  It's especially cunning that he chose to drop this pick at a moment that finds the Republican Party roiled by dysfunction, convulsions and deep divisions. Many of us, myself included, expected Obama to maintain his pattern of identity politics fetishism and hyper-partisanship by picking a hardcore Leftist, opposition to whom could be shamelessly demagogued along on and/or gender lines. Instead, he's chosen 63-year-old white male with an impeccable pedigree and center-Left establishmentarian credentials.  To be clear, the notion that Garland is a centrist in the mold of Sandra Day O'Connor is a fiction; he'd be a fairly reliable liberal vote on most issues and conservatives are already mining and decrying some serious red flags in his judicial history. But he's also amassed a mixed record on other questions, he's cultivated a reputation for preferring to rule on narrow grounds (which could of course change once he's ensconced on the Supreme Court), and he's getting panned by many on the activist Left who were demanding a hardened "progressive:"


Lefties have been rooting for a young uber-liberal who would shift the Court ideologically and generationally. Garland's confirmation would give them a partial win on just one of those two counts. His age is part of his "compromise" appeal, it seems. While sixty-something isn't terribly old by any stretch, it's unlikely that a Justice Garland would shape jurisprudence at the highest level for three or four decades the way a younger appointee could.  And therein lies the quandary. Republican Senators are leaning on principle and precedent, sure, but they're also placing a political bet that 2016 will end in electoral victory.  If the GOP wins the White House in November, the Senate will kill off Garland's nomination for good and wait for the new president to send over a nominee in the mold of Scalia.  Before we proceed, three caveats on this point: (1) There may be a Democratic Senate starting in 2017, independent of the presidential results, and that hypothetical outcome might impact the next president's selection calculus. (2) Even if Republicans retain their upper chamber majority, they'd need to be prepared to encounter a Democratic filibuster. (3) While, say, President Cruz's pick would be superb, President Trump's pick would be a total wild card in light of his penchant for nepotism, unstable ideology and -- shall we say -- questionable brain trust.

But what if Hillary wins?  There's a very real chance that happens -- especially if Trump's the Republican nominee, for reasons we've outlined on several occasions.  Then what?  Then the lame duck Senate either confirms Garland over the waning days of the session, or the new (almost certainly Democratic) Senate takes up President Hillary's immediate nominee, who could very well be a much younger, much more ideological anti-Scalia.  The pressure from the Left for her to go that route would be immense, particularly after she inevitably argues that she's secured a governing mandate.  If and when she picks an extremist, Republican opposition would probably fall on deaf ears.  The GOP would have just kept the seat open for nearly a year, after all.  They had their chance, we let the voters decide like they demanded, and now it's time to end the impasse.  Even if the GOP could muster a filibuster, Schumer and company -- eager to exact revenge on Obama's behalf -- would finish the job of nuking the judicial filibuster.  Hello, Justice Liu, or some such zealot.  In light of these potential eventualities, Allahpundit reads the tea leaves and predicts that Garland will be confirmed sooner or later:

At a minimum, McConnell won’t move on it until Trump’s nomination is assured; like I said up top, there’s too much risk of a voter backlash in the primaries to do it before then. He could move on it this summer, after Trump has clinched. Republican voters would still be outraged, but at that point the GOP establishment will quietly be working hand in glove with Trump to get him elected. If angry GOPers decide to “punish” McConnell by going to the polls for Trump in November, so much the better for the party. (It may even convince some #NeverTrumpers to give Trump, the supposed scourge of Washington Republicans, a second look.) The big wrinkle, obviously, is that angry Republican voters will also punish any GOP senator who’s up for reelection if they support McConnell’s plan to confirm Garland. But that’s no huge obstacle to confirmation: With 46 Democrats prepared to vote yes, McConnell would need just 14 Republicans to break a filibuster. Between blue-staters like Mark Kirk and stalwart centrists like Lindsey Graham, he should be able to find the votes. And if the whole thing proves simply too hot to handle before the election, there’s always the option of confirming Garland during the lame-duck session.


AP reasons that even if Hillary wins, she and Obama wouldn't be disloyal and partisan enough to pull the rug out from under Garland just to install a true blue left-winger once their political hand is strengthened, but I wouldn't be so sure.  Bottom line: Senate Republicans are standing on principle and taking a gamble here.  In the at least plausible event that voters deliver an unfavorable verdict this fall, they may come to regret rolling the dice, even if doing so may appear to be the only politically-tenable play in the current environment.