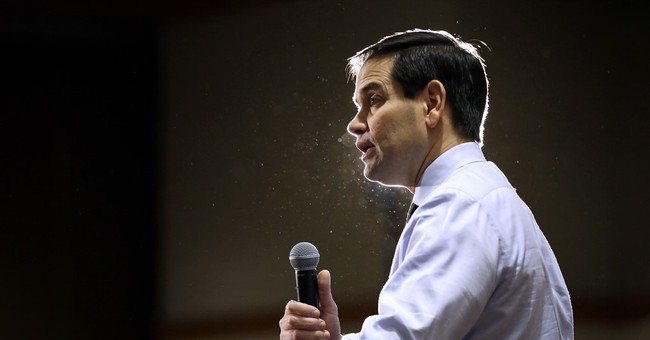 Noteworthy, for two big reasons: First, as we touched upon yesterday, Rush seems to be inching away from the Trump boosterism I lamented a few months ago.  For what it's worth, fellow radio giant Mark Levin tossed Trump (back) overboard after he started attacking Ted Cruz from the left weeks ago, and now Limbaugh is hitting Trump in a similar fashion -- arguing that Trump lost Iowa because he sounded "like a liberal Democrat" in attacking Cruz.  He's right.  The celebrity billionaire mimicked his "former" party's tactics and ideology by demagoguing Cruz's conservative positions on issues like ethanol subsidies and healthcare. It's worth noting that this isn't the first time Trump has done so this cycle, either; he also repeatedly bashed Scott Walker's sterling conservative record with debunked Democratic talking points. Second, and more importantly, this pro-Rubio testimonial from the most recognizable conservative media voice in America could very well prove more useful to Rubio than any of the formal endorsements the various campaigns have rolled out in recent days. Listen, then read on for some analysis:


"I don't like this idea that Marco Rubio is all of a sudden being labeled as an establishment candidate. I know that Rubio's got the baggage of that 'gang of eight' bill...I understand that. But I'm here to -- Marco Rubio is no moderate Republican centrist...I'm just telling you, I don't see Marco Rubio as anything other than a legitimate, full-throated conservative. Nobody's pure and nobody is ever free of making mistakes. I know Senator Rubio...I don't like his idea that we're all of a sudden going to make Rubio the establishment bad guy, as though Rubio is no different from the McCains, and the Bob Doles, and the Romneys, and the others that have come along and been nominated by the establishment. He just isn't."


Rush also spoke glowingly of Ted Cruz, so this wasn't a formal endorsement by any means. But it was a bestowal of a credibility-fortifying blessing, falling like manna from heaven for the Rubio campaign ahead of what is going to be a bruising few weeks.  Now that Rubio's momentum vaulted him to a surprisingly strong finish in Iowa, driven by late deciders and voters who value electability, his campaign is explicitly framing the GOP nominating contest as a three-man race.  The other two candidates in that equation obviously view Rubio as the competition, whereas everyone who's excluded from that club is eager to disrupt that narrative from taking root, which would pose an existential threat to their candidacies.  For those reasons, I made this point on Fox last night:

.@guypbenson on #GOPDebate: “Every single person on that stage… has incentive to come after @marcorubio.” #Greta pic.twitter.com/SowyYnIOSv


The incoming fire is going to be hot and ;heavy at Saturday's ABC News debate, potentially complicating Rubio's efforts to position himself as the candidate best situated to unite the party. Several, if not all, of the contenders in the "establishment lane" realize they may not survive another show of force from the Florida Senator, so their long knives will be out and sharpened.  On the other end of the spectrum, Ted Cruz will continue to cast Rubio as weak, compromised, and part of the establishment's "Washington cartel."  Yesterday afternoon's monologue from Limbaugh hands Rubio a powerful shield against that line of attack.  Don't be surprised to see Rush's assessment paraphrased by its benefactor during the debate, or featured in television and radio ads in places like South Carolina.  I'll leave you with Mark Levin blasting the media's breathless coverage of Rubio's third-place finish, as impressive and robust as it was, at the expense of discussing Monday night's actual victor.  Rubio over-performed his polls and exceeded expectations in a big way.  But Cruz over-performed the polls, beat the ethanol lobby, overcame birther smears and, you know, won.  As a bonus, here's Levin lighting up Donald Trump's pro-government-healthcare answer on ABC News' This Week last weekend -- which echoed a previous response on 60 Minutes and aligns rather closely with Trump's recent praise of single-payer healthcare: