Hillary: I'm Not Lying, So The Benghazi Families Must Be 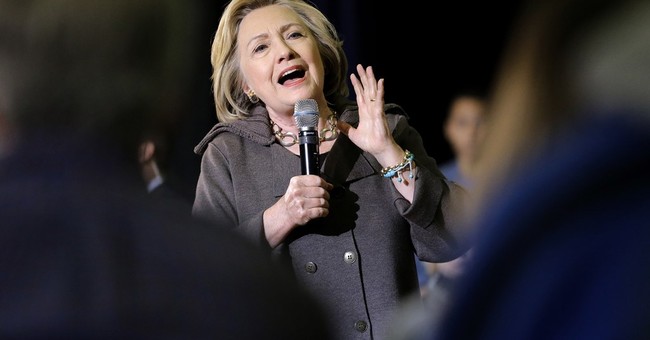 According to four separate family members of the Americans slain in the September 11, 2012 terrorist assault on the US diplomatic compound in Benghazi, then-Secretary of State Hillary Clinton privately blamed the attack on an online anti-Islam video. She did so days after she knew, according to her own words, that the deadly raid "had nothing to with the film. It was a planned attack -- not a protest." The Benghazi families' memories are consistent and specific, with one account of the interaction having been recorded in a journal at the time:


Asked point blank whether these accounts are true last month, Hillary said "no," without a substantive follow-up.  She doubled down when pressed further in New Hampshire over the holidays:

Sun Columnist Tom McLaughlin said she told an Egyptian diplomat the Benghazi attack was planned and not a protest but that she told family members of the deceased that the attack was the result of a demonstration. He said she then told George Stephanopoulos that she didn't tell the families the attack was a demonstration about a film. "Somebody is lying," said McLaughlin."Who is it? Clinton replied, "Not me, that's all I can tell you." At the time, Clinton said, everyone was emotionally distraught. She said some families didn't know their sons were working for the CIA or were in Benghazi. Clinton said the information she had about the attack was from the intelligence community.


Hillary Clinton, a confirmed liar who's deeply distrusted by voters, claims that all four of these grieving relatives aren't telling the truth about what she said to them on September 14 -- back when the White House was still peddling the video myth in public.  Indeed, Hillary included a heated reference to the film in her speech at the casket ceremony that day, in the context of discussing the broader upheaval across the region.  Somebody is lying.  Hillary asserts that it isn't her, leaving only one, highly implausible option.  She tries to soften her clear implication that Tyrone Woods' father, Sam Smith's mother and uncle, and Glen Doherty's sister are liars by suggesting that perhaps they were just too "emotionally distraught" to summon accurate recollections.  This is insulting.  Of course they were very upset, but the idea that they all misunderstood her in the same exact way -- and that one of them took inaccurate contemporaneous notes about the interaction -- is ludicrous.  The little nugget that some of them didn't know that their murdered relatives had been working on behalf of the CIA is pure, cynical misdirection; that information was classified at the time, and had zero bearing on whether they may have been confused about what she told them face-to-face at a private meeting.  Lastly, Clinton's line that all of her information at the time came from the intelligence community is also flat-out wrong.  The former acting director of the CIA has testified under oath that the US intelligence community never tied the Benghazi attacks to the Internet video.  And former CIA director David Petraeus has stated that the US government ascertained that the Benghazi massacre was a coordinated act of terrorism "almost immediately."  State Department documents and Hillary's own virtual paper trail affirm this.  The Secretary of State understood the truth, with clarity.  She shared it with her own daughter and with foreign diplomats, while serving up a fiction to the American people, including heartbroken family members of the deceased.  I'll leave you with word of another Benghazi document dump that you may have missed on New Year's Eve:


Remember, this tranche of emails was only released due to a court order (see update), along with thousands of additional documents Hillary Clinton's State Department never turned over to other Congressional committees that probed the terrorist attack. The Obama administration claimed that all relevant information had been provided years ago, and Democrats have assailed the current investigation as redundant and partisan -- yet the Benghazi Select Committee is just now receiving these emails from Patrick Kennedy, a high-ranking Clinton subordinate at the center of this and several other controversies. In fact, State officials are saying that are so many previously-unreleased, relevant documents in need of review that they were unable to fully comply with the federal judge's orders on time.

UPDATE - Benghazi committee press secretary Matt Wolking reaches out with a small but significant correction: "It is not correct that the documents we received from the State Dept on NYE were 'only released due to a court order.' The Benghazi Committee’s requests for government officials’ emails and documents related to Benghazi and Libya are totally separate from the FOIA lawsuits filed by journalists and others that led to the court order for Clinton’s emails. While some of Clinton’s Benghazi and Libya-related emails have been redacted and released by State under the FOIA ruling, they produced them to us earlier in unredacted form," he writes. In other words, the latest (still incomplete) batch of Hillary's emails that were released under court order on December 31st are separate and apart from these Patrick Kennedy emails, which the committee requested. The State Department chose to hand the latter group of documents over on New Year's Eve, whereas that was the court-mandated deadline for the most recent tranche of Hillary correspondence.