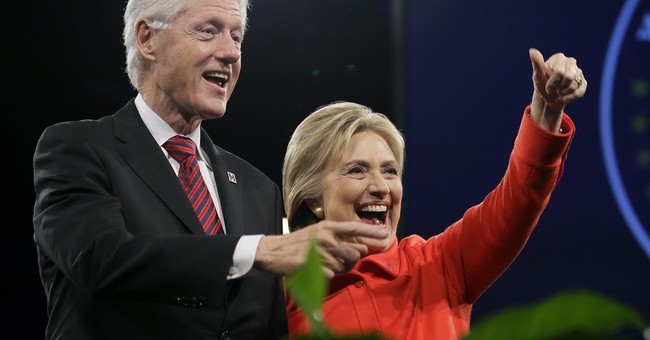 Following Donald Trump's inoffensive but unwise criticisms of Hillary Clinton -- the "schlonged" affair and the bathroom break cracks -- Clinton's allies circled the wagons with entirely predictable cries of sexism. Trump fired back with a warning: If treatment of women is an issue Hillary's campaign plans to raise throughout the campaign, the billionaire won't be shy about raising Bill Clinton's long history of sexual impropriety and alleged abuse. Is that fair game? Although candidates' families are typically considered off-limits (tell that to Ann Romney or Ted Cruz's daughters), Bill Clinton is an explicitly political figure. His wife's campaign plans to deploy the 42nd president as a top surrogate on her behalf, so it's fair to say that criticizing him is legitimate. That being said, I made the case on Fox News' Outnumbered that revisiting all that 90's baggage could ultimately redound to Hillary's benefit -- engendering public sympathy for a deeply unsympathetic politician, and playing into her strategy of grievance and victimhood:


As I note in the clip, if Republicans want to highlight Mrs. Clinton's "war on women" hypocrisy, there is plenty of other material to work with. And to the extent that Republicans decide to raise Bill's history in the context of the campaign, perhaps the strongest angle is to call Hillary out over her complicity in smearing her husband's accusers -- especially as she panders to the Left's "rape culture" alarmists. And speaking of unhealthy sexual cultures for women, I'll leave you with this:

The collapse of liberal consulting firm Fizgibbon Media last week stunned many in the progressive movement, but the reasons behind it didn’t surprise a tragically large number of women in the field. Founder Trevor Fitzgibbon — a Big Name in the progressive communications world — turns out to have been a “serial sexual harasser,” as a former Fitzgibbon employee put it. More than harrassment, too, since his behavior included outright assault in some cases. What a creep! But not an isolated creep. In fact, many women in the progressive activist space are coming out with similar stories of harassment from colleagues, bosses, clients, members of Congress and other men in positions of power. But few are willing to use their names so far, out of the obvious fear of retaliation, subtle or otherwise. Enter Strength In Numbers, a Tumblr blog founded by two people close to Epolitics.com: Beth Becker and Sarah Burris. They’ve created a public online space where women (and men!) in the movement can tell their stories anonymously, and the first posts are sobering. The editors are now sorting through DOZENS of similar submissions to remove personally identifiable information, so expect to see many more accounts of profoundly wrong behavior soon. This. Has. To. Stop. Harassment is a bad thing anywhere, but in this case, it’s a deep betrayal of the values of equality and dignity that underly liberal philosophy and the the progressive movement.


Odd that the press hasn't been running hard with this story, isn't it?