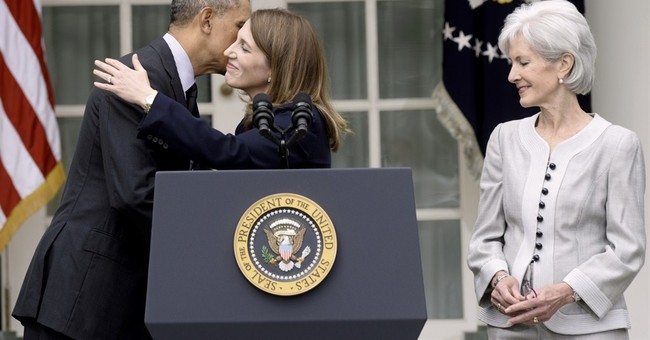 A good catch by Megan McArdle, who astutely notes that the administration's announced average premium hikes for so-called "benchmark" Obamacare plans only tells part of the 'rising costs' story.  Utlizing data provided by a major healthcare consultant, McArdle demonstrates that rates are spiking even higher among Obamacare's "most affordable" plans:


McArdle goes on to highlight the fact that health care risk pools under Obamacare are older and sicker than projected, which creates an adverse selection problem.  She stops well short of declaring the beginning of a dreaded "death spiral," but she says policy analysts are watching the law's many "moving parts" with great interest.  The Associated Press is out with a story this week headlined, "higher premiums likely to slow sign-ups in law's third year." This isn't news to our readers, as we've reported that even the administration is tacitly conceding that sticker shock is acting as an enrollment deterrent.  The AP report's opening paragraphs read like a press release for the law, celebrating its improved website (two years after implementation, and still working through bugs) and reductions in the uninsured rate (achieved by legally requiring people to buy a product).  Then comes the less pleasant news:

Supporters may feel they're running to stay in place, rather than taking a victory lap during the president's last full year in office...The fate of the Affordable Care Act is very much in the hands of the next president. A weak sign-up season could embolden opponents who are so far unwilling to relent...Costs are going up on the private, taxpayer-subsidized coverage sold through HealthCare.gov and state insurance exchanges, and many of the more than 10 million eligible uninsured Americans are skeptics. They tend to be younger people on tight budgets, with other priorities for spending their money.


Critics are "unwilling to relent" because the law is actively hurting people, driving up prices, and violating virtually every major promise on which it was sold.  Many of the eligible uninsured are "skeptics" because they can't afford the rates and out-of-pocket costs.  Also, opposition to the law has worked out pretty well politically -- almost as if the American people have been trying to say something:


Meanwhile, an element of Obamacare that was set up as an expensive gesture to the Left continues to implode:

More than half of the health care law's nonprofit insurance co-ops are closing, the Obama administration said Tuesday even as it defended the troubled alternative to mega-insurers. Mandy Cohen, a senior official with the Health and Human Services Department, told lawmakers at a hearing that 12 of the nonprofit co-ops will not be selling health law coverage next year. There were 23 co-ops before a cascade of solvency concerns prompted action from state regulators.