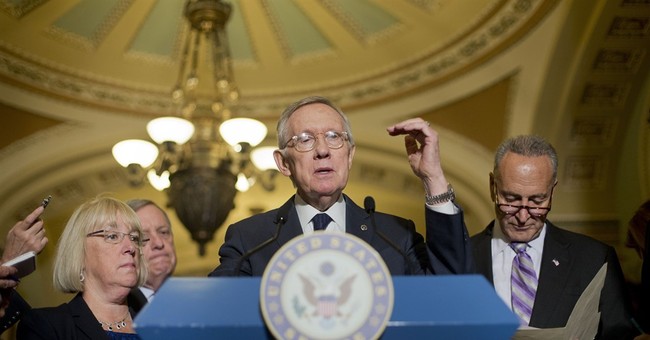 If and when Washington is pushed to the brink of another government shutdown in December, as the just-passed stopgap funding measures approach their expiration, we'll inevitably hear a lot of sound and fury from Democrats about "extreme" Republicans holding crucial federal spending "hostage" in pursuit of an ideological agenda. Setting aside arguments over the wisdom and efficacy of using a shutdown threat as political leverage (which was attempted and failed in 2013), Senate Democrats are currently engaged in precisely this sort of conduct, for reasons that aren't likely to impress many voters.  Yesterday, Harry Reid and friends filibustered a spending bill that would fund the VA -- which Democrats routinely claim is underfunded, as a means of explaining away the department's systemic, deadly corruption and concealing the disastrous failure of government-run healthcare:

Democrats Thursday blocked the Senate from turning to a $78 billion spending measure for the Department of Veterans Affairs and military base construction. They and the White House argue that it's part of an overall GOP budget framework that shortchanges spending on other domestic programs...The White House has issued blanket veto threats against every spending bill, saying they shortchange domestic programs while exempting the Pentagon from the return of automatic spending curbs that would otherwise freeze its budget. Republicans note that many Democrats supported the bills when they were considered by the Appropriations Committee.


The Obama White House, ever eager to delegitimize Republican opposition via vitriolic smears, is running point on this "hostage taking" endeavor.  And Democrats are dutifully refusing to even permit a vote on a spending bill many of them praised and supported in committee.  Why?  Because Obama objects to GOP spending priorities, which would boost defense appropriations while enforcing caps on other domestic and discretionary spending.  Republicans won a sweeping electoral victory last year, promising voters that they'd control federal spending and strengthen America's military.  They now run both houses of Congress and have passed budgets that reflect their priorities.  Now that the GOP majorities are attempting to implement those priorities, spendthrift Democrats are resorting to filibusters and veto threats to try to force Republicans to agree to hike federal spending across the board.  To this end, they're willing to obstruct votes to fund veterans benefits as a means of coercing their opponents into doing something they campaigned against.  Republicans have responded by raising some of these points in speeches and press availabilities, but as I argued on the Iran deal vote, impactful messaging requires more aggressive action.  The Federalist's Ben Domenech recalls a very similar recent scenario in which the GOP also declined to apply intense pressure to recalcitrant Democrats:

It goes back to when Democrats decided in June to filibuster the Defense appropriations bill, as part of their strategy to filibuster any and all appropriations bills until Republicans were willing to renegotiate the sequester. This was a golden opportunity for McConnell: Democrats weren’t filibustering just any bill, they were filibustering a bill that does things like, well, pay the troops. It was an extremely aggressive and perhaps unsustainable step. Democrats took it only because they were confident McConnell would gripe about it, but ultimately cave. To understand the missed opportunity here, consider what could have happened if McConnell was not so dedicated to keeping the Senate “open for business” and working with the president on other priorities. Imagine instead what would have happened if McConnell saw the opportunity to break Reid and isolate the president on spending. He could have canceled all other Senate business, canceled the recesses, and forced the Democrats to block the Defense appropriations bill every 72 hours until September 30th. No weekends off, no holidays, keeping 75 year old men up all night for days, allowing no personal comforts until the filibuster is broken. In stark comparison to the media’s willingness to hide the ball on Planned Parenthood, Republicans would have been gifted with three months of messaging on “Democrats are so angry at the American people for taking away their majority, they are refusing to pay the troops.” Instead, McConnell did what Democrats expected him to do. He griped about it, moved on, and looked to a continuing resolution. He extracted no price at all from Reid and his caucus for shutting down the budget process.


Why would Democrats alter or abandon their ruthless tactics if they're confident Republicans will ultimately decline to do what's necessary to truly make them sweat?  Holding the line on spending caps is one of the biggest tangible accomplishments of the post-2010 Republican Party.  They've since expanded their House majority and reclaimed the Senate, thanks to voters whose rejection of Obama's policies was record-breaking in scale.  Yet Democrats are intent on increasing government spending anyway; aside from protecting unfettered abortion, this is their party's raison d'être.  In other political fights, Republicans are hamstrung by their inability to force the president to sign bills that unravel his agenda.  In this case, however, the GOP controls the process and has existing precedent and inertia on its side.  Force the Democrats to explain, over and over again, why they won't even allow votes on legislation to pay the troops and fund the VA.  Let them tell the American people that they're refusing to pay our military and care for our veterans because their bigger priority is spending more tax dollars on big government programs -- and that they're pursuing that goal by using the troops as leverage.  See how that flies.  If Republicans break Democrats on defense spending, they could proceed with additional funding bills that maintain the caps negotiated in bipartisan agreements, rooted in The Obama Sequester.  Status quo bills, in other words.  If Democrats balk, mounting additional filibusters or issuing vetoes, a potential shutdown could be laid at their feet.  The Republican script:

"We've funded the troops and our veterans, in accordance with our campaign promises.  Now we're trying to fund the rest of the government at agreed-upon levels, adhering to our pledge to rein in spending and control President Obama's debt-increasing spending binge.  Democrats now say that if we won't let them make government even bigger, they'll shut the government down.  That's irresponsible in an era of an $18 trillion national debt."


Conservative voters want a fight. This is a winnable fight -- and the short-term continuing resolution just bought GOP leaders several months in which to wage it. Victory requires playing hardball and standing unified in both purpose and message. Are Congressional Republicans capable of such things?