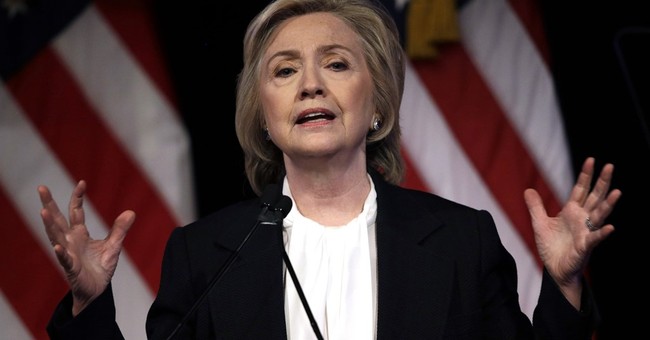 Two inspectors general have asked the Justice Department to open a criminal investigation into whether Hillary Rodham Clinton mishandled sensitive government information on a private email account she used as secretary of state, senior government officials said Thursday. The request follows an assessment in a June 29 memo by the inspectors general for the State Department and the intelligence agencies that Mrs. Clinton’s private account contained “hundreds of potentially classified emails.” The memo was written to Patrick F. Kennedy, the under secretary of state for management. It is not clear if any of the information in the emails was marked as classified by the State Department when Mrs. Clinton sent or received them. But since her use of a private email account for official State Department business was revealed in March, she has repeatedly said that she had no classified information on the account.

Well, she's "repeatedly said" a lot of things regarding her improper email arrangement, many of which are verifiably false. I've long argued that the national security risk of her woefully under-secured server was the most troubling aspect of this story, with various experts having concluded that her messages were almost certainly penetrated by foreign governments and intelligence agencies. Mrs. Clinton claims she had no classified information on the account. At least two Inspectors General offices appear to have questions about the veracity of that claim.  Keep reading below, or just think about it for a moment: She used this server for all of her business, including public business as America's top diplomat. Given how reckless she's been, and her utter disregard for the rules, how likely is it that she scrupulously avoided exchanging any classified material through that server -- the whole ostensible (and debunked) purpose of which was having the convenience of streamlining all correspondence onto one device?  Remember, Clinton's team unilaterally deleted more than 30,000 emails from her server with no independent oversight.  We know for a fact that they destroyed non-personal, work-related emails, counter to her claims.  Given all of this evidence, these nonpartisan watchdogs have determined that it's high time for a full-blown criminal investigation into the matter.  More from the Times:

The department is now reviewing some 55,000 pages of emails. A first batch of 3,000 pages was made public on June 30. In the course of the email review, State Department officials determined that some information in the messages should be retroactively classified. In the 3,000 pages that were released, for example, portions of two dozen emails were redacted because they were upgraded to “classified status." But none of those were marked as classified at the time Mrs. Clinton handled them. In a second memo to Mr. Kennedy, sent on July 17, the inspectors general said that at least one email made public by the State Department contained classified information. The inspectors general did not identify the email or reveal its substance...The Justice Department has not decided if it will open an investigation, senior officials said. A spokesman for Mrs. Clinton’s campaign declined to comment.

Of course he did.  We now await the Obama administration's decision on whether or not to open a criminal probe into the co-author of Obama's foreign policy -- not to mention their party's presumptive presidential nominee.  I recommend against holding one's breath.  Still, this can't easily be shrugged off and ignored by Team Hillary...nor danced around by the candidate, whenever she deigns to give another media interview.  Between the ugly swing state poll and now this, it's been a rough week for the Clinton campaign.  How might the words "criminal investigation" impact, say, these numbers?

And what happens if an investigation determines that her "no classified materials" assertion was just another lie?

Matt Vespa
FBI’s Top Liar Just Got His Perks Back
Katie Pavlich
There Was a Mass Casualty Event in Norway...And It Was a Throwback to Medieval Times
Matt Vespa
Oh, So That’s What Pete Buttigieg Has Been Doing
Katie Pavlich
CARTOONS | Chip Bok
View Cartoon
Most Popular