WH: Why Yes, Obama's ISIS Strategy Has Been An Overall Success 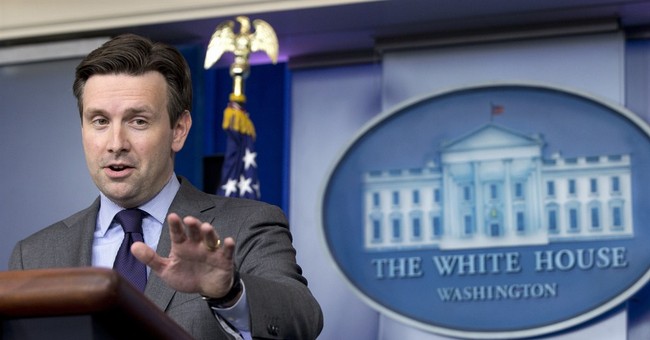 
Karl: "Would you say that, overall, the strategy's been a success?"

Earnest on Ramadi: "Are we going to light our hair on fire every time there's a setback?"


The chilling reality of the fall of Ramadi, via the New Yorker:


Over the weekend, as ISIS fighters rolled into Ramadi, the capital of Iraq’s Anbar Province, one of them posted a video to the Internet. It was shot from a recently captured Iraqi police station, and showed box after box of American mortar shells and bullets that appeared shiny and new. Several Humvees, apparently not long out of the packing crates, sat abandoned nearby. “This is how we get our weapons,” the narrator said in Arabic. “The Iraqi officials beg the Americans for weapons, and then they leave them here for us.” Depressing, isn’t it? The fall of Ramadi is not just a bleak symbolic defeat for the Iraqi government and its allies, including the United States. During the nearly nine years that American troops fought in Iraq, Anbar Province was one of the most lethal places for American soldiers and Marines; some thirteen hundred died there. In 2008, though, when the Americans finally handed the city back to the Iraqi Army, many of the American Marines present at the ceremony there were not even carrying weapons. After so much bloodshed, Ramadi had become one of the safest cities in the country. All of that is gone now. Along with the western half of Mosul, which ISIS captured last summer, Ramadi represents the second pillar of the group’s Iraqi domain...

And then there is the loss of Ramadi itself. Without it, most of Anbar’s populated areas are now in ISIS’s hands. (Fallujah has been under ISIS control since last year.) The big airbase at Al Assad, which was the center for much of the Iraqi Army’s (and American) operations, is now cut off in the desert. “The fall of Ramadi is a game-changer,” Jessica Lewis McFate, the head of research at the Institute for the Study of War, which released a detailed report on the war just before Ramadi’s fall, said. “Whatever confidence remained the Iraqi security forces is likely to collapse.”


And here are the Washington Post's editors, "lighting their hair on fire," as the White House might derisively characterize the concerns raised in this house editorial:

IT HAS been apparent for some time that the United States lacks a strategy to fulfill President Obama’s pledge to “degrade and ultimately destroy” the Islamic State since it has no plan to root out the terrorists’ base in Syria. There was hope, though, that Mr. Obama’s half-measures might be enough to blunt the Islamic State’s advances in Iraq, leaving the Syria problem for the next U.S. president. With the stunning fall of Ramadi on Sunday, even that modest optimism is questionable... U.S. airstrikes late last week proved powerless to block a sophisticated Islamic State offensive to capture Ramadi, the capital of Anbar province 80 miles west of Baghdad. Once again, the Islamist terrorists are slaughtering captives and sending civilians fleeing in fear. Once again, they have seized U.S. military equipment, including about 30 vehicles the government sent into Ramadi the day before its fall. Once again, in the absence of more intensive help from the United States, the Iraqi government is turning to Shiite militia and the Iranian armed forces that support them.


If this constitutes "overall success," one shudders to envisage what failure might look like.  This 'JV squad' is on the march, scoring major victories -- both literal and symbolic.  ISIS is also expanding its footprint within the chaotic, failed state of Libya, yet another consequence of the disastrous Obama/Hillary/Kerry foreign policy.  The administration was briefed on the burgeoning threat of ISIS, with specificity over many months, but couldn't be bothered to develop a strategy to combat the barbaric terrorist army.  Domestic political narratives were far too important, which also explains Obama's historic failure to achieve a status of forces agreement that could have safeguarded many of the extremely hard-fought gains in Iraq and contained ISIS' outbreak to Syria.  But here we are today, and the White House would like you to stop worrying about it, thank you very much.