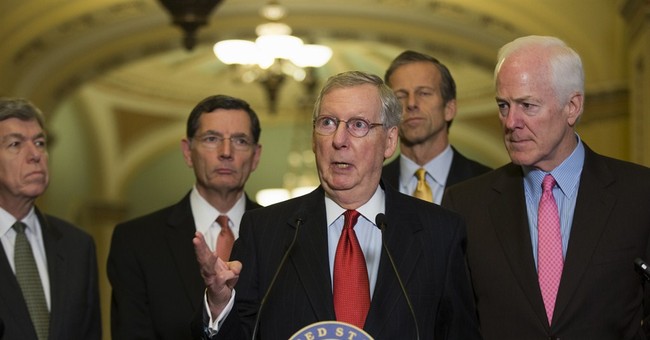 UPDATE: The Associated Press reports a deal has been reached, details pending:

Via John McCormack, the GOP held firm on Hyde Amendment protections, meaning that Democrats blinked -- which may explain some of Reid's crankiness noted in the original post:

After weeks of obstruction, Senate Democrats may finally end their filibuster of a bill to combat sex trafficking, clearing the way for a confirmation vote on Attorney General nominee Loretta Lynch. The bipartisan legislation ran into trouble in March, when Democrats suddenly turned against a bill many of them had co-sponsored and supported in committee. Why? Because special interest groups decided to mount a fight over routine language in the bill barring taxpayer funding of abortion. Every single excuse and argument Democrats have offered on this front has been debunked, and minority leadership has objected to a vote on stripping out the "objectionable" language -- they knew they'd lose; the decades-old moratorium on taxpayer-funded abortion is broadly supported by the public. Now, finally, the upper chamber appears to be approaching a compromise that would allow Democrats to extricate themselves from their radical corner step out of the way of overwhelming passage:

The Senate is nearing a resolution to a monthlong dispute that’s halted a human trafficking bill and confirmation of attorney general nominee Loretta Lynch, even as Minority Leader Harry Reid on Monday resumed his rhetorical assault on Republicans for the delay. Top sources in both parties — and even Reid himself — said negotiators had made headway toward a compromise on abortion language included in the sex trafficking bill that Democrats have strongly opposed. Senate Majority Leader Mitch McConnell (R-Ky.) has vowed that the trafficking bill must be completed before the Senate votes to confirm Lynch...“We’re getting closer, but we’re not quite done yet,” said Senate Majority Whip John Cornyn (R-Texas), who wrote the trafficking bill and is working closely with Reid on a way forward. “The negotiations are ongoing and somewhat delicate.”...“There seems to be a path forward, but there is no guarantee,” Reid said. “Every day that passes without a newly confirmed attorney general proves once and again Republicans can’t lead and they certainly can’t govern.” A GOP aide was more bullish than Reid: “I’m pretty optimistic we’re going to get to where we need to be on this.”


Harry Reid never ceases to be the nastiest partisan in the room, a role he'll evidently relish until his career is at last consigned to the ash heap of history in January 2017.  Reid cynically heaped praise upon Jeb Bush, a man he called a "loser" not long ago, for responding to a question that the Senate ought to confirm Lynch, whose nomination Mitch McConnell has tied to a Democratic stand-down on their radical abortion stance:

“No wonder Jeb Bush stood up for Lynch in New Hampshire,” Reid said Monday. “Bush didn’t just show grace in doing that. He also showed more common sense than his brother showed in eight years as president of the United States. Jeb Bush has to know that Sen. Mitch McConnell hijacking this process does him absolutely no good.”


One can't imagine McConnell is particularly interested in advice on functional leadership and Republicans' best interests from Harry Reid, of all people. The decision to stall Loretta Lynch -- whose nomination is fraught with controversy over the president's unlawful power grab on immigration -- has allowed the GOP to again register its strong opposition to that executive order, and to exert leverage on what should be a nonpartisan human trafficking bill. The American people afforded McConnell this leverage when voters sent nine new Republicans to the Senate in 2014. I recently discussed the political dynamics of the Lynch/immigration/trafficking fight on Fox News:


The agreement to end this standoff isn't finalized yet.  Democrats must not be rewarded for their extreme, dishonest obstructionism; Republicans cannot accept any solution that serves to undermine longstanding Hyde Amendment abortion precedent.