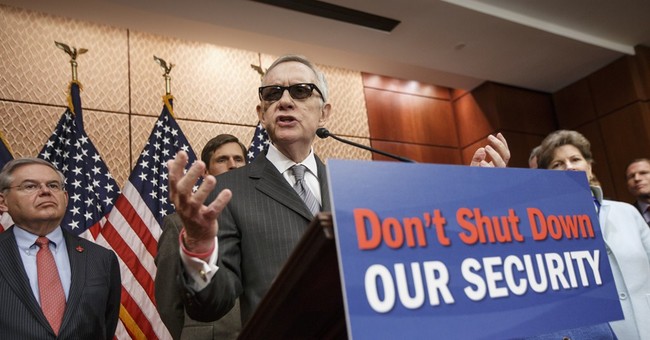 Now it's time for the depressing denouement of Congress' battle over Homeland Security funding and President Obama's unlawful immigration edicts.  To recap, House Republicans passed a bill in January that fully funded DHS, with the narrow exception of money for the amnesty orders.  Obama's most recent decree is deeply unpopular with the public, was repeatedly dismissed as illegal by Obama in the recent past, and has been blocked by a federal judge.  Senate Democrats filibustered the introduction of the House-passed legislation on four separate occasions, preventing it from being debated or amended.  Several of these Democrats had previously feigned concern over the president's power grab, yet they unanimously filibustered DHS funding to protect it.  With a partial agency shutdown (the vast majority of DHS employees and services would be unaffected) just a few days away, Democrats refused to even consider any measure that didn't give them exactly what they wanted: A "clean" funding bill that stripped out any opportunity for Republicans to use their power-of-the-purse leverage -- bestowed on them by voters -- to defeat Obama's amnesty fiat, which the electorate also rejected.  And true to form, fractured Republicans caved, rewarding Democrats' dishonest intransigence:

Senate Majority Leader Mitch McConnell said Tuesday that he is willing to have a vote on a funding bill for the Department of Homeland Security free of controversial provisions unraveling President Barack Obama’s actions on immigration — bending to Democratic demands for a so-called “clean” funding measure...McConnell (R-Ky.) outlined a strategy that would entail one vote on funding DHS — whose money runs out after Friday — through the end of the fiscal year on Sept. 30, and a separate vote on Friday that would block the sweeping moves on immigration that Obama issued last fall...Immediately after McConnell spoke, however, Reid said he first wants assurances from Speaker John Boehner (R-Ohio) that the GOP-led House will also pass the clean funding bill. Such a measure would face a steep climb in the conservative chamber because it would end the GOP’s attempt to use the DHS funding to foil Obama on immigration.


McConnell relented, and Reid (effectively acting as the majority leader) decided to rub Republicans' noses in it by holding out and issuing further demands of House Republicans.  Reid eventually backed away from this astoundingly obnoxious posture, but he'd already made his point.  Senate Democrats' obstructionism worked, allowing the pressure to shift back to the House of Representatives, which did its job weeks ago.  And thus, a story about Democrats threatening a national security-related shutdown in order to protect a widely-opposed Obama policy is shifting into a story about those 'extreme' House Republicans again.  This is the dynamic that Democrats repeatedly exploited between 2011 and 2015, with the press happily along for the 'blame-Republicans' ride.  When the GOP took control of the Senate in January, Democrats' playbook theoretically became obsolete: At long last, they'd be the ones resorting to procedural tactics (and vetoes) to block bills and avoid debate.  They'd finally be on the uncomfortable end of certain political pressure points.

A functional, strategic Republican majority would have called up votes on the House DHS bill every single day, creating a ticker counting the number of times Democrats "filibustered national security funding."  They'd have spoken with one voice in the media, decrying their opponents' nihilistic and hypocritical shutdown zeal, and demanding that Harry Reid "at least allow debate to commence on this critical legislation."  They'd have honed in on Democrats' weak links with targeted blitzes against red and purple-state Senators, correctly casting them as stooges who were "placing Obama's divisive amnesty above national security."  In fairness, many Republicans attempted this messaging strategy, but a lack of unity and fortitude doomed their effort to failure.  Before you pin the blame on Mitch McConnell, remember that his options were gutted by people like John McCain and Lindsey Graham, who practically recited White House talking points on DHS funding every single day.  ("Leave it to the courts," they say, breezily abandoning their Constitutional role as elected members of the legislative branch).  Democrats predictably applauded, and the media dutifully quoted them with prominence.  Also remember that some members of McConnell's caucus were telegraphing eventual capitulation from the very beginning.  That's the crew McConnell's trying to lead.  The offending Senators' commitment to national security isn't in question; their judgment and ability to grasp middle and long-term strategy most certainly is.  Hopeless.

Perhaps most egregious of all, Senate Republicans somehow timed their cave job to align perfectly with President Obama's Keystone veto -- the ludicrous rationale for which is truly jaw-dropping in its audacity.  Here we had a president openly exposing his rhetoric about pragmatism and unity as an utter fraud, serving up a wet kiss to wealthy special interests (offering another chance to highlight his hypocrisy).  He nixed a massively popular, job creating infrastructure project that garnered 332 bipartisan votes in Congress -- and would cost taxpayers zero dollars.  This veto was nothing less a sharp stick in the eye of bipartisanship, job creation, "middle class economics," and all the ideals and platitudes Obama loves to spout.  And on that day, of all days, Republicans decided it was time to back down and free Obama and Democrats from their self-made shutdown/amnesty trap.  Bravo.  By the way, the second half of McConnell's "compromise" involves bringing up a separate bill that forbids Obama's unilateral immigration orders from moving forward.  Sen. Joe Manchin (D-WV) has announced that he'll vote with Republicans when the time comes.  Others may, too.  But so what?  Republicans relinquished their leverage, as well as the opportunity to draw "shutdown" blood -- all while sending a message about future budget skirmishes.  Instead, they're handing Reid and Obama what they want (the "clean" DHS bill) and furnishing moderate Democrats with a handy opportunity to cast a meaningless vote "against" Obama's amnesty.  Even if the GOP were to break an inevitable filibuster on the stand-alone, anti-amnesty bill with Democratic help, Obama would instantly veto the resulting measure the moment it reaches his desk.  He's made it abundantly clear that he doesn't give a rip about Congress' will; plus, that veto would be far less embarrassing and politically painful than one that, say, prolonged a controversial Democrat-caused shutdown.  Luckily for him, he won't have to think about such unpleasantness.

The resulting outcome is a total victory for Democrats.  Obama gets a win on a day that should have been reserved for non-stop, richly-earned Keystone bashing.  Reid's "hostage taking" and Orwellian propaganda prevails, and Democrats' stubborn discipline is reinforced as effective.  John Boehner is thrust back into the horrible position of figuring out what to do next, with the clock ticking and a turn-key 'blame-Republicans' script written against him...helpfully provided by fellow Republicans, no less.  And vulnerable Democrats get to tell the folks back home that they avoided a Homeland Security shutdown and "stood up to" the administration via empty, Republican-supplied show votes.  Even an immigration "squish" and infamous RINO like yours truly has no choice but to call this what it is: A comprehensive strategic catastrophe.