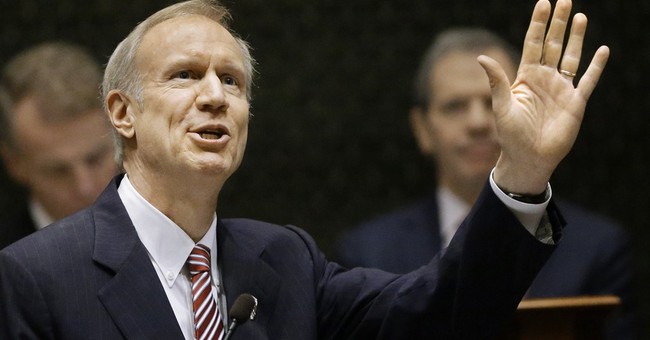 Newly-elected Illinois Governor Bruce Rauner, a Republican, has hit the ground running in his mission to fulfill his campaign promise of "shaking up Springfield." The state's capital is, after all, a town in dire need of leadership and root-and-branch reforms. Illinois has earned the worst credit rating in the nation, its unpaid-for government employee pension obligations are astronomical, its tax climate has chased away businesses and families alike, and the state government is unable to pay its bills. The Land of Lincoln is broke. For years, a cabal of unions, Democrats and activist judges have waged a self-interested war against fiscal sanity (when Democrats attempted to implement even a mild form of pension reform, a state judge struck it down because statists wrote public pension "protections" into the state constitution). Governor Rauner -- a successful private sector businessman -- was elected by his blue state voters to sift through the wreckage and forge a sustainable path forward. His opening salvo was an unmistakable warning shot to public sector unions, prompting hysterical shrieking from the usual quarters:

On Monday [Rauner] essentially declared war on the incredible power of public sector unions, declaring by executive order that state workers who did not want to join unions could not be forced to pay "fair share" dues. From the Chicago Tribune: "Anticipating a strong pushback from organized labor, Rauner filed a pre-emptive federal lawsuit in Chicago seeking to have his decision declared legal. But the move likely will spark additional court battles as unions quickly decried the effort as an illegal abuse of power. It's also possible Democratic lawmakers could vote to overturn Rauner's executive order. Under state law, employees can decline to join a union but are still on the hook for 'fair share' fees related to collective bargaining and contract negotiations. The idea is that if all employees are getting the benefits from a new contract, everyone should contribute to the cost. Illinois statute prohibits those fees from being used to support political activities, but Rauner contended it's nearly impossible to draw a distinction because public sector unions directly negotiate with the government."


Other state officials are refusing to implement the Executive Order until the courts rule on it.  Rauner has now introduced a budget, packed with reforms, that has Democrats and their union donors/benefactors squealing.  Here he is laying out his case before the state legislature.  His tone is calm and at times disappointed.  He's methodical and authoritative.  He invokes the basic math.  He spells out the depths of Illinois' fiscal hole, without sounding overly demagogic.  And he holds out hope for a bipartisan temporary budget fix, before warning that getting Illinois' house back in order over the long term will require massive changes to benefit structures and spending priorities.  These reforms won't impact (unrealistic) promises that have already been made, he says, but they need to be implemented for new employees and contracts.  Start four minutes in, and watch through the 27 minute mark:


We must be willing to take actions we’d rather avoid, and make decisions that may seem unpopular in the short run. The budget outlined today is the budget Illinois can afford, and that in itself is an example of “thinking anew.” Because for far too long we have been living beyond our means—spending money that Illinois taxpayers could not afford. This budget is honest with the people of Illinois, and it presents an honest path forward. Like a family, we must come together to address the reality we face. Families know that every member can’t get everything they want. But we can pay for what we need most. And we can reform our system so we are able to invest more in the future. Because the task before us is so large, all our challenges cannot be solved by a single budget. It will take time to restore Illinois to fiscal health. Now is the time to start on a responsible path after years of financial recklessness. Instilling discipline is not easy, saying “no” is not popular - but it is now or never for Illinois.


What struck me as I watched this address is how Democrats, who control both chambers and who are primarily responsible for the current crises, sat on their hands throughout most of the address. Rauner's applause lines, many of which were meant to convey the gravity of the state's unpleasant fiscal reality, were greeted with faint clapping from minority Republicans alone. One of the few sentences that elicited a positive reaction from members of the majority was Rauner's reference to tax increases (which he said are not the solution to Illinois' myriad problems, arguing that asking taxpayers for even more money would make the state less competitive and undermine public confidence).  Chicago Tribune columnist John Kass calls Rauner "Scott Walker on steroids:"

Yet these are but mere crumbs to the crusty loaf Gov. Rauner served up in his state budget message on Wednesday, a challenge to entrenched Democrats and the public unions that help elect them. Rauner pushed to move newly hired public employees into a pension system more in keeping with what taxpayers have in the private sector, rather than the old-fashioned government meat-gravy-and-more-meat-and-gravy pensions. There are thousands of state employees with six-figure public pensions, Rauner said, an unconscionable luxury while so many taxpayers wonder whether Cholula sauce will improve the dry dog food we’ll be eating when we’re old. Rauner’s budget, he said, will end “the irresponsible and reckless practices of the past, and make sure they will never happen again. We make difficult choices that no one wants to make. It is what this occasion requires."


The malignant Illinois teachers unions have already labeled Rauner's budget changes "clearly illegal," arguing that his reforms won't "solve the state's problems at all."  They have zero credibility, and must be ignored.  Rauner's budget calls for an increase in funding to education, but that's not what the union bosses are interested in.  They're focused on protecting their benefits racket that's plunged the state into chaos.  In the end, Rauner isn't exactly Scott Walker on steroids:

@guypbenson He is Scott Walker without the legislature to back him up. He's going to have to be creative and persuasive. Good start so far.


Bingo. He's Scott Walker without the Republican majorities. And with a more corrupt state bureaucracy. And with even more out-of-control unions. And with much, much worse state finances to clean up. Even if Rauner and Democrats come to an agreement to close this fiscal year's $1.6 billion budget shortfall, he said, the state still faces $6.2 billion in red ink next year. And then there's the issue of $111 billion in unfunded public pension obligations. Bruce Rauner is doing his best to pull Illinois back from the brink, and he'll have the selfish, status quo nihilists fighting him with brass knuckles every step of the way.