What Should Republicans Do if SCOTUS Strikes Down Federal Subsidies? 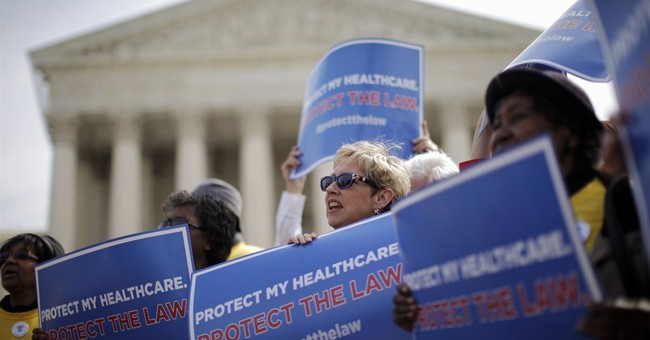 By now you're aware of the red hot 'federal subsidies' controversy, yes?  The star of the show at the moment is one Jonathan Gruber -- a famed economist and top Obamacare architect -- who's been caught repeatedly lying about the law he helped design, while smirking about the "stupidity" of the American people.  Gruber's performance has become so harmful to The Cause that Nancy Pelosi is now pretending she doesn't know who he is:

Pelosi today: Gruber who? http://t.co/HGa6eprNOG Pelosi in 2009: Jonathan Gruber is so right about #ObamaCare. #TBT http://t.co/skl8r55Stx


One can only hope that Jim Jordan's call for hearings featuring Gruber is heeded.  The more people who know about and hear from this guy, the better.  But let's fast forward a bit to next June and entertain a hypothetical scenario that could very well become reality.  Let's say the Supreme Court reads the text of Obamacare as written and determines that it means what it says: Only consumers in states that set up their own exchanges are eligible for taxpayer subsidies. The immediate consequence would be that most Obamacare consumers, who live in the majority of states that declined to do so, would be denied sizable tax credits that offset the law's high costs, because that's what the law requires -- as written and rammed through by Democrats.  (And again, this isn't an oversight or a "typo."  Alternative language was removed from the legislation, and Gruber has confirmed on multiple occasions the coercive designs of this legislative "stick"). The result would be a crushing blow to Obamacare's structure and would further underscore the fatally flawed nature of a law that needs to be uprooted and replaced.  To that end, two prominent Republicans are teaming up to craft a comprehensive alternative to the law.  The media has ignored numerous "replace" proposals offered by other Republicans; it'll be a lot harder for them to dismiss Marco Rubio and Paul Ryan.  Back to our hypothetical.  Let's stipulate for the sake of argument that Congressional Republicans (a) use reconciliation to repeal Obamacare, (b) coalesce around a replacement bill, and (c) pass that alternative through both houses.  Thus, two bills end up on the president's desk.  Repeal and replace.  What's next?  A double veto, without question.  Republicans do not have the votes to override those vetoes.  So then what?  That question prompted a lengthy Twitter debate among myself and fellow Obamacare opponents Philip Klein, Matt Lewis and Hugh Hewitt.  Click through to read the exchange.

The argument I advanced arises from political and policy concerns.  If Obamacare's federal exchange subsidies are (properly) gutted by the Court, there will be real-world ramifications.  Millions of lower-income people will suddenly face shockingly, prohibitively high costs, and they'll be stuck either trying to pay the full freight, or dropping out of coverage.  This would be a human tragedy.  Make no mistake: The Obamacare crowd would be responsible for these consumers' plight, but correctly assigning political blame won't diminish the reality of that plight.  As a result, the Left would instantly jump all over Republicans in Congress, demanding a "simple fix" to the problematic "typo."  All the GOP has to do, they'd argue, is pass a one-sentence bill clarifying that Americans who obtain coverage through Healthcare.gov are eligible for subsidies.  Are these heartless, nihilistic, mean-spirited Republicans really willing to actively hurt so many low-income people in order to once again demonstrate their hatred of the president?  That will be their indignant narrative, and the media will go along with it.  Americans who would benefit from the "fix" will be paraded in front of the cameras.  Some nervous Republicans might start to peel off.  The political shinola storm would be powerful.  Meanwhile, pressure would ratchet up on states to implement exchanges, while the administration would cast about for ways of bypassing Congress, which they do habitually.  It goes without saying that Democrats would roundly disclaim responsibility for the mess they exclusively created, just as they'll endlessly repeat the "typo" lie.

How should Republicans respond?  Not responding isn't a viable option.  My suggestion -- and this is just early stage spitballing -- is for the GOP to consider offering a package of "fixes" that includes the rudimentary change for which Democrats will be howling (remember, this all assumes that repeal/replace was already attempted and blocked by Obama).  Included in the package deal would be a series of alterations to the law that Republicans have been seeking for some time, that are very popular with the public, and that would ultimately serve to undermine the law.  For instance, eliminating the individual mandate tax, restoring the 40-hour work week, and repealing the medical device tax.  The GOP would have real leverage and popular opinion at their backs on these points.  Message: "Because we care about the people who are once again getting screwed by Obamacare, we're willing to make the fix President Obama is demanding.  But while we're at it, we must make some other necessary changes that enjoy broad popular support.  This is what compromise looks like in divided government, which is what the American people decisively voted for.  And in case you've forgotten, American, we've been against this trainwreck from the start, and we've since passed a much better alternative, which the president has stubbornly vetoed."

Executing this play, or something like it, would reverse some of the political pressure dynamics.  Obama and the Democrats would have to decide whether they're willing to reject the fix they're vociferously demanding in order to kill popular additional "fixes" to the law.  Conservatives could benefit from whatever decision is made.  If Obama vetoes the package, Republicans can hammer away at him, credibly casting him as the recalcitrant, uncaring ideologue.  At the very least, they'd have a strong, easily-explained counterpunch argument at their disposal that would complicate Democrats' turnkey spin.  If Obama begrudgingly signs it (which I suspect is unlikely), the GOP walks away with a string of policy victories that weaken the overall law.  They've been angling for these changes for some time, but have lacked the right sort of leverage to achieve them.  Phil Klein repudiates my idea, saying that it would be a terrible betrayal.  By agreeing to the central "fix," Republicans would be proactively authorizing hundreds of billions of dollars in Obamacare subsidies, which he says would be a political and policy catastrophe.  While I'm strongly sympathetic to this line of argument, I stand by my conviction that Republicans must be prepared with creative and thought-through plans to reckon with the inevitable and demagogic shrieks of outrage hurled at them if the Supreme Court rules correctly in this case.

My suggestion is admittedly imperfect.  I'm all ears for competing ideas.  But in my view, steadfastly refusing to act while simply blaming the law's authors for the present troubles is not a politically-sustainable course of action.  Republicans must be equipped with a savvy and productive strategy for navigating this potentially explosive standoff and winning the day.  I'll leave you with two pieces suggesting that Democrats' efforts to blame Republicans for federal subsidies-related upheaval might fail.  Regardless, the north star of Republican messaging on Obamacare should be relentless reminders of who wrote, passed and signed the law.  That's something about which all conservatives can agree.