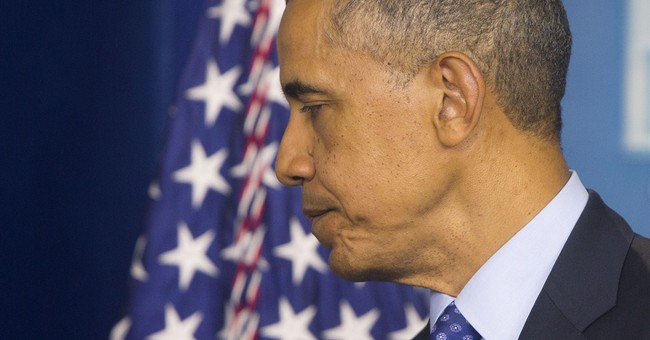 Barack Obama's signature legislative accomplishment -- jammed through Congress without a single Republican vote -- remains highly unpopular, is raising millions of Americans' rates, is costing taxpayers more than forecast, is harming the economy, and has vulnerable Democrats frantically ducking difficult votes. The law is impacting real people and real businesses. In Michigan, an end-of-life care facility has stopped accepting patients and will shut down years earlier than projected because of the new law:


This center sustained a smaller financial blow due to the 2013 sequester cuts, which were President Obama's idea. The White House bitterly turned against its sequester policy (which was implemented to pressure the 2011 Budget Control Act's "Super Committee" to forge a compromise deal), but threatened to veto Republican ideas to offer him increased flexibility, or to offset those spending cuts -- even though many of the GOP's proposals were drawn from Obama's own budget. But Obamacare was the bigger blow: “The biggest issue under the Affordable Care Act is that we’re going to see cuts in reimbursement -- it’s going to be at least 12 percent," Hospice of Holland Executive Director Torrey Husman told FOX 17. "We projected out what those cuts are going to do to the organization long term and we realized that in a short period of time, we’re going to be pulling money from our savings in order to keep the house open.” Rather than shuttering in four or five years as planned, the facility is closing in four weeks. Elsewhere in the Midwest, healthcare premiums are lurching higher. A major insurer in Iowa and South Dakota has announced its intention to increase consumers' rates next year:

About a quarter of a million Iowans would see their insurance rates rise next year should the state approve a request from Iowa's dominant health insurer. Wellmark Blue Cross and Blue Shield announced Friday that it is seeking to raise premium rates for 253,000 policyholders in Iowa. Those rate increases would affect individual policyholders and small businesses. Most — 92 percent — of the proposed rate increases would be less than 5.9 percent, according to numbers provided by Wellmark. For the remaining 7.5 percent of policyholders — those who have post-Affordable Care Act plans for individuals under 65 — Wellmark is asking for a rate increase between 11.9 percent and 14.5 percent.


Wellmark says the rate increases could have been even higher, as additional regional insurers are seeking hikes, as well:

Wellmark CEO John Forsyth told the Register that the Des Moines-based company could have pursued higher rate increases for next year. "I think it's fair to say that on these rates, we could have justified higher rates," Forsyth said. "If we were at the low end of our reserves, these rates would be consequentially higher." David Brown, Wellmark's chief financial officer, said on a typical plan with $300 in monthly premiums, the pre-ACA increases for an individual would equate to about $18 more per month. That number doubles, he said, for post-ACA plans. Wellmark's request to raise rates in 2015 comes less than a week after two other providers — CoOportunity Health and Coventry Health Care — said they are also seeking rate increases. CoOportunity is seeking to raise premiums by 14.3 percent; Coventry is seeking an average rate increase of 8.7 percent across the carrier's various plans.


Obamacare defenders will protest that premium increases pre-date Obamacare, and that Wellmark has boosted rates even higher in the past. First off, double-digit individual market increases are substantial, period. More importantly, Democrats pledged that the new law would lower everyone's rates -- by a handsome annual sum, no less. That simply is not happening. On the "access shock" side of the ledger, many DC exchange enrollees are struggling to obtain care, as reported by the Washington Post:

Consumers who signed up for private health insurance through the District’s new insurance marketplace are experiencing lengthy delays in getting coverage, in some cases two to three months long, because of problems processing their applications, according to residents and enrollment personnel. In some cases, delays are forcing people without insurance to postpone doctor and dental visits. The delays seem to be affecting coverage through CareFirst, the dominant carrier in the region, and Kaiser Permanente, according to consumers and enrollment personnel. Insurance and exchange officials have declined to say how many people are affected.


Signing up for coverage does not guarantee care. That's true in many causes because of access shock, but also because of vexing data discrepancy headaches caused by the law's horrendous rollout and Healthcare.gov's still-incomplete back end. Access problems under Obamacare has been one of the law's least welcome surprises for many consumers. A new Kaiser poll shows that exchange enrollees are less satisfied with their coverage than those who managed to keep their existing plans, by a double-digit margin. Four in ten enrollees report troubles paying the monthly premiums, in spite of massive subsidies (and not calculating high out-of-pocket costs). And those who have been actively hurt by the law continue to outnumber those who say they've been helped, also by a double-digit margin:

Latest Kaiser poll: Has Obamacare directly helped or hurt you and your family? Helped: 14%. Hurt: 24%. No direct impact: 60%.


That's a terrible outcome for a law billed as containing no trade-offs and featuring no losers. For what it's worth, I'd count myself among the 60 percent who haven't been affected too directly -- yet -- even though my large group market premiums jumped by more than $1,000 in 2014. Millions who say they haven't been impacted may suddenly lose their 'unaffected' misapprehensions when additional waves of policy cancellations and cost increases continue to wash ashore.